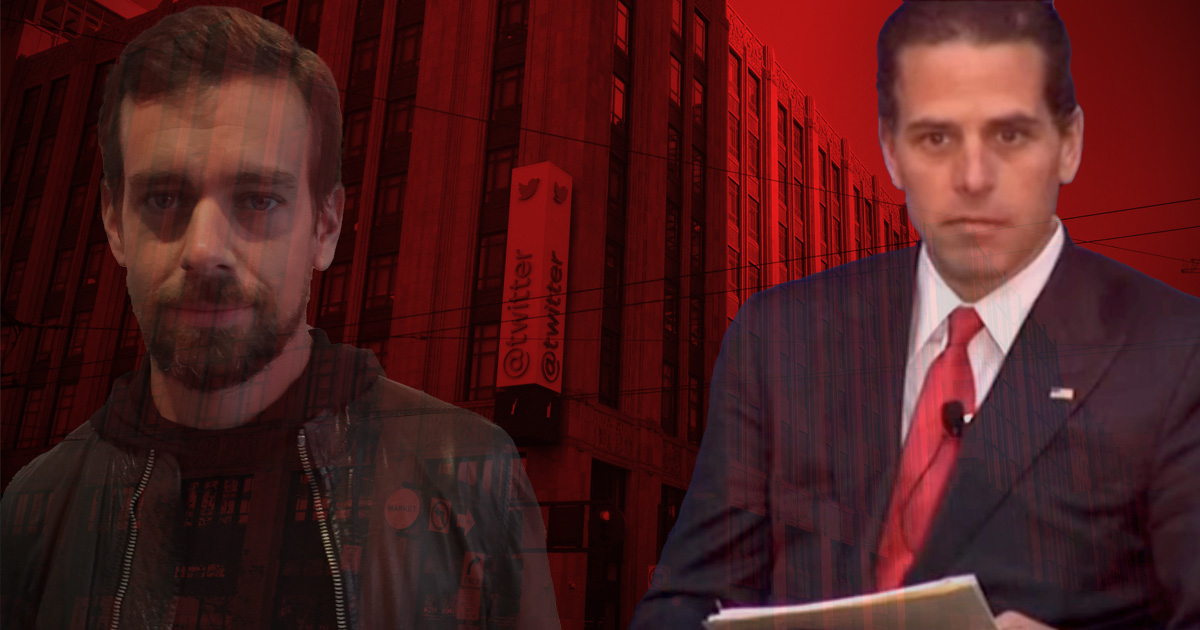 In the first of a series of posts known as The Twitter Files, new documents reveal the extent to which the Big Tech company covered up the Hunter Biden laptop story, including the fact that former CEO Jack Dorsey was not involved in the decision to censor it.

Journalist Matt Taibbi posted documents on Twitter revealing that the “Biden team” would send tweets to Twitter executives, which would then be “handled” by employees of the Big Tech company, in a process that Taibbi described as “routine.”

These could be tweets from average “unknowns,” or even high profile celebrities, with Taibbi providing the screenshot of an email showing that a tweet from conservative actor James Woods was flagged by the DNC. Taibbi noted both parties had “access” to these tools, but the system was unbalanced, as the vast majority of Twitter staffers were Democrats.

9. Celebrities and unknowns alike could be removed or reviewed at the behest of a political party: pic.twitter.com/4uzkHnQ65E

In October 2020, Twitter prevented the dissemination of the New York Posts’ Hunter Biden laptop story, which despite being confirmed as legitimate, was lambasted as “Russian disinformation” by the intelligence community and media commentators. As Taibbi noted, it was even blocked via direct messaging, “a tool hitherto reserved for extreme cases,” such as child pornography.

Then White House Press Secretary Kayleigh McEnany was one of many to be locked out of their Twitter accounts for posting about the Biden laptop story. Trump staffer Mike Hahn proceeded to send a furious email to Twitter executives, pleading with them to “at least pretend to care for the next 20 days” before the election was over.

19. White House spokeswoman Kaleigh McEnany was locked out of her account for tweeting about the story, prompting a furious letter from Trump campaign staffer Mike Hahn, who seethed: “At least pretend to care for the next 20 days.” pic.twitter.com/CcXTfsdzCT

Internal Twitter emails between public policy executives and the Trust and Safety team confirms that users were being removed for allegedly violating the “hacked materials” policy, despite no evidence to suggest any hacking was involved.

Taibbi claimed that the decision was “made at the highest levels of the company, but without the knowledge of CEO Jack Dorsey,” and that Vijaya Gadde, the head of Trust and Safety at the time, had played a “key role” in ensuring discussion around the laptop was censored.

According to a former Twitter employee cited by Taibbi, the decision was just “freelanced,” and done without much thought. “Hacking was the excuse, but within a few hours, pretty much everyone realized that wasn’t going to hold. But no one had the guts to reverse it,” the employee allegedly said.

In fact, Taibbi claimed that to rule on the “hacked materials” policy, a usual requirement was some sort of official or law enforcement ruling, which “never appears” during the 24-hour “whirlwind” of decision making, as one executive described it.

Further internal emails show employees saying that they will “face hard questions” if they have no “solid” basis as to mark the link to the New York Post story as being unsafe. A former employee quoted by Taibbi said that many on the Twitter staff “knew this was f**ked.” Despite many senior employees questioning the decision, Twitter continued to block the story.

26. By this point “everyone knew this was fucked,” said one former employee, but the response was essentially to err on the side of… continuing to err. pic.twitter.com/2wJMFAUBoe

Taibbi claimed that the emails portray then-CEO and co-founder Jack Dorsey as being unaware of the censorship, adding that it took a long time for everything to be “unf**ked” after he stepped in.

One screenshot shows Dorsey sharing an article from Taibbi himself, criticising the censorship at the time, with Taibbi also claiming that Dorsey intervened multiple times to “question suspensions and other moderation actions for accounts across the political spectrum.”

There are multiple instances in the files of Dorsey intervening to question suspensions and other moderation actions, for accounts across the political spectrum

Further email exchanges revealed that Republican politicians were furious with Twitter’s decision. Carl Szabo of NetChoice,  a lobby group for companies including Facebook, Twitter, and Google, and the Computer and Communications Industry Association, who had previously tried to block pro-free speech tech laws in Florida and Texas, relayed anger from the Capitol.

Szabo told head of Public Policy Lauren Culbertson that after talking to staffers (not Representatives as Taibbi erroneously claims) on both sides of the aisle, he predicted a “blood bath” in hearings, with every Republican saying this was a “tipping point,” and one calling it Big Tech’s “Access Hollywood moment.”

34.NetChoice lets Twitter know a “blood bath” awaits in upcoming Hill hearings, with members saying it's a "tipping point," complaining tech has “grown so big that they can’t even regulate themselves, so government may need to intervene.” pic.twitter.com/2EE1NlWQ5k

However, the Democrat staffers were primarily angry that Twitter had made “the Biden campaign look corrupt even though Biden is innocent,” and as a result, would be set to demand more moderation on social media, because it’s “corrupting democracy.” They even went so far as to say “the First Amendment isn’t absolute.”

The release of the first run of the Twitter Files follows the challenging of Musk’s new Twitter regime by Yoel Roth, the former Head of Trust and Safety on the platform, who said that Twitter had become less safe under Musk’s control.

In response to a user highlighting the story, Musk claimed that “the obvious reality, as long-time users know, is that Twitter has failed in trust & safety for a very long time and has interfered in elections,” and added that Twitter 2.0 will be “far more effective, transparent and even-handed.”

Exactly. The obvious reality, as long-time users know, is that Twitter has failed in trust & safety for a very long time and has interfered in elections.

Twitter 2.0 will be far more effective, transparent and even-handed.

After finalising the purchase of the company, the executives involved in the censoring of the Biden laptop story, including Gadde, were immediately fired by Musk.

On Friday, Musk announced that at 5PM EST, “what really happened with the Hunter Biden story suppression by Twitter” would be published on the Big Tech platform. He added that there would be a live question and answer session with him on Twitter to discuss the story.

This deadline was not met, as Musk informed his followers that he and his team were “double-checking some facts” before publishing the information, estimating another 40 minutes before it was released.

We’re double-checking some facts, so probably start live tweeting in about 40 mins

A number of Musk’s followers joked that the delay was caused by nefarious forces who did not want Musk to release the information.

“The CIA gave me a call, we’re letting them scrub necessary information before releasing”.

We need you to check in with us every 5 minutes. A wellness check. There are people out there who do not want this information to come out.

Musk eventually posted the link to the thread by Taibbi. “Here we go!!” Musk tweeted, accompanying his post with two popcorn bucket emojis.