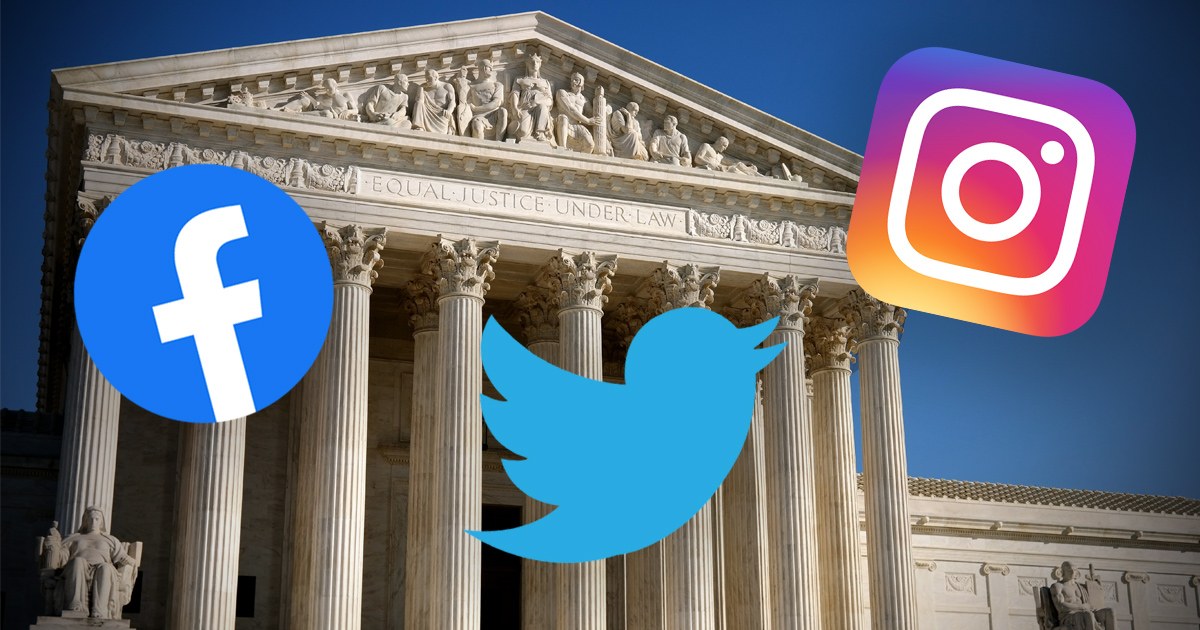 The Supreme Court has voted to temporarily block a Texas law that is designed to prevent Big Tech sites from unfairly censoring people based on their viewpoints.

Chief Justice John Roberts, along with Justices Brett Kavanaugh, Amy Coney Barrett, Sonia Sotomayor, and Stephen Breyer, all voted to block HB20 from being enforced in Texas against Big Tech companies while the merits of the legislation were being discussed in the 5th Circuit Court of Appeals, who lifted a previous temporary injunction against the case by a district court last month.

HB20 is designed to regulate public social media platforms with over 50 million active American users a month. It prohibits the sites from being able to “censor” users based on viewpoint, and also requires them to publish various information including their acceptable use policies and a “biannnual transparency report.” An appeals method for banned posts must also exist.

NetChoice, a lobby group for companies including Facebook, Twitter, and Google, and the Computer and Communications Industry Association, demanded the Supreme Court block the legislation, claiming it went against their First Amendment rights to “not disseminate speech generated by others,” along with interfering with their “editorial discretion.”

However, Texas argued that HB20 does not require the hosting of any particular message, but only requires the social media companies to not discriminate against users or posts based on a particular viewpoint.

Big Tech sites with over 50 million active American users have “carrier-like market power and this power gives them an ‘opportunity to shut out [disfavored] speakers’,'” Texas noted in arguments.

JUST IN – US Supreme Court blocks Texas social media law that would prevent big tech platforms like Twitter from banning users based on political views.

The state further highlighted that the fact that these same Big Tech platforms claim protection under Section 230 of the Communications Decency Act, which applies only to neutral platforms, not publishers, “the Court should view their assertions of a First Amendment right to engage in ‘editorial discretion’ with some scepticism.”

Related  WHO Declares 'Monkeypox' Too Racist, So Now It's 'Mpox'

Authoring the dissenting opinion, Justice Samuel Alito said for an injunction like this to go forth, the Big Tech companies have to argue that under current case law, they would definitively win against Texas in court, but that it was “not at all obvious how our existing precedents, which predate the age of the internet, should apply to large social media companies”:

“I reiterate that I have not formed a definitive view on the novel legal questions that arise from Texas’s decision to address the ‘changing social and economic’ conditions it perceives. But precisely because of that, I am not comfortable intervening at this point in the proceedings. The preliminary injuction entered by the District Court was itself a significant intrusion on state sovereignty, and Texas should not be required to seek preclearance from the federal courts before its laws go into effect.”

Justice Alito was joined in his dissent with Justices Clarence Thomas and Neil Gorsuch. Justice Elena Kagan also voted against the temporary measure, but did not join onto Alito’s dissenting opinon.

“Texas’s HB 20 is a constitutional trainwreck – or, as the district court put it, an example of ‘burning the house to roast the pig’,” said NetChoice in a statement celebrating the decision. “We are relieved that the First Amendment, open internet, and the users who rely on it remain protected from Texas’s unconstitutional overreach.”

The legislation functioned in a similar manner to a piece of Florida legislation that was struck down by the 11th Circuit Court of Appeals last month. Under the legislation, any social media companies that unduly removed a candidate standing in a Florida election from their platforms would be subject to daily fines, and other penalties.

Brian Griffin, a spokesman for Governor DeSantis, said that the decision was “stupefying,” and noted that they were considering appealing the case. NetChoice, on the other hand, praised it. “The First Amendment protects platforms and their right to moderate content as they see fit, and the government can’t force them to host content they don’t want,” said Vice President Carl Szabo.