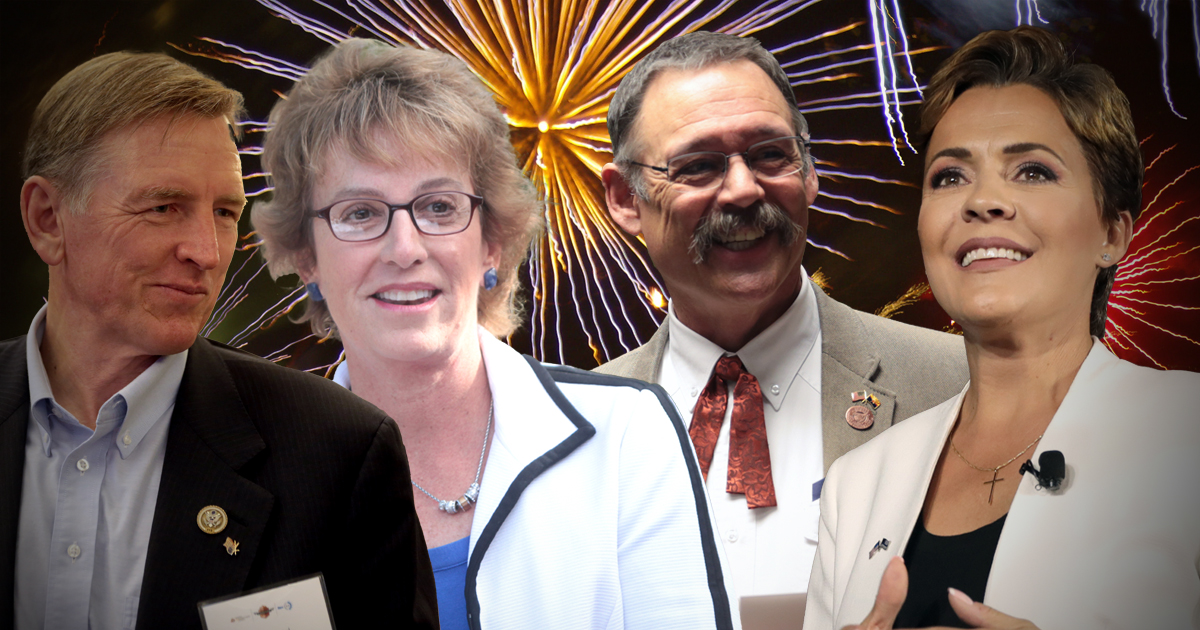 Trump-endorsed candidates appear to have won across the state of Arizona, with Mark Finchem, Kari Lake, Paul Gosar, and Wendy Rogers all winning or set to win their primaries, potentially signalling 45th President Donald Trump’s influence at both the state and local levels.

As Valiant News reported, the first win for America First in Arizona came with Blake Masters, who Trump described as an “incredible guy, a very smart person, and an America First fighter” during an endorsement video in June, stating that he believes Masters will “protect our border, he stands for life, and he’s strong on election fraud.”

Masters will face off against incumbent Sen. Mark Kelly in the upcoming election. Kelly has held the seat since winning in 2020, when he was elected to finish John McCain’s term.

While all the votes in the GOP Arizona gubernatorial primary are yet to come in, Kari Lake has already declared victory, with a growing lead over her opponent, Karrin Robson.

Dave Wasserman, the US House Editor for the Cook Political Report, noted that with more election-day ballots being counted, “it doesn’t look like she’s giving [the lead] back.” Other election analysts have already called the race for Lake.

“We have the ideas. We have the policies. And we are going to win this. 100%,” Lake said on Tuesday night.

“I don’t want any of you to not believe that. When they count the votes, we are going to win this and there is no path to victory for our opponent. And when we get into office, we are going to reform our elections once and for all.”

Kari Lake claims victory in Arizona: "We are going to win this." pic.twitter.com/lcSqKD88eX

Meghan McCain, the daughter of the late Arizona Senator and RINO John McCain, also declared that Lake had won the primary, but wasn’t too happy about it.

“I see my initial predictions were right despite the initial excitement of Robson pulling ahead,” she tweeted. “Congratulations to my home state for full [sic] making the transition to full blown MAGA/conspiracy theory/fraudster. The voters have spoken – be careful what you wish for…”

Congratulations to my home state for full making the transition to full blown MAGA/conspiracy theory/fraudster.

The voters have spoken – be careful what you wish for…

The other major state wide-office won by an America First candidate was the Secretary of State, with Mark Finchem, a former member of the Arizona State Legislature, and election integrity fighter, who repeatedly criticised the problems seen in the 2020 presidential election.

“16.5% victory is a mandate! Thank you to all of you for the support. The people of Arizona have spoken,” Finchem said in a social media post.

“They want secure elections & someone to stop the fraud. We won every county with both the mailed in ballots & the election day vote. On to the general.”

16.5% victory is a mandate! Thank you to all of you for the support. The people of Arizona have spoken. They want secure elections & someone to stop the fraud. We won every county with both the mailed in ballots & the election day vote. On to the general. #ElectionIntegrity pic.twitter.com/IHjAjdEyhu

State Sen. Wendy Rogers, one of the most prominent supporters of Trump and the America First agenda on a local level in Arizona, solidly defeated her primary opponent, State Sen. Kelly Townsend, with the two competing against one each other due to redistricting.

Rogers had been repeatedly attacked by Townsend for her association with web show host Nick Fuentes, and for sending a video message to his conference, AFPAC. Rogers retaliated by framing Townsend as a candidate who favors political correctness and engages in cancel culture.

“I am so grateful to all of you,” Rogers tweeted. “With over $132K in swamp lobbylist PAC money spent against me, we won big – 18%+ – and our margins are improving as more ballots are counted.”

“This means that The People want secure borders, secure elections, law and order,” wrote Rogers. “The ‘Sweet Grandma’ is going back in to fight for you!”

I am so grateful to all of you. With over $132k in swamp lobbyist PAC money spent against me, we won big – 18%+ and our margins are improving as more ballots are counted. We won the mail-in ballots. We won the election day ballots. We won every county. We won the parts of my /1 pic.twitter.com/ynkLXNhOv5

voice! The ‘Sweet Grandma’ is going back in to fight for you. Thank you again. America First! /3

Incumbent Representatives Andy Biggs and Paul Gosar also both won their primaries with ease, setting themselves up to be re-elected to Congress in November.

Gosar and Biggs, along with Finchem, had faced a lawsuit earlier this year that attempted to remove them from the ballot, slamming them as “insurrectionists” for their support of Trump.

“The 118th Congress is coming,” Gosar tweeted, following his victory. “Mark my words: America First will be back. With a vengeance.”

The 118th Congress is coming.

America First will be back.

Many had suggested Arizona would pose a referendum on Trump’s influence over the Republican Party. Some believed Pence’s presence would secure victory for establishment-backed candidates after he endorsed notorious Trump enemy Brian Kemp in Georgia, who won his primary against a Trump-endorsed challenger.