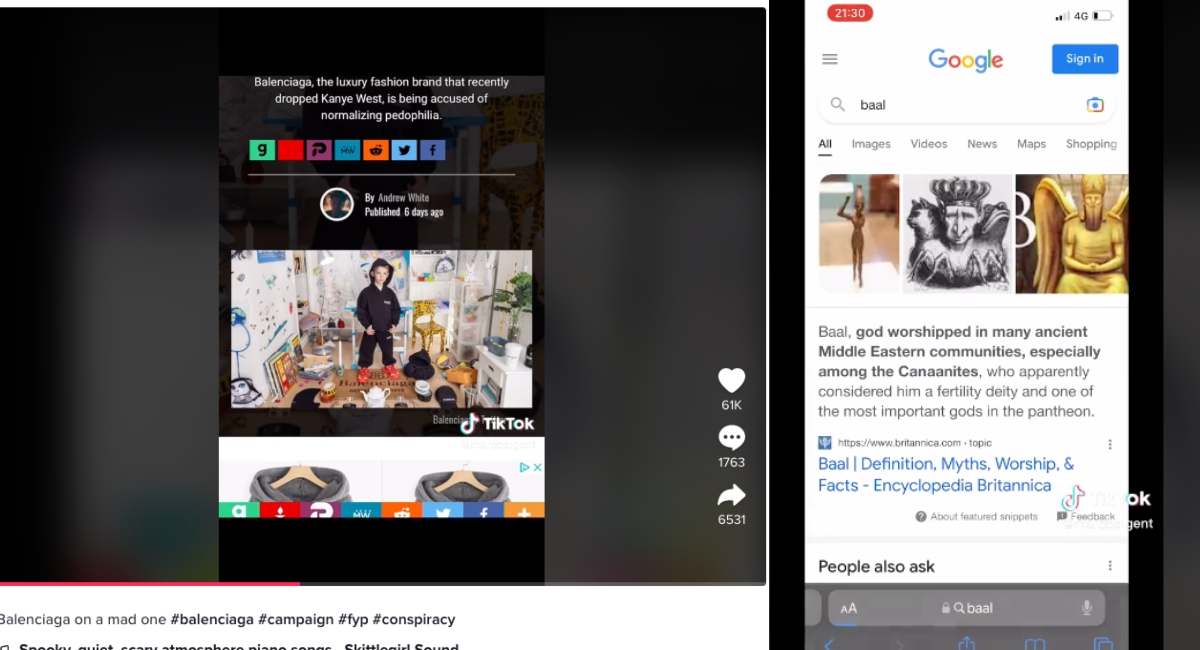 A TikTok featuring Valiant News reporting on Balenciaga’s controversial ad campaign has gone viral online, amassing over 1 million views on the platform in less than 24 hours.

The video details five strange observations regarding Balenciaga’s ad campaign photos, one of which was included as the featured image in a Valiant News article, but was originally sourced from the fashion designer’s own website.

As noted by the narrator, one of the Balenciaga photos appears to show “a child’s drawing of the devil” and a “random black hood perfectly placed and tied,” which the user says is “resembling of a satanic cult.”

Watch the viral TikTok on Spreely.video:

The viral TikTok then zooms into a what appears to be a roll of duct tape in the Balenciaga photograph, which includes a misspelling of the brand to include two “A’s,” spelling out “BAALENCIAGA.”

The user claims that the misspelling of the word alludes to Baal, a satanic fertility god that is associated with child sacrifice and other dark pagan practices.

“Even the trainers look like the Devil staring you in the face,” the narrator says of the child’s red shoes in the photograph. “Note the candles on the opposite side to the hood.”

A TikTok posted by a user named marcbaigent featuring Valiant News reporting on the Balenciaga controversy has amassed over 1.1 million views in less than 24 hourshttps://t.co/7OtYjU07sR pic.twitter.com/TYNqAgm6Xv

The user then points to the teddy bear placed on the far left corner of the photograph, which appears to be dressed in BDSM-style lace clothing.

“Lastly, one of the dolls with a padlock on its neck, coincidence?” the TikTok states.

Reality television star Kim Kardashian announced that she will be “re-evaluating” her relationship with Balenciaga as the designer company continues to face widespread scrutiny over appearing to sexualize children in a controversial ad campaign, Valiant News reported earlier on Monday.

Kardashian was previously called out for her noted silence on the brand’s controversial ad campaign that featured small children.

Last week, her silence was taken as an implied endorsement of the brand, and reports circulated indicating that Kardashian would continue her business relationship.

“I have been quiet for the past few days, not because I haven’t been disgusted and outraged by the recent Balenciaga campaigns, but because I wanted an opportunity to speak to their team to understand for myself how this could have happened,” Kardashian ultimately wrote in a Twitter thread on Sunday.

“As a mother of four, I have been shaken by the disturbing images. The safety of children must be held with the highest regard and any attempts to normalize child abuse of any kind should have no place in our society — period,” she said.

As a mother of four, I have been shaken by the disturbing images. The safety of children must be held with the highest regard and any attempts to normalize child abuse of any kind should have no place in our society — period.

“I appreciate Balenciaga’s removal of the campaigns and apology. In speaking with them, I believe they understand the seriousness of the issue and will take the necessary measures for this to never happen again,” she added.

Kardashian concluded, “As for my future with Balenciaga, I am currently re-evaluating my relationship with the brand, basing it off their willingness to accept accountability for something that should have never happened to begin with — & the actions I am expecting to see them take to protect children.”

As for my future with Balenciaga, I am currently re-evaluating my relationship with the brand, basing it off their willingness to accept accountability for something that should have never happened to begin with — & the actions I am expecting to see them take to protect children.

After the bizarre images took the internet by storm, Balenciaga issued a public apology after reportedly scrubbing their social media accounts.

“We sincerely apologize for any offense our holiday campaign may have caused. Our plush bear bags should not have been featured with children in this campaign. We have immediately removed the campaign from all platforms,” Balenciaga wrote.

“We apologize for displaying unsettling documents in our campaign. We take this matter very seriously and are taking legal action against the parties responsible for creating the set and including unapproved items for our Spring 23 campaign photoshoot,” the company added.

According to a report by the New York Post, Balenciaga has filed a $25 million lawsuit against the producers of the controversial ad campaign, production company North Six, Inc., set designer Nicholas Des Jardins, in order “to seek redress for extensive damages defendants caused in connection with an advertising campaign Balenciaga hired them to produce.”