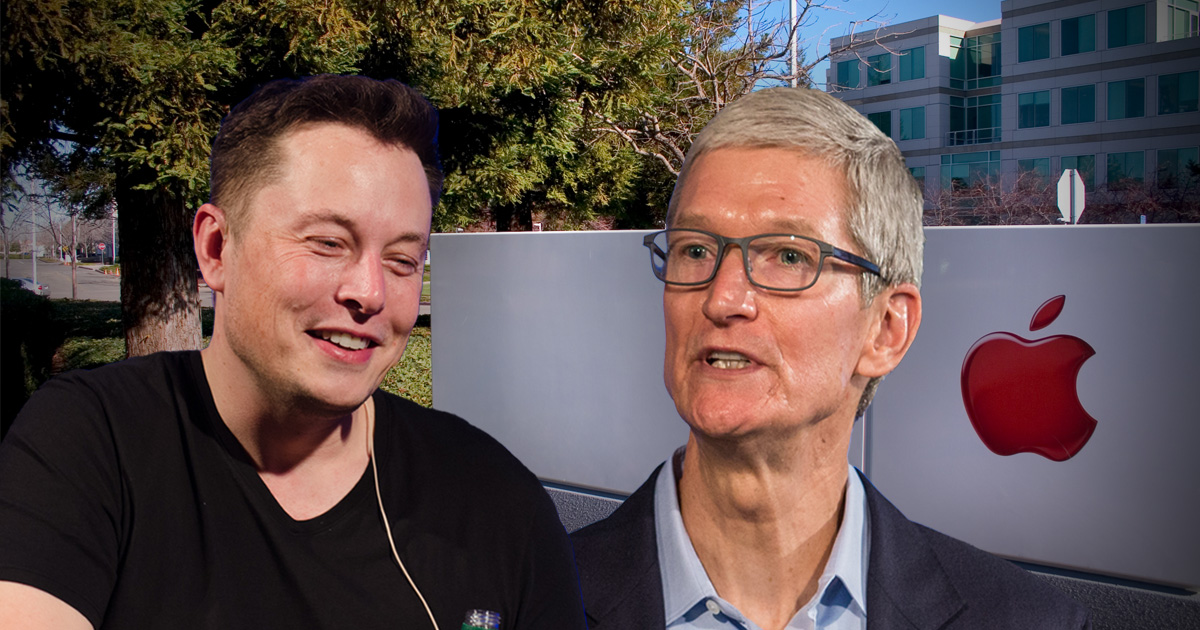 Elon Musk has claimed that Apple has threatened to “withhold” Twitter from their App Store, but refused to say why.

In a post to Twitter on Monday, the South African-born billionaire noted that Apple has “mostly stopped” advertising on the Big Tech platform. “Do they hate free speech in America?” he queried. Musk followed up by tagging CEO Tim Cook, and asked him what was “going on” with the decision to remove advertising.

This prompted a series of Twitter interactions that culminated in Musk appearing to declare war on his fellow tech giant.

LBRY, the cryptocurrency company behind alt tech video website Odysee, replied on Twitter, telling Musk that Apple once “demanded our apps filter some search terms from being returned,” during the COVID-19 pandemic.

These terms, Odysee told Musk, related to the origins of COVID-19 and the vaccines, and showed proof that Odysee was rejected from the company’s App Store because “users included Pepe images in videos.”

Musk argued that this was tantamount to “secret suppression of free speech by Apple,” as “customers were never told” what the App Store was doing. “What the hell is going on here?” he added.

Who else has Apple censored? https://t.co/lZculFIkAX

Secret suppression of free speech by Apple. Customers were never told. What the hell is going on here?

Following the discussion of censorship, Musk confirmed to Jake Kastrenakes, Deputy Editor at online tech magazine The Verge, that Twitter was being “threatened” by Apple that they would be withheld from the App Store, but noted that they “won’t tell us why.”

Apple has also threatened to withhold Twitter from its App Store, but won’t tell us why

The reveal that Apple had allegedly threatened Twitter’s position in the App Store follows last week’s news that Phil Schiller, the head of the App store, had deleted his verified Twitter account. Journalists and commentators at the time, including The Verge’s Alex Heath, said the move may signal “very bad news” for Twitter and Musk.

As Valiant News reported, Twitter under Musk’s control has unbanned a number of high profile conservatives, including 45th President Donald Trump. Musk had also announced that “hate tweets” would only be “max deboosted,” rather than being removed entirely. Tim Cook had previously said that Apple was counting on Twitter to continue to “moderate” what was posted.

The revelation from Musk comes as thousands of previously removed accounts were set to return to the platform, after Musk’s followers voted in favour of a “general amnesty” for all suspended accounts who had not “broken the law or engaged in egregious spam.”

Following the attention being drawn to censorship by Apple’s App Store, Musk decided to post another poll, asking his followers whether Apple should “publish all censorship actions it has taken that affect its customers.” At the time of writing, just under 440,000 people have voted, with over 86% of people agreeing that Apple should.

The self-appointed “Chief Twit” also discussed the “secret 30% tax” that the App Store applies to all products purchased through it, which he had previously argued could only be fixed via an anti-trust action launched against the “iOS/Android duopoly” by the Department of Justice.

Did you know Apple puts a secret 30% tax on everything you buy through their App Store? https://t.co/LGkPZ4EYcz

At this point, Musk posted a meme that suggested he would “go to war” with Apple rather than pay 30% of transactions made using Apple devices.

Among other considerations, Musk may be weighing whether to pay Apple a 30% cut of its new subscription revenue from the Twitter Blue program that allows users to become verified for $7 per month.