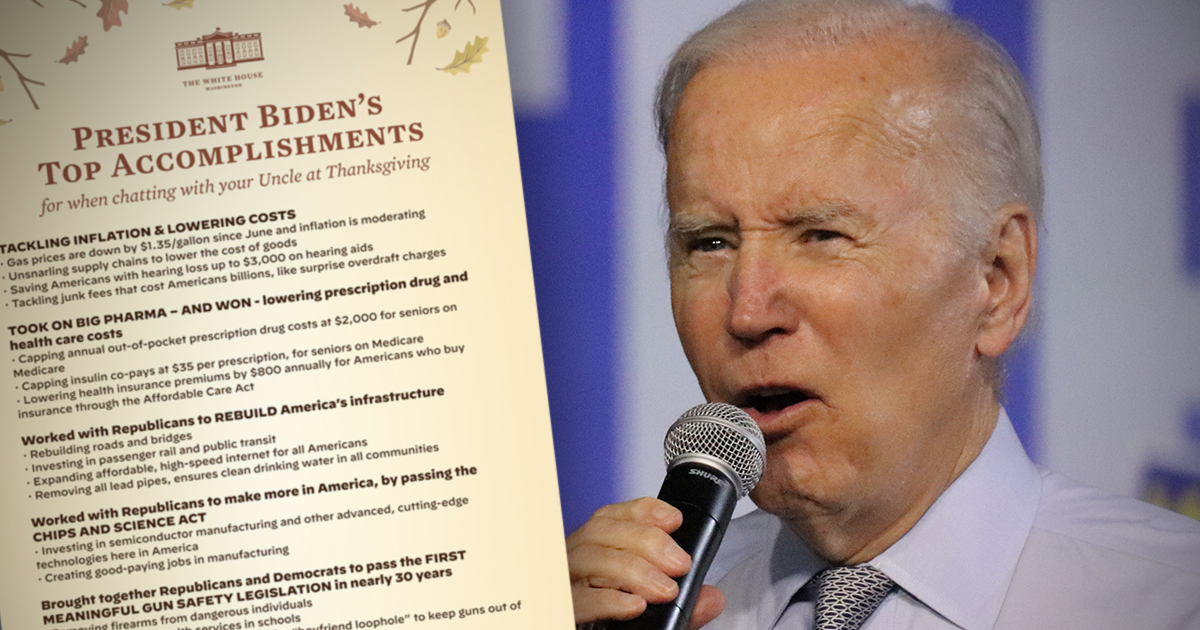 The checklist represents a series of claims – some, outright lies – about Biden and his purported accomplishments.

Among them, the Biden regime expects you to give it credit, in front of your family, for “tackling inflation & lowering costs.” Democrats should inform their conservative family members that Biden has brought gas prices down by $1.35, while failing to acknowledge that it remains up to $2 higher than it was when Biden entered office.

Despite Biden’s undisputed obsession with COVID-19 vaccines, pills, and treatments, Democrats are meant to give Biden credit for taking “on big pharma.” Other achievements include passing the drastically unpopular “infrastructure” bill and other tax-and-spend legislation.

Press Secretary Karine Jean-Pierre described the document as a “cheat sheet” for political conversations with family.

It’s hard to quit talking politics cold turkey — even at Thanksgiving. Talk to your family from across the aisle, and across your dinner table, with this cheat sheet. pic.twitter.com/0KLii3kiGJ

“One last item for your Thanksgiving dinner,” wrote the powerful Democrat operative, “some talking points when ‘that uncle’ comes ‘at you’ about POTUS.”

One last item for your Thanksgiving dinner: some talking points when "that Uncle" comes "at you" about @POTUS. pic.twitter.com/P9X0wDRRZK

Conservatives and those who appose Joe Biden and his administration were quick to point out the hypocrisy, lies, and disinformation presented in the “talking points” distributed by the federal government.

“You left one out,” Marc Thiessen, adding that Biden “raised the cost of Thanksgiving dinner by 20%.”

You left one out:

“Isn’t that nice… The government telling you what to talk about with family over Thanksgiving dinner.” Frei added, “Orwell would be proud.”

Isn’t that nice… The government telling you what to talk about with family over Thanksgiving dinner.

“Democracy is the government handing out sheets of official regime talking points to crush dissent at family gatherings,” he wrote.

Democracy is the government handing out sheets of official regime talking points to crush dissent at family gatherings. https://t.co/nKyaZ5eulS

Despite performing better than some expected in the primaries, Joe Biden and the Democrats remain dramatically unpopular with the majority of Americans.

Though the Democrats previously benefited from single party rule, next year the Republicans will take control of the U.S. House. Compounding the Democrats’ unpopularity, Republicans have already launched sweeping investigations into Biden, accusing the elderly president of “human trafficking” among other high crimes and misdemeanors.

At the same time, Democrats may have a harder time controlling national narratives without opposition due to Elon Musk’s decision to allow dozens or hundreds of banned conservatives to return to Twitter, and due to the loss of key allies at CNN amid the network’s apparent shift to the center.