Rank-and-file FBI agents have “lost confidence” in Director Christopher Wray and expect him to resign, a new report claims.

Following the reported firing of an FBI agent rumored to be an institutional opponent of 45th President Donald Trump, a former FBI agent who now works as an attorney for whistleblowers says the agency’s rank-and-file agents are demanding Wray’s departure.

Attorney Kurt Siuzdak claims agents “feel the director has lost control of the bureau,” according to The Washington Times. “They’re saying, ‘How does this guy survive? He’s leaving. He’s got to leave.”

The reported sentiment of the FBI agents comes following the reported canning of Timothy Thibault, a top FBI agent who whistleblowers accused of bias against Trump.

Thibault claims he retired by his own accord, though The Washington Times reported that two former FBI officials said the former agent was “forced to live his post,” before adding that the publication could not independently verify these claims.

Thibault, who helped lead the investigation into Hunter Biden following receipt of his laptop, used his social media to like and share content from Trump’s political enemies. Many of these tweets came while Trump was in office and actively campaigning against Biden.

He was also responsible for pushing out unvaccinated agents and purging those believed to be Trump supporters. 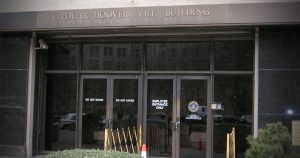 This all comes as America’s faith in the FBI seems to be at an all-time low following the agency’s raid on Trump’s Florida home and resort last month.

Officials claim that discussion of civil war and political violence rose rapidly after news of the raid became public, and Trump urged Joe Biden’s government to act with caution and bring down the nation’s temperature.

“This is massive FRAUD & ELECTION INTERFERENCE at a level never seen before in our Country,” Trump wrote in a statement posted to Truth Social. The former president and likely 2024 Republican front runner demanded, “Declare the rightful winner or, and this would be the minimal solution, declare the 2020 Election irreparably compromised and have a new Election, immediately!”