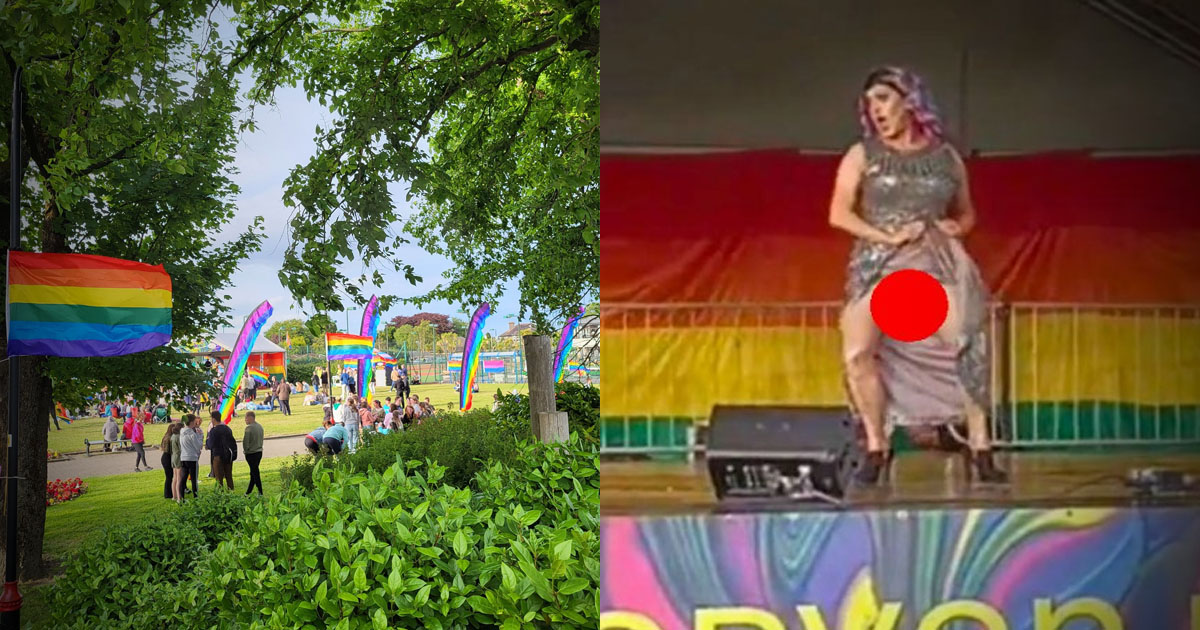 A drag queen exposed their underwear to an audience that included children at an LGBT Pride event in the Irish town of Dungarvan last weekend.

Dungarvan Pride was organised in the Irish town last weekend, with a number of people taking part, including Dreamgirls Drag Queens, who closed out the event. The drag queen group who performed at the festival included FiFi Fondue, Divalicious and Ivanna Fist.

In a video that has now been deleted from social media, Fondue, who closed out the event by performing karaoke on the main stage, pulled up his skirt, exposing his underwear to the audience, which included a number of small children, given that the event had been billed as “family friendly.”

The Liberal.ie noted that the event was held right next to a children’s playground, and included face-painting, and other events that would be fun for children. In fact, children aged around 8-12 performed on the same stage as Fondue earlier in the event.

While on their Instagram page, Dungarvan Pride praised Fondue as being the “queen” of the event and a “wonderful host,” social media users were more concerned about exposing their underwear to an audience of children.

“What would happen if a priest or a teacher did similar in front of a class of young kids – they’d be lynch mobbed and more than likely arrested,” one said, with another adding that “people say that things have gone too far and that those who participate in such depravity need to respect others in society who want no part of it.”

This man exposed himself in front of children yesterday at a Pride event in Dungarvan, Waterford. pic.twitter.com/f3cxrVPTzY

Grown man flashing his genitals to an audience with children. I guess we are heading on the different path in our society. pic.twitter.com/VSPQL3yTDI

The drag queen event was promoted and endorsed by Waterford Council, along with the Irish business group, Chambers Ireland. Abbeyside Catholic Parish also encouraged their flock to attend Dungarvan Pride.

Dungarvan’s first ever LGBTQ+ #Pride Festival takes place today, 4-8pm. Pride bunting is dancing is the breeze all over town for the month of June, while buildings will be lit up in rainbow colours. Supported by @WaterfordCounci @MerrysGastroPub #DungarvanPride @ChambersIreland pic.twitter.com/DoveTBr4Tc

Unfortunately for them, the event is now going viral for all the wrong reasons pic.twitter.com/5WJdBnmmkN

The controversy comes after Waterford County, for which Dungarvan was the county town until 2014, faced anonymous backlash against the LGBT community last year, with Pride flags repeatedly removed and vandalised, anti-paedophile graffitti appearing outside a gay bar, and “straight pride” posters placed up around the town.

Valiant News reported in March that the upcoming Irish census would not require anyone to pick a biological sex if they did not feel comfortable, and would instead assign them on a random basis, in a move designed to help transgender people. The upcoming Dublin Pride Parade is also set to fly a new LGBT flag that also prominently features the flag of Ukraine.