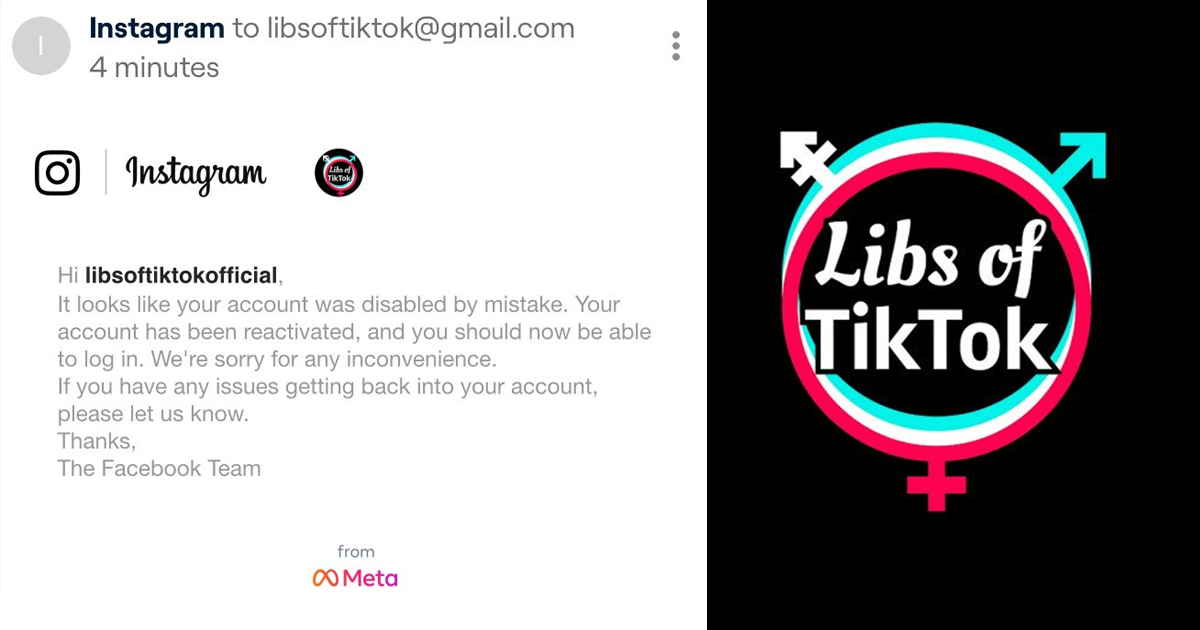 Instagram, the image-based social media platform owned by Mark Zuckerberg’s Meta, banned conservative pundit Libs of TikTok earlier today only to later reinstate her with claims the platform made a “mistake.”

Libs of TikTok, who reposts videos created by far left teachers and activists to her conservative audience with commentary, revealed that she had been banned from Instagram in a tweet this morning.

Now, only a few hours later, Libs of TikTok received an email update from Instagram explaining that the enforcement against the account was a “mistake”. Her account has been reinstated, and the creator thanked those who spoke out against the apparent censorship of a conservative user.

“Thank you to everyone who spoke out against this censorship and demanded we be reinstated,” wrote Libs of TikTok on Twitter.

In the email she received from Zuckerberg’s Meta, Instagram admitted “It looks like your account was disabled by mistake,” and informed her that it had been reactivated after review.

Libs of TikTok clarified that she did not request that review, however, writing “We did not file an appeal yet. This came out of the blue.”

“It’s funny how these mistakes only happen to certain accounts,” she added.

To be clear- we did not file an appeal yet. This came out of the blue. It’s funny how these mistakes only happen to certain accounts…

The Washington Post’s Taylor Lorenz was accused of doxxing Libs of Tiktok earlier this year. Lorenz subsequently complained that people objected to her behavior, and the Post defended its employee.

Many declared that the doxxing had backfired, as Libs of TikTok later appeared on “Tucker Carlson Tonight” and a slew of other high profile conservative news programs, where she revealed that Lorenz approached multiple members of her family over the course of days before ultimately publishing the story.

Lorenz, meanwhile, appeared on CNN with Brian Stelter to claim that her research was merited because Libs of TikTok “could have been a foreign actor.” She was not, but Lorenz and The Washington Post published the story regardless.