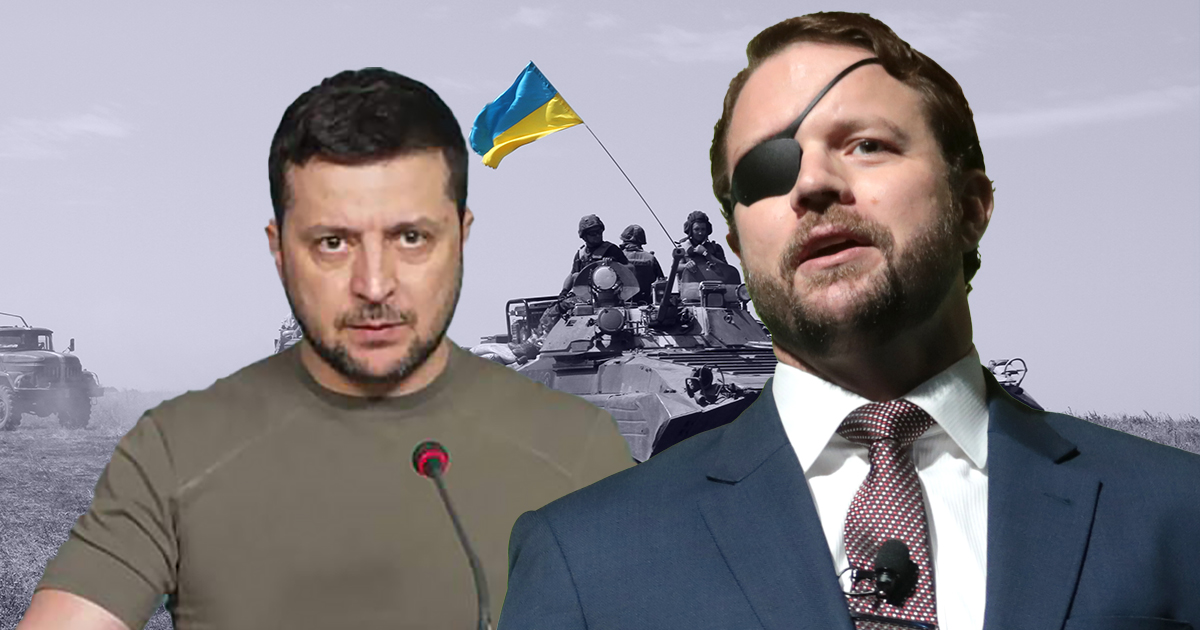 Controversial Rep. Dan Crenshaw (R-TX) and several prominent members of the Republican Party are insisting that escalating the foreign conflict between Russia and Ukraine, with further direct U.S. intervention through providing additional missile and air defense systems, armed drones, and Polish MiG fighters will “stop the bloodshed” in the region that sits nearly 6,000 miles away from America.

During a virtual plea to the United States Congress on Wednesday, former comedian and current Ukrainian President Volodymyr Zelensky forcefully asked the U.S. to declare a no-fly zone over Ukraine, effectively calling for the U.S. to engage and shoot down Russian aircraft.

The former comedian and Ukrainian President also urged the U.S. to provide his country with more support with respects to military aid.

Some lawmakers previously expressed skepticism at the idea of establishing a no-fly zone over Ukraine, as a potential Third World War could begin should Americans forces kill Russian forces in the region.

However, a growing number of Republicans have signaled support for the U.S. to provide Ukraine with various weapons systems and aircraft in order to assist the Ukrainians in their effort to kill Russian forces.

This would be apart from the $14 billion Ukrainian aid package signed by Joe Biden that Congress appropriated in recent days, which already included anti-tank weapons, unmanned drones, small arms and ammunition among other defense equipment.

In an Instagram post published yesterday, Rep. Crenshaw lauded Zelensky’s speech before Congress, adding that the “US could be doing much more” to somehow “stop the bloodshed” by giving the Ukrainians additional military weaponry, which would ultimately be used to shed Russian blood in defense of Zelensky’s government.

“We didn’t provoke any war, he did,” Rep. Crenshaw said of Russian President Vladimir Putin.

The US Congress listening intently to Ukrainian President Zelensky.

His testimony was heart wrenching. He played a video filled with proof of the atrocities being committed by Russia. It wasn’t “propaganda,” it was real life.

The only propaganda is being perpetuated by Russia. pic.twitter.com/Fj0XlOkBCu

Rep. Cresnhaw is viewed by some America First supporters as a pro-war opponent to their agenda over his stated belief that “everyone who has ever screamed, ‘No more endless wars’ as their foreign policy is a friggin’ idiot.”

His stance on the Ukrainian conflict has been parroted by various anti-Trump Republicans, including Sens. Mitt Romney, Mitch McConnell, Lindsey Graham, Susan Collins, and Reps. Kevin McCarthy, Liz Cheney, and former Rep. Adam Kinzinger as the party attempts to “out-hawk” the Democrats.

Stepping out of @ZelenskyyUa's address to Congress, I’m again moved by his monumental leadership and heroic courage. Being a world leader does indeed mean we have a responsibility to be a leader of freedom and peace. We must fulfill his request immediately. Get Ukraine the MiGs. pic.twitter.com/hBEYXGt5ZV

It certainly appears that the Republican Party that had once touted former President Donald Trump’s America First message, has reverted back to it’s traditional pro-war stance when it comes to foreign military intervention.

Even self-proclaimed “America First” Republicans such as Senator Josh Hawley have issued calls for further U.S. escalation of the Ukraine-Russia conflict.

Powerful message this morning from President Zelensky of #Ukraine – said he wished Joe Biden would step up and lead the world. Biden needs to get serious and shut down Russian energy production, open up ours, and arm the Ukrainians with MiGs to defend the skies

In light of the aforementioned events, the prospect of a potential Third World War has increasingly become part of the national discussion in America as the nation faces a plethora of devastating domestic crises, and it appears that members of both political parties do not seem to care one bit.