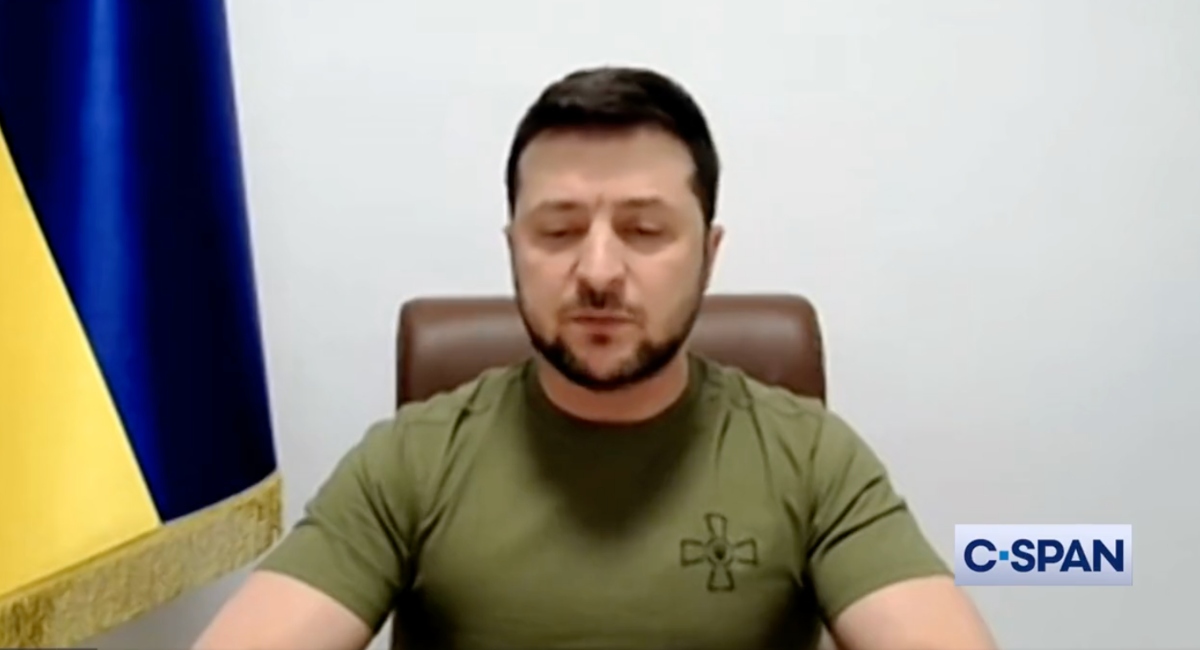 During a virtual plea to the United States Congress on Wednesday, former comedian and current Ukrainian President Volodymyr Zelensky begged the U.S. to declare a no-fly zone over Ukraine, effectively calling for the U.S. to engage and shoot down Russian aircraft.

Some lawmakers have previously expressed skepticism at the idea of establishing a no-fly zone over Ukraine, as a potential Third World War could begin should Americans forces kill Russian forces in the region.

“Russia has turned the Ukrainian sky into a source of death for thousands of people. Russian troops have already fired nearly 1,000 missiles at Ukraine, countless bombs, they use drones to kill us with precision,” Zelensky told Congress.

“This is a terror that Europe has not seen for 80 years, and we are asking for an answer to this terror from the whole world. Is it too much to ask for a no-fly zone over Ukraine to save people?” he asked.

“I see no sense in life if it cannot stop the death,” he said.

The former comedian and actor invoked the American tragedies of Pearl Harbor, the terrorist attacks on September 11, and at one point even the famous “I Have A Dream” speech by Martin Luther King Jr. as he made his case for United States military intervention before the group of American lawmakers.

President Zelenskiy should just surrender or come to some sort of agreement with #Russia. That would ACTUALLY be heroic. Lives would be saved. Instead he wants to initiate World War 3 by having the US set up a no fly zone. #Ukraine #NoFlyZoneOverUkrainepic.twitter.com/RBG2mLLNLp

Zelensky then showed lawmakers a montage of what appears to be Russian attacks on Ukraine.

Zelensky delivers warmongering speech to Congress co-opting “I have a dream” to demand further sanctions, jets & a no fly zone (which means shooting down Russians).

Stating that aggressors must be PREEMPTIVELY destroyed to preserve peace.

We know who will be labeled aggressors. pic.twitter.com/37YoBMcWIx

Many non-Ukrainian citizens of the world have joined Ukraine’s Foreign Legion to engage the Russians in military conflict as the U.S. weighs whether or not they will escalate the situation by getting directly involved.

However, Valiant News reported on Monday that many new recruits have reportedly left the Legion following a Russian airstrike on a military base housing the foreign troops near the Polish border. The Ukrainian government alleged that 35 people were killed and 134 were injured.

Russia had claimed the attack was meant to strike both weapons being funneled to Ukraine, and “foreign mercenaries,” presumably members of the legion. Disputing the death toll put forward by Ukraine, Russia claimed its missile strike killed “up to 180 foreign mercenaries.”

“Left the Legion,” wrote American Reddit user Spindokto after a brief absence from the platform. Spindokto’s previous posts detailed the user’s efforts to get to Ukraine and join the Foreign Legion, and explained that he had experience as a medic serving in the United States Armed Forces.

“It is clear that going to Kyiv with the legion is nearly a f**king death sentence.”

“A medic died the day after he got to the front, another guy tried shooting an AK at an APC and was killed immediately, a 10 man team was nearly wiped out – 8 killed and 2 crawled away.” Spindokto added, “Your body will not be retrieved from the frontlines either.”