Democratic Rep. Jamie Raskin of Maryland claimed over the weekend that House Republicans, particularly the Freedom Caucus, are increasingly considering 45th President Donald Trump for the job of Speaker of the House.

Raskin, a member of the January 6 committee, made the remarks yesterday during an appearance on “Face The Nation” with Margaret Brennan, who responded to Raskin’s claims with incredulity.

“And again, you know, Kevin McCarthy and other leaders within the Republican Party are now required to make a decision about whether they’re going to try to rid themselves of Donald Trump and his toxic influence on the party,” Raskin said, revealing how some Democrats likely perceive the internal struggle between Make America Great Again and establishment Republicans.

Noting that McCarthy may face a fierce leadership challenge from the right, Raskin claimed, “it’s a real problem for Kevin McCarthy now, because there are certain pro-Trumpists within his House caucus, who refuse to accept that he’s really with Trump and they want to get rid of McCarthy.”

Watch an excerpt of the interview on Spreely.video:

“And some of them– they have names very early in the alphabet,” Raskin added, “like Biggs.” Raskin referred to Rep. Andy Biggs of Arizona, who is widely considered to be a possible replacement for McCarthy.

Then, Raskin claimed Republicans are increasingly considering bucking the tradition of giving the Speaker of the House job to an elected politician.

“And they might just vote for Trump, when they you know, take the roll call for speaker so we know that the– the hard right Freedom Caucus people are in search of another candidate and one potential candidate whose name has been floated is Donald Trump himself, because the Speaker of the House does not have to be a member of the House,” said Raskin, “And they are talking about putting Trump right there.”

When Bream expressed incredulity, declaring it’s not a “real option” for Republicans, Raskin replied that “they talk about it repeatedly” and “if Trump decided he wanted to do it, it would pose a profound problem for their party because they refuse to do the right thing.” 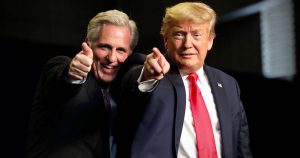 Raskin and Bream then discussed his hopes that Republicans would inexplicably drop their support for the Make America Great Again movement and instead support establishment, anti-Trump figures like “Liz Cheney and Adam Kinzinger.”

While many still consider it unlikely that Trump will be Speaker of the House – the 45th President himself poured cold water on the idea – it is becoming increasingly likely that McCarthy will face a challenge from the pro-Trump right.

“Kevin is FLIGHT over FIGHT when the chips are down,” Gaetz wrote on Twitter after days of attacks on the establishment Republican, “He is not a Speaker for these times.”