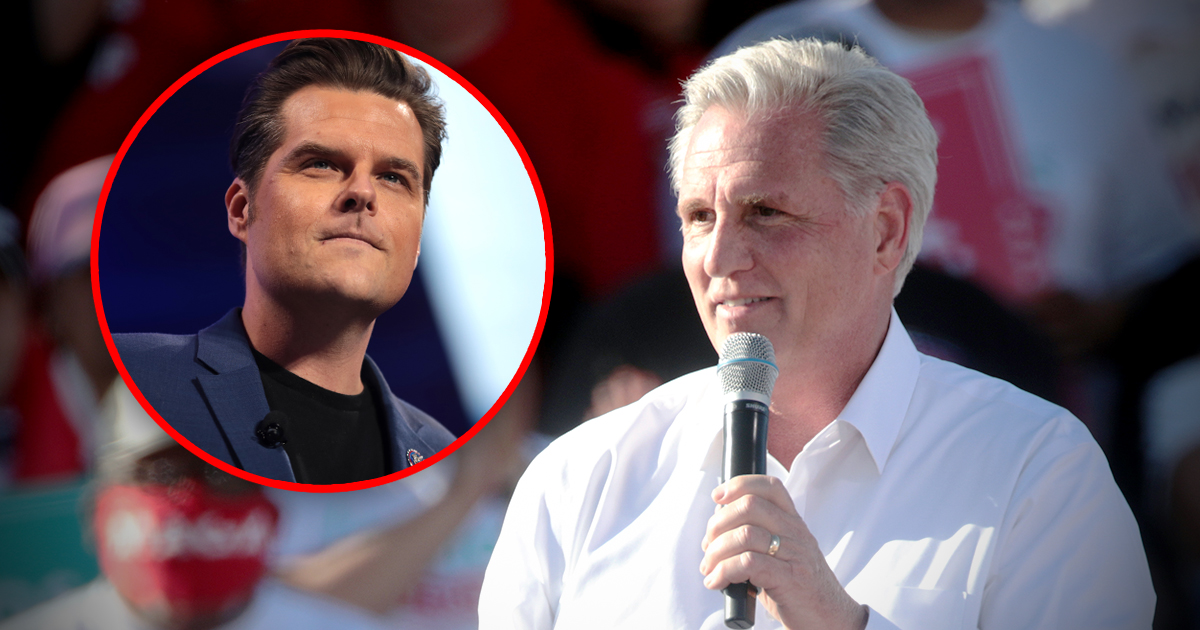 Rep. Matt Gaetz is raising the intensity of his attacks on Rep. Kevin McCarthy, the Republican leader in the House, following the decidedly average results of Tuesday’s elections.

As it becomes more certain that Republicans will recapture the House and be able to oust Democratic Speaker Nancy Pelosi, the party seems headed for a fierce leadership contest.

Gaetz, the popular Republican identified with the Make America Great Again movement and one of the leading figures behind this challenge, expressed support for the Freedom Caucus’s push to delay leadership elections and took McCarthy task on Twitter for the powerful Republican’s actions following January 6.

The Florida politician noted that McCarthy first defended Rep. Liz Cheney during a Republican leadership conference before eventually turning against her, and first told “GOP Leadership Trump should resign after J6” before eventually defending the 45th President.

“Kevin is FLIGHT over FIGHT when the chips are down,” Gaetz wrote, “He is not a Speaker for these times.”

Kevin is FLIGHT over FIGHT when the chips are down

He is not a Speaker for these times

Gaetz’s attacks on McCarthy are already receiving support from key voices in the pro-MAGA sphere.

“Can we trust Kevin McCarthy to do what it takes to get the truth about January 6th?” Dr. Darren Beattie of Revolver News asked, “Can we trust him to help us expose and punish Merrick Garland?”

Florida Rep. Anthony Sabatini agreed with Gaetz, and wrote that “Republicans can do A LOT better than McCarthy!”

Can we trust Kevin McCarthy to do what it takes to get the truth about January 6th?

Can we trust him to help us expose and punish Merrick Garland? https://t.co/UTkV0DeDDH

This comes one day after it was reported that McCarthy currently lacks the votes to become the next Speaker of the House.

After learning McCarthy had already announced a transition team, assuming he would be the next Speaker of the House, Gaetz also discussed the possible leadership challenge on his “Firebrand” podcast, and brought on former Trump cabinet official Russ Vought for the topic.

“I think it’s incredibly disrespectful to his members, to be able to be that presumptuous when he knows he doesn’t have the votes,” said Vought.

“We know he doesn’t have the votes,” he added. “We don’t even know what the majority is.”

“It is incredibly disrespectful to his members to be that presumptuous when he knows he doesn't have the votes to be Speaker of the House.

It should offend members of Congress who have a vote on this."https://t.co/9kxDo7KhFJ pic.twitter.com/5yEasrt7k4

While McCarthy may face a fierce fight in the House, it’s unclear who will be his challenger. Many seem willing to advance Rep. Jim Jordan as the most likely choice, though Gaetz has remained silent.

Today Sen. Josh Hawley branded the 80-year-old Republican as the epitome of “Washington Republicanism” and blamed him for the party’s failure to make significant gains in the November elections.

Specifically, Hawley blamed McConnell for the growing uncertainty surrounding Blake Masters, who challenged Democratic Sen. Mark Kelly in Arizona. McConnell’s Senate PAC pulled millions from the effort to elect Masters ahead of the election, leaving him to fend for himself against the heavily funded Kelly campaign.

The votes are still being counted on the Friday after the election, and it’s still unclear who won, but Kelly is ahead by about 5% at press time.