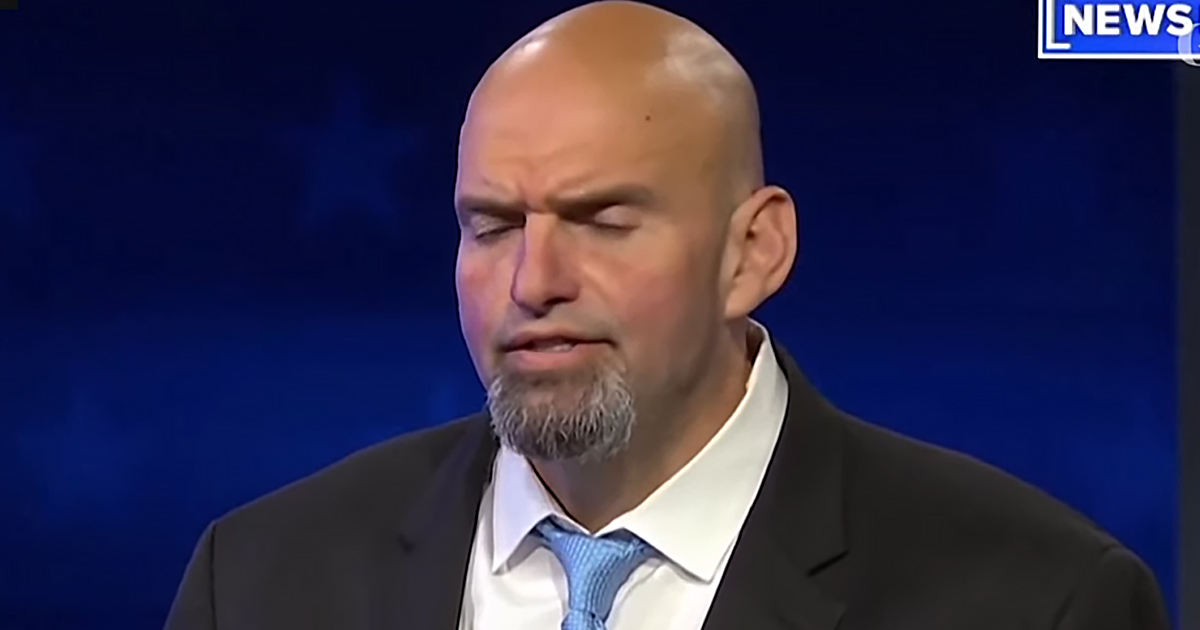 Pundits on both sides of the aisle have been forced to admit, almost universally, that John Fetterman bombed at his debate on Tuesday night.

The overweight 50-something, still unable to process speech after a stroke that robbed him of his primary night victory speech earlier this year, fumbled almost every moment of the speech.

Flubs began within the first seconds of the event, when Fetterman was greeted by the moderator and given the opportunity to speak first, allowing the Democrat to offer his pitch to Pennsylvania voters before his Republican opponent – the admittedly loathsome Dr. Mehmet Oz – could open his mouth.

How did Fetterman exploit this opportunity? He thanked the audience for coming and said good night.

At this point in the debate, supporters of Fetterman must surely have been a bit worried. “Still, it’s only the opening moments, right?” They must have thought, “He’s got his speech-to-text robot, he’ll be fine.” Oh, how wrong they were.

One can only imagine how the same moment must have felt for members of the Fetterman campaign, who surely knew that early moment was to be the highlight of their candidate’s night.

At his best, Fetterman found himself unable to communicate clearly. He fumbled words like “single” and appeared to lose his train of thought mid sentence, even while repeating attacks on Oz that he and his campaign have been using for months.

Take a look at Fetterman’s attempt to call Oz a spoiled rich guy who owns 10 mansions, and question how he could relate to a single mother of two:

FETTERMAN: "How can a man, you know, with with 10 gigantic mansion has am willing to talk about willing wage for anybody? Imagine a signal mom trying with two children trying to raise with them." pic.twitter.com/hbqePfo8Of

“I believe that, I believe that a secure border is, can be compatible with compassion. I believe we need a comprehensive and bipartisan solution for immigration, that’s what I believe. I don’t ever recall on the Statue of Liberty, did they say, ‘Take our tired huddled masses and put them on a bus and use cheap political stunts about them.’ I believe we have to develop a comprehensive and bipartisan solution to address our issue here, immigration here, in our nation.”

As a bonus, this clip shows the ridiculous speech-to-text robot towering over the moderators, revealing exactly how much help the stroke patient received.

This #PASenateDebate is sad as hell to watch. Fetterman clearly hasn’t recovered from his stroke. How is this dude even in the race?? pic.twitter.com/vxF9PPzlh4

The most viral moment of the night, of course, came after Fetterman glaringly lied, falsely claiming he’s always supported fracking despite going on the record as being against the extraction process in 2018.

Both Oz and the moderators attempted to call Fetterman out on this blatant lie, but the stroke patient was unable to respond.

I don’t mean they caught him in a gotcha and left him stammering, looking for a way out. I’m not trying to relay that Fetterman was left flabbergasted after Oz and the moderators unearthed some secret clip revealing his true thoughts on fracking. There was no flourish, no slight of hand, no flick of the wrist or brilliant linguistic maneuver.

No. What I’m telling you is that Fetterman, after hearing the question, simply did not seem to have the mental capacity necessary to respond.

When he blurted out even more support for fracking, no one seemed to know what to do. Everyone in the room, apparently feeling bad for him, just sort of shrugged and moved on to the next subject.

This is why I donated money to @JohnFetterman
This is what we need in the Senate pic.twitter.com/RAsyR4IIFm

The same story played out when Fetterman was asked about his vague promises to fight corporate “price gouging.”

Fetterman heard the moderator quote an excerpt from an article that he allegedly wrote, then agreed with himself proudly, and – I think – attempted to accuse Oz of being a corporate stooge. It didn’t seem to go over well in the room.

It feels politically and medically unethical to have Fetterman run for office right now. If the media can't cover this very serious issue after the debate, they are truly hopeless. pic.twitter.com/9ByAZiipA7

Again, these were the better moments for Fetterman. At his worst, the stroke patient seemed to truly take on the energy of an elderly grandparent recovering from a stroke. Except unlike sweet  grandma, Fetterman believes he is fit for the U.S. Senate.

Another bizarre interjection may represent my favorite moment, however.

At the end of the debate, while Oz delivered his closing remarks, Fetterman seemed to realize – perhaps for the first time – that he royally screwed up and might actually lose the election because of his piss poor performance.

I think Fetterman realized he had to offer some unbelievably memorable flourish at the end of a painful night. Anything to get that horrible taste of pity and cringe out of everyone’s mouth and leave his supporters convinced he’s more than a husk of a man.

Improvising, he seemed to have the perfect plan.

After Oz began speaking, Fetterman shouted with all the gusto he could muster: “YOU WANT TO CUT SOCIAL SECURITY!”

Neither the moderators nor Oz seemed to know what to make of the outburst.

Then there was the GOP-sponsored zinger that has somehow failed to land. Earlier this year, voters learned that Fetterman once chased a black man around with a loaded shotgun, and allegedly held the gun to the man’s chest, all while serving as the Democratic Mayor of his town.

For reasons that may never become clear, this vector of attack has generally failed to stick. Nobody cares that a fat, creepy white guy might have almost killed a black man with a shotgun. Whatever.

When the incident came up in the debate, however, Fetterman may have breathed new life into the issue when he spoke – sort of – on behalf of the black community, and revealed that they forgave him for any misunderstanding related to his shotgun incident.

.@JohnFetterman, why won't you apologize to the innocent Black man YOU chased down with a shotgun?

“I made my entire career dedicated to those kind of pursuits,” he added, because “it’s about serving Pennsylvania not about using Pennsylvania for their own end interests as well.”

This is not funny. It is not something to make fun of. It is genuinely upsetting. And if Fetterman gets elected, it will show the degree to which Democrat voters are prepared to exploit vulnerable humans for political purposes. pic.twitter.com/8UW2YRRuK0

It’s worth reminding our readers that, despite this ridiculous display, Fetterman’s campaign maintains that he is medically healthy and fit to hold public office.

One might think that, if this is true, Fetterman and his campaign would be in a race to release his full medical records to the public. Let us know that he’s going to get better, and in six months he’ll be back to normal. If he’s elected, maybe by January he can deliver a speech on the Senate floor?

Well, sorry. Fetterman is in no rush to offer up his medical records, and despite his general inability to speak, he summoned enough clarity affirm his decision not to share them during the debate.

"Will you pledge tonight to release those [medical] records in the interest of transparency?"

The debate truly represents a remarkable moment in American history. It may be the first debate ever where the winner’s strategy was to speak as little as possible.

Oz, framed by detractors as an unlikable fat cat from New Jersey, an election denying Trump loyalist, an establishment-backed cretin who screwed over Kathy Barnette, or a Turkish national who doesn’t care about America, just had to give his opponent the opportunity to speak without saying anything too offensive himself.

It gives an entirely new meaning to giving someone enough rope to hang themselves.

Give John Fetterman a live camera and a hot mic and he’ll hang his whole political career.