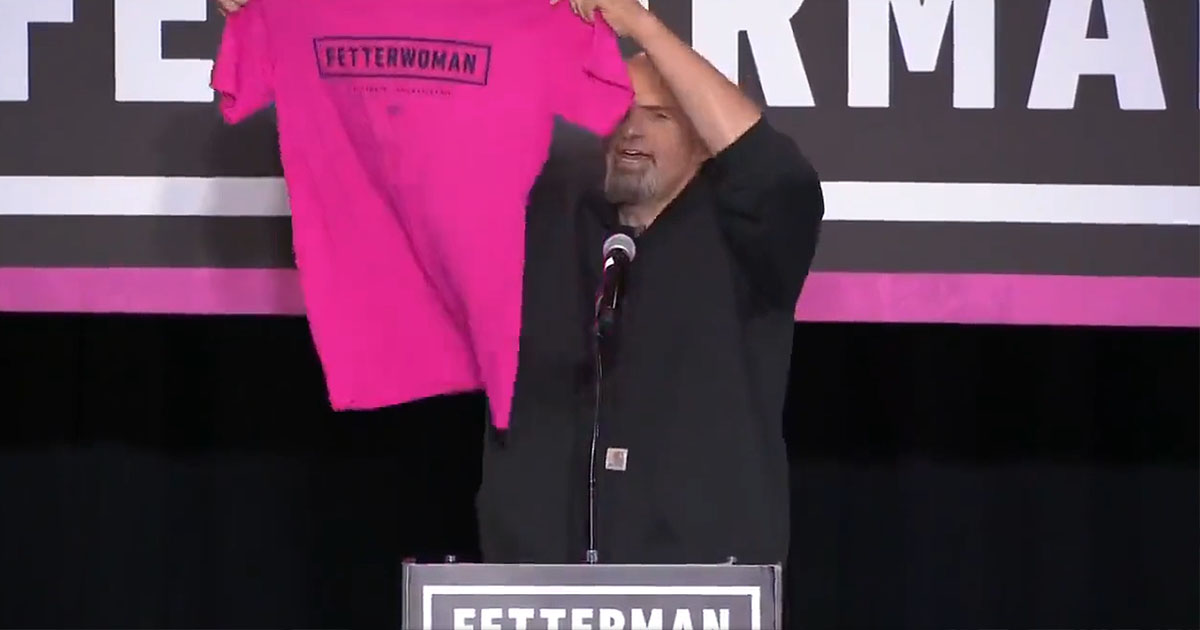 Senate candidate John Fetterman (D-PA) screamed at the audience that his name is now John Fetterwoman during a pro-abortion rally on Monday.

“My name is John Fetterwoman!” the candidate screamed while holding up a pink T-shirt emblazoned with the name “Fetterwoman.”

Fetterman is a recent stroke victim who has campaigned on a platform of releasing one-third of violent criminals from jail as crime rates spike across the country.

Fetterman’s campaign says the candidate’s speech and “auditory processing” abilities are still recovering three months after the stroke, and thus, the candidate will not be appearing in a televised debate with Oz.

Revealing that he would not be participating in the debate against Oz, Fettermain said “As I recover from this stroke and improve my auditory processing and speech,” according to a statement released by his campaign, he continued, “I look forward to continuing to meet with the people of Pennsylvania.”

On the other side of the spectrum, Oz drew headlines over the weekend when he attended to a woman who fainted during his campaign rally in Bucks County, Pennsylvania.

A woman reportedly collapsed in the middle of one of Oz’s events on Saturday, and photos surfaced shortly after showing the doctor tending to the woman. Other reports indicate that Oz stayed with his supporter until emergency medical services could arrive.

One person said they witnessed Oz “hop the barrier” to give the woman aid after seeing her collapse.

“He and State Senate candidates Matt McCullough who is a nurse and State Rep Frank Farry who is a fire chief also aided,” the Pennsylvania resident reported.

Oz later reported that he learned her name, “Rita, ” and that she “is doing well” following the incident.

“Oz rushed in from backstage and stayed with her until the stretcher claimed,” local reporter Will McDuffe wrote on Twitter.