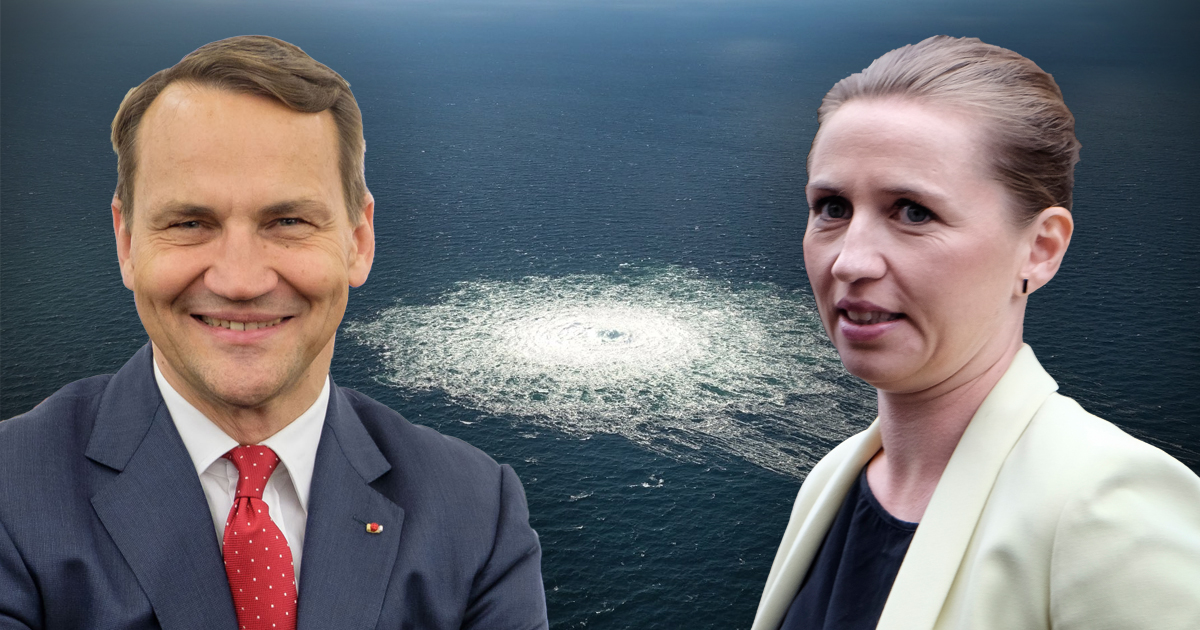 Polish MEP and former defense minister Radek Sidorski has offered a thank-you to the United States after the “deliberate” attack on the Nord Stream pipelines, despite no government or group claiming responsibility for the explosions. Now, American neoconservatives are celebrating.

As Valiant News reported, multiple explosions were recorded on Monday night by a seismologist at Sweden’s Uppsala University, with videos following on Tuesday of both the Nord Stream 1 and 2 pipelines which transport natural gas from Russia to Europe showing leaks in the sea.

Later on Tuesday, Danish Prime Minister Metter Frederiksen told the press that her government viewed the leaks on the Nord Stream pipelines as being caused by “deliberate actions,” but that it was not an attack on Denmark itself, as the explosions occurred in international waters.

Before the confirmation from Denmark that the attacks on the Nord Stream pipelines seemed to be “deliberate,” former defense and foreign affairs minister and now Polish MEP Radek Sikorski tweeted a picture of the leaks, along with the simple tagline of “thank you, USA,” driving speculation that America was responsible.

BTW, there's no shortage of pipeline capacity for taking gas from Russia to Western Europe, including Germany. Nordstream's only logic was for Putin to be able to blackmail or wage war on Eastern Europe with impunity.

Jim Geraghty, the senior political correspondent at the neoconservative publication National Review celebrated the attacks on the pipeline, having previously called for eco-terrorists to attack it in February of this year:

“Three leaks in two days? Wow, that’s a shame! Sounds like the pipeline’s falling apart and just won’t be a reliable way to get natural gas from Russia to Germany. I guess hopes of Germany and Russia eventually putting aside their differences over the invasion of Ukraine and reestablishing long-term German dependence on Russian energy just won’t happen for the foreseeable future. Just terrible luck for Vladimir Putin and the Kremlin, who clearly thought a cold winter with limited energy supplies would make Germany and other European countries come crawling back to the negotiating table. Just about anyone could have cut the pipeline, but whoever it was, they wanted to make sure the Nord Stream pipelines would not be an option for a long time.”

A report from Germany’s Der Spiegel confirmed that the CIA had warned Berlin about possible attacks on the Nord Stream pipelines week previously, citing unnamed sources in the German government.

Speculation was further driven by users sharing a video from February, where Joe Biden said that America would “bring an end” to Nord Stream 2, which has yet to be activated, if Russia invaded Ukraine. When asked how they would do that, given it was under Germany’s control, Biden promised that they would “be able to do that.”

The “deliberate” action against the Nord Stream pipelines follows protests from Germans, who have called for the opening of Nord Stream 2, with energy prices rising.

“When someone turns off a gas tap, turns off the heating, these are not normal conditions and they can’t be. Germany is one of the richest countries in the world and then something like that is just not possible,” said protest organizer Martin Klein on Monday.

Now as citizens come around to what is going on with energy prices, and why on earth they are paying so much out of pocket for a small border dispute thousands of kms away, the US have taken it one step further, and have appeared to have directly sabotaged the pipeline. pic.twitter.com/WSnKX9Li6D

Thousands of Germans are shouting "Nord Stream! Nord Stream!" in Magdeburg to protest against Chancellor Scholz's suicidal sanctions on Russia. Time and time again, sanctions have come back to bite their creators.pic.twitter.com/r8KK5dROlx

Ukraine presidential advisor Mykhaylo Podolyak instead blamed Russia, insinuating that they had attacked their own pipeline.

“Gas leak from NS-1 [Nord Stream 1] is nothing more than a terrorist attack planned by Russia and an act of aggression towards the EU. Russia wants to destabilise the economic situation in Europe and cause pre-winter panic,” Podolyak tweeted. The solution was for Europe, and especially Germany, to increase military support for Ukraine, he argued.