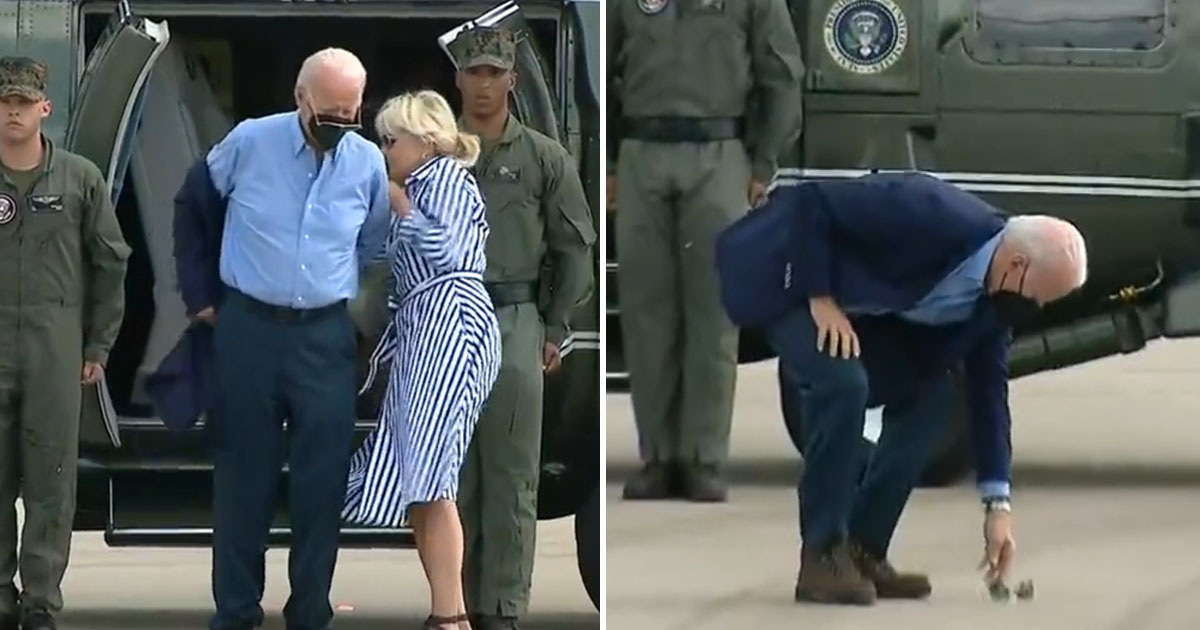 Video footage from CSPAN shows President Joe Biden struggling to put on a jacket by himself, requiring wife Dr. Jill to put on the article of clothing for him before he dropped his trademark mirrored aviator sunglasses on the ground.

The President landed in Kentucky on Monday and had difficulty dressing himself on the tarmac, wearing a mask while his glasses slid down his nose.

Dr. Jill eventually aided Joe with putting on the garment, but after she turned away Biden’s glasses slipped off his masked nose and slammed into the asphalt. He tried to catch them in midair but his reflexes were not fast enough.

Biden made a trademark gaffe while hosting a virtual roundtable on his Inflation Reduction Act last week, stating that he couldn’t drive a vehicle while he’s “vice president.”

“Yeah, I must’ve been – full disclosure, I spoke to the gentlemen about the possibility of my being able to buy one of those Corvettes that are electric vehicles,” Biden said.

“Not gonna be able to do it because I can’t drive a vehicle while I’m vice president, while I’m president,” he added.

Biden expressed the belief in July that people only believe he has led the country into a recession because they “didn’t get a check for eight grand from the government.”

“But I started thinkin’ about it, just as a, you know, somebody whose raised a middle class kid,” Biden stated. “One year, even though you have the job you have now, even though you didn’t get a raise that year. The difference between having a job, having a five percent raise or whatever – three five, seven, whatever it happens to be.”

“In the face of inflation, the price at the pump, although that’s down every day so far, but, you you know, it’s like. Woah,” he continued. “I feel worse off off, but then again, I didn’t get a check for 8 grand from the government.”

“They just, among other things – does that make any sense to anybody or is it just me,” he concluded.