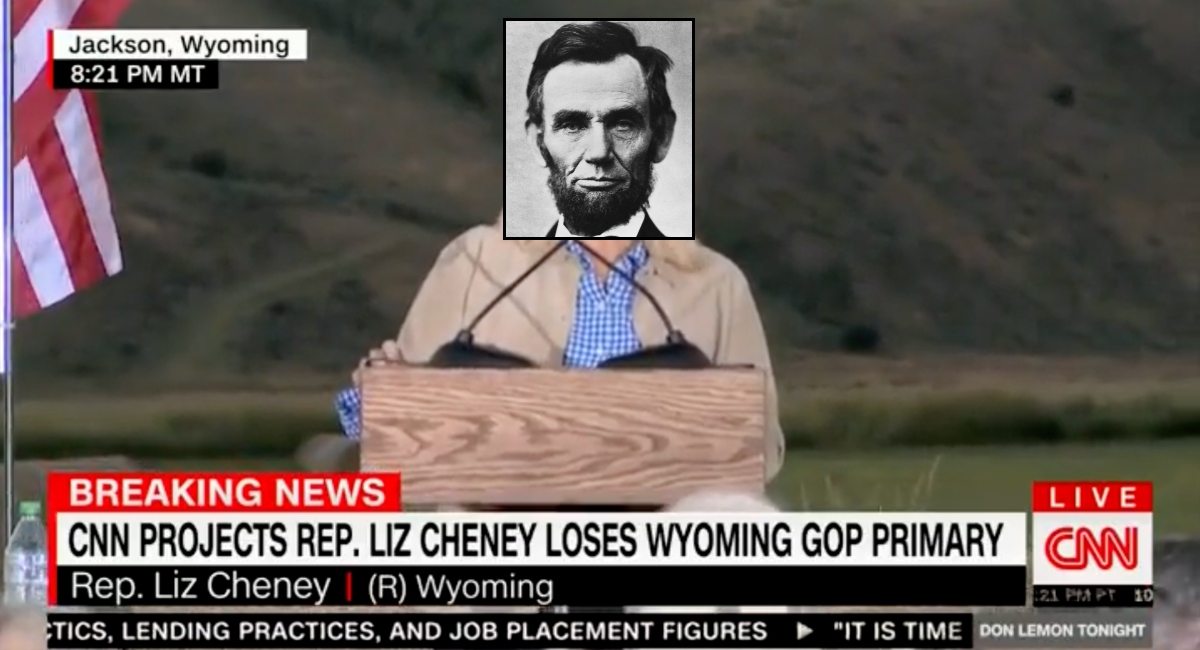 Speaking at a concession speech following her nearly 40 point landslide Republican primary defeat to Trump-endorsed candidate Harriet Hageman, Rep. Liz Cheney compared herself to Abraham Lincoln, who famously had a long string of electoral losses before being chosen as the first Republican nominee for president and winning the White House.

Her remarks specifically touched on the Lincoln’s electoral failures in the U.S. House of Representatives and Senate prior to becoming America’s 16th president, which many take as an indication Cheney will pursue her own political campaign in 2024.

“The great and original champion of our party, Abraham Lincoln, was defeated in elections for the Senate and the House before he won the most important election of all,” Cheney said. “Lincoln ultimately prevailed, he saved our Union, and he defined our obligation as Americans for all of history.”

“Speaking at Gettysburg of the great task before us, Lincoln said, ‘That we here highly resolve that these dead shall not have died in vain – that this nation, under God, shall have a new birth of freedom – and that government of the people, by the people, for the people, shall not perish from the earth’,” said Cheney quoting Lincoln’s famous 1863 Gettysburg Address.

She the compared herself to Lincoln: “As we meet here tonight, that remains our greatest and most important task.”

Cheney also claimed that she could have “easily” avoided the 4th worst congressional primary defeat since the 1960s if she had heard the voices of her voters, and supported election integrity and supporting 45th President Donald Trump. Still, Cheney proudly boasted that she refused to listen to her constituents.

“Two years ago. I won this primary with 73% of the vote. I could easily have done the same again,” Cheney declared. “The path was clear, but it would’ve required that I go along with President Trump’s lie about the 2020 election…That was a path I could not and would not take.”

LIZ CHENEY: "Two years ago. I won this primary with 73% of the vote. I could easily have done the same again. The path was clear, but it would've required that I go along with President Trump's lie about the 2020 election. […] That was a path I could not and would not take." pic.twitter.com/BEHYAloVMv

“This primary election is over, but now the real work begins,” she said during her speech, adding that “I have said since January 6 that I will do whatever it takes to ensure Donald Trump is never again anywhere near the Oval Office — and I mean it.”

A overwhelmingly victorious Hageman credited her resounding win over Cheney on Tuesday to the latter’s “obsession” with former president Trump, Valiant News reported.

In reaction to Cheney’s concession speech, Hageman said “It doesn’t surprise me that she would revert to those same old talking points, because that’s really in large part what got her defeated.”