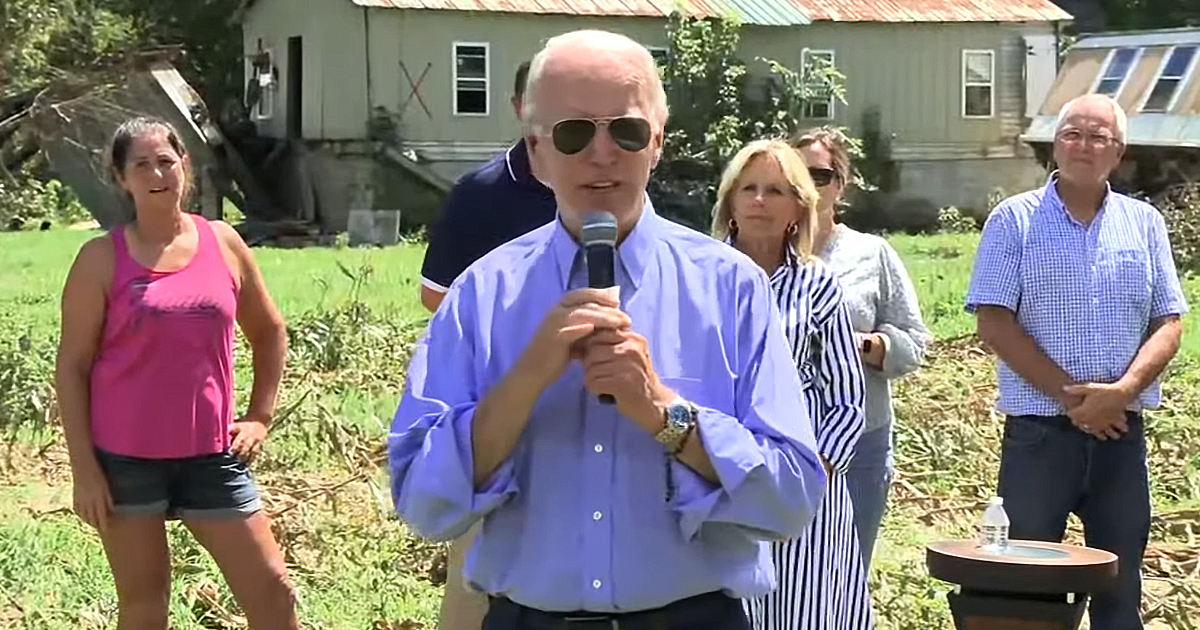 While visiting Kentucky to survey the worst flooding damages seen in the history of the state following a series of heavy storms, Joe Biden strangely appeared to admit that the U.S. government may be able to control the weather sometime in the near future.

“This happened in America, American problem, and we’re all Americans. Everybody has an obligation to help. We have the capacity to do this. It’s not like it’s beyond our control,” Biden said.

“And I promise you, were staying, the federal government, along with the state and county, and the city, were staying until everybody’s back to where they were.” He added, “Not a joke.”

Biden then appeared to brag about the passing of his Inflation Reduction Act to the victims of the devastating storm, adding that the controversial spending bill covers “healthcare” and “God knows what else.”

“Because of a number of things we got done on a bipartisan basis, like a billion, two hundred million dollar infrastructure project, like what we’re doing today, what we passed yesterday, helping taking care of everything from healthcare to God knows what else.”

Biden on the Inflation Corruption Act: "What we're doing today what we passed yesterday helping taking care of everything from healthcare to God knows what else." pic.twitter.com/zkRidUmYfV

“What we’re gonna do is, you’re gonna see, for example, they gotta put a new water line in, in the community,” said Biden.

“There’s no reason why they can’t, at the same time, be digging a line that puts in, a whole new modern line for internet connections. Why? Why can’t we do that?”

While his successor claims that “the weather may be beyond our control for now,” 45th President Donald Trump had reportedly inquired his national security team and administration officials during his first term in office over concerns that China was potentially attacking the United States with secret weather modification technology — specifically in the form of weaponized hurricanes, Valiant News reported.

He wanted to know, specifically, “Does China have the secret technology — a weapon, even — to create large, man-made hurricanes and then launch them at the United States?”

President Trump’s ideas could have also stemmed from the U.S. Air Force’s Project Popeye during the Cold War, a project that “aimed to use cloud seeding — dropping salts and dry ice into clouds in order to induce rain and snowfall — to try and defeat the insurgency in South Vietnam.”

“The idea behind it was that we could we slow down weapons and materials getting from North to South Vietnam via the Ho Chi Minh trail by creating a monsoon season year round so that trail would be unpassable,” explained Vince Houghton, a historian and author of Nuking the Moon.

According to the Chinese government, China’s “weather modification should arrive at a worldwide advanced level in terms of operation, technologies, and services” for the purpose of  “agricultural production and disaster mitigation” by the year 2035.