As she herself noted that it had been an embarrassing two months since leaving the role, I joined the score of critics who mocked her on Twitter. 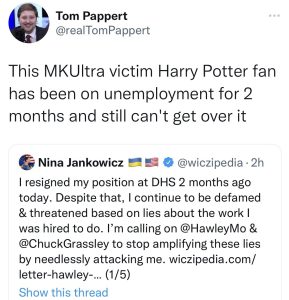 Soon after, I was shocked to learn that I had been blocked on Twitter by the Harry Potter Rocking queen of disinformation.

Had I really struck such a nerve to compel one of the – formerly – most powerful women in the United States government to block me on Twitter? Had the woman once given the sole power to determine fact versus fiction singled me out for punishment? Need I prepare a will? 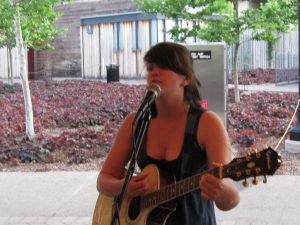 While I contemplated whether I should be using my VPN and briefly considered changing my name and moving to the Philippines, the truth of the matter turned out to be rather mundane: A colleague messaged me on Twitter to inform me that the Exiled Wizard of Disinformation simply uses a bot to automatically block her critics.

“How do we know she uses a bot, though?” I asked my colleague. Apparently, Nina bragged about using the bot to automatically block those who question her authority only a few days ago.

In fact, Nina bemoaned that evil “investigative journalists” seem keen to point out that she blocks a lot of people.

To “investigative journalists” like @kitklarenberg and others conspiracizing about how I block people: there’s an app for that (@blockpartyapp_). I’ve actually tweeted about it before if you cared to, you know, investigate. https://t.co/iY9e8gyDJs pic.twitter.com/AL1Wt8DFzm

She later claimed in the same thread that her auto-blocking of critics does not include friendly “criticism and civil disagreement” and declared that only those who launch “personal attacks, conspiracies about me, harassment, and encouraging others to harass me” would be blocked.

Bringing me back to reality – in my imagination I had already fled to a remote village in Costa Rica and started using my high school Spanish name, Tadeo Miguel – Nina also declared that I was “not special” just because she blocked me.

Everyone has the freedom to use this platform as they see fit. If you use it to attempt to harass people out of public discourse or support those who do, I’m going to use the tools the platform gives me to make sure I don’t have to interact with you. 😘

Fortunately for Nina, she left her government job and is once again a private citizen who is legally allowed to block her critics without fear of legal repercussions.

The same, ironically, may not be true if she had stayed on the Disinformation Governance Board.

In 2019, the courts famously ruled that 45th President Donald Trump did not have the First Amendment right to block his critics on Twitter, and forced Trump to retroactively unblock those who had been prevented from viewing the presidential tweets after he entered the White House.

The court argued that “Public officials’ social media accounts are now among the most significant forums for discussion of government policy,” though perhaps even more ironically, courts have been unwilling to force the platform to reverse its ban on Trump’s account.

Spread the love
In this article:Commentary, Disinformation Governance Board, Featured, Nina Jankowicz, Twitter