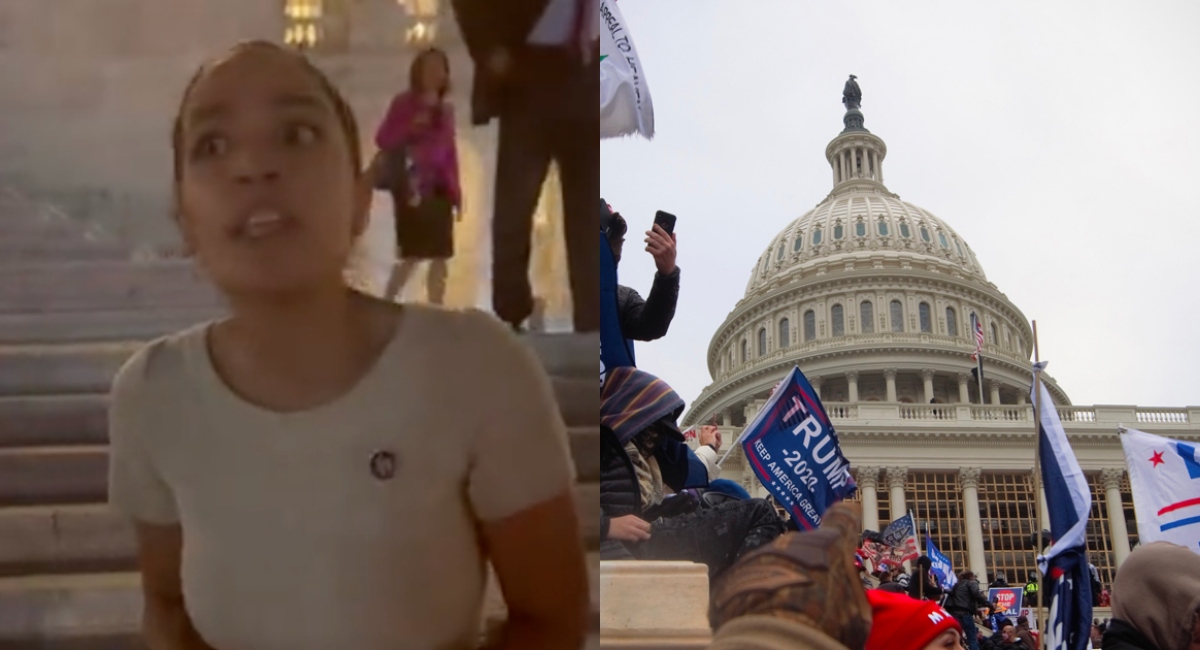 Congresswoman Alexandria Ocasio Cortez (D-NY) on Thursday night suggested that law enforcement officers and “people on the inside” of the United States government assisted angry election integrity protestors in their effort to enter the Capitol building on January 6, adding that “footage and evidence” of such activity was suppressed, which she suggested amounts to a political cover up.

In a rant that was captured by reporter Pablo Martinez and subsequently posted to Twitter, AOC stated her grievances with the idea that “there were actual officers” working with the frustrated crowd that day.

“I have no idea what happened to the people on the inside, who were very clearly sympathetic with what was going on, and opening the doors wide open for that. And I’m supposed to sit here and pretend like none of that ever happened?” she said.

.@aoc tells me she's never felt safe in the Capitol, citing reports of police and members of Congress working with insurrectionists on January 6th. Here's the video: pic.twitter.com/9rxABsUI3L

“Remember how there was tons of footage and evidence of officers & others inside on 1/6 supporting insurrectionists, but then everyone decided it was too politically risky to investigate thoroughly so they brushed under the rug and now we still have no idea who or what is safe?” the Congresswoman tweeted Thursday night.

Perhaps ironically, many Republicans believe that the violence on January 6 was animated through the assistance of law enforcement as well. Concerns among some conservatives, similarly the opinions expressed by AOC, revolve around the phenomena which involved Capitol Police officers opening the doors for election integrity protestors to enter the Capitol building.

Additionally, Republicans are particularly interested with individuals such as suspected federal operative Ray Epps, who through a series of bombshell reports by Revolver News appeared to work alongside what seems to be a web of unindicted suspected federal “operators” that were captured on video appearing to animate, incite, and participate in violence on and even the day before January 6.

To get acquainted with Epps, watch the video compilation: again, this is the ONE Jan 6 rioter the New York Times has managed to write a puff piece for pic.twitter.com/TYCLI2KDhA

Establishment politicians such as Rep. Adam Kinzinger (R-IL) and outlets like the New York Times insist that Ray Epps was not associated with the United States government during the January 6 riot, nor were the January 6 protestors led astray by operatives working on behalf of the “Deep State.”

“I don’t want there to be any shred of doubt that the FBI and Ray Epps somehow organized January 6 and an insurrection, or it was the Deep State, or it was anything but what it was, which was a Trump-inspired insurrection,” Kinzinger said in April.

However, AOC appears to be in agreement with people like 45th President Donald Trump on the issue of potentially suppressed January 6 security footage.

During a June speech at the Faith and Freedom Coalition in Nashville, Tennessee, President Trump called upon Democrat House Speaker Nancy Pelosi to release the over 14,000 hours of surveillance and security footage of the Capitol building on January 6 — which he claimed she’s been hiding from the public.

“If the unselects really cared about the truth,” Trump said, using his characteristic nickname for the House select committee, “they would immediately release all the video of the Capitol surveillance cameras that Pelosi has been hiding for nearly two years.”

Members of Congress such as Reps. Paul Gosar (R-AZ), Marjorie Taylor Greene (R-GA), Matt Gaetz (R-FL), and Louie Gohmert (R-TX) have repeatedly asked the federal government about the roughly 14,000 hours worth of Capitol security footage that has not been released. Some have said that video may contain evidence that would exonerate many of the January 6 detainees, some of which have been detained in a Washington, D.C. jail without a trial for 18 months.

“If the committee cared about the truth, they would reveal everything the U.S. government knows about the individuals who have not been arrested despite being caught on video urging the crowd to press forward — including people like Ray Epps,” Trump said.

Spread the love
In this article:Alexandria Ocasio-Cortez, Commentary, Featured, January 6