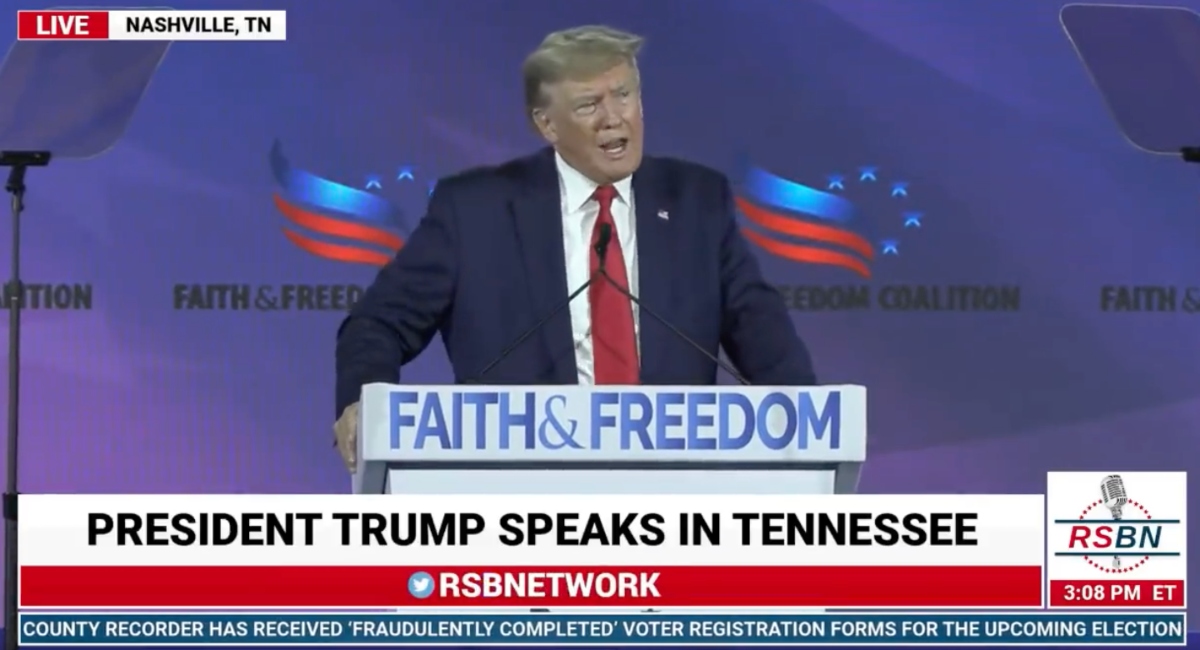 During a speech at the Faith and Freedom Coalition today in Nashville, Tennessee, 45th President Donald Trump slammed the Biden administration and Congressional members January 6 Commission over a number of topics relating to what occurred at the U.S. Capitol building on January 6.

“If the unselects really cared about the truth,” Trump said, using his characteristic nickname for the House select committee, “they would immediately release all the video of the Capitol surveillance cameras that Pelosi has been hiding for nearly two years.”

Members of Congress such as Reps. Paul Gosar (R-AZ), Marjorie Taylor Greene (R-GA), Matt Gaetz (R-FL), and Louie Gohmert (R-TX) have repeatedly asked the federal government about the roughly 14,000 hours worth of Capitol security footage that has not been released. Some have said that video may contain evidence that would exonerate many of the January 6 detainees, some of which have been detained in a Washington, D.C. jail without a trial for 18 months.

During his speech, the former president reminded his audience about the elusive January 6 “pipe bomber,” who was caught on video allegedly planting a pipe bomb at the Capitol building ahead of the riot. The federal government has still failed to identify the individual in the video despite the bombs requiring a large police response ahead of the protests.

“They would investigate why the Biden administration has supposedly not been able to identify the attempted bomber. Remember the pipe bomber? They have this picture. They have everything,” Trump said, noting that the January 6 committee and much of the media has ignored the mysterious would-be bomber.

“They know what he looks like and they never found him, something which the committee and the media mysteriously,” said Trump. “They don’t mention the pipe bomber anymore.”

Trump then speculated that the alleged bomber was not affiliated with the election integrity protest and suggested that the unidentified individual came from a “different group.”

“This guy had a pipe bomb, but he wasn’t from that group that was listening to that speech. He was from a different group and they don’t want to talk about him.”

Trump then urged the committee to divulge “everything the U.S. government knows” about potential undercover federal actors “like Ray Epps,” appearing to reference a series of bombshell reports by Revolver News that seemingly unveiled a web of unindicted suspected federal “operators” that appeared to animate, incite, and participate in violence on January 6, according to video that was released in the reports.

“If the committee cared about the truth, they would reveal everything the U.S. government knows about the individuals who have not been arrested despite being caught on video urging the crowd to press forward — including people like Ray Epps,” Trump said.

“They would tell us why Nancy Pelosi rejected 10,000 National Guard troops that I recommended be there, because I heard it was going to be a big crowd,” he continued. “They turned it down, they didn’t want it.”

“If you had 200 National Guardsmen or military, January 6 wouldn’t have been January 6 as we know it,” adding that Pelosi and Washington D.C. Mayor Muriel Bowser are responsible for Capitol security.

“Mike was afraid of whatever he was afraid of,” Trump said at the Faith and Freedom Coalition. “But as you heard a year and a half ago, Mike Pence had ‘absolutely no choice’ but to be a human conveyor belt.”

“He was a human conveyor belt,” Trump continued. “Even if the votes were fraudulent, they said he had to send the votes, couldn’t do anything. I said, ‘Well, what happens when you had more votes than you had voters.’”