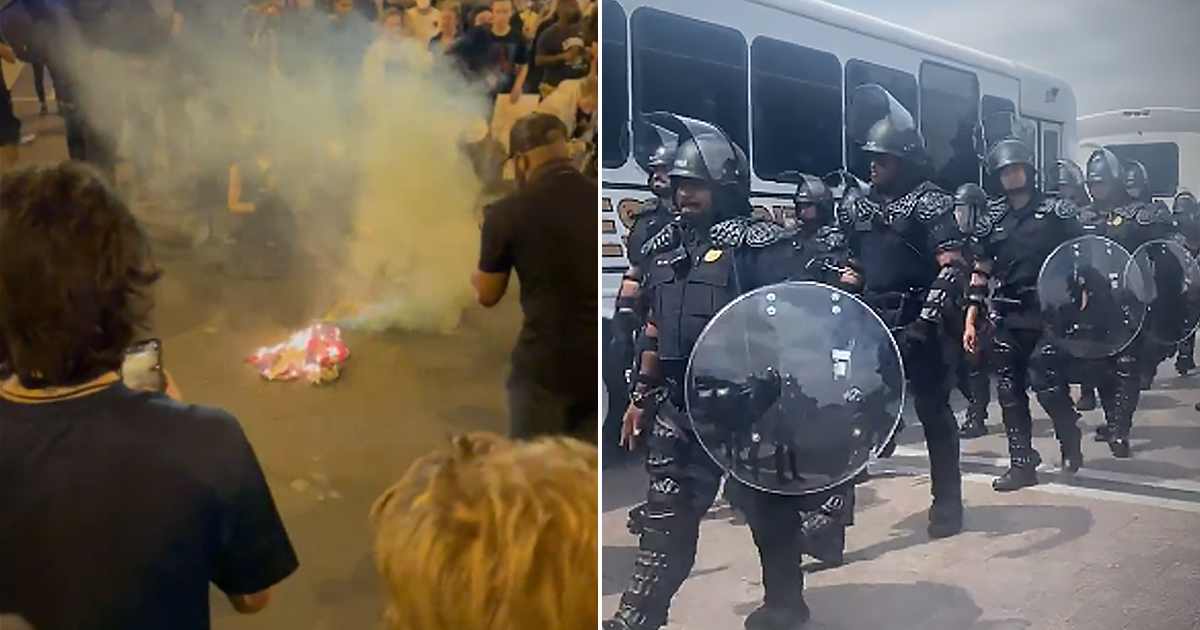 At least two dozen protesters were arrested across the United States last night after news broke that Roe v. Wade had been overturned by a conservative majority in the Supreme Court in a 5-4 decision.

Protests broke out in most of the nation’s major cities. New York, Los Angeles, Seattle, and Washington, D.C. are among major cities that saw large protests, while smaller locales like Cedar Rapids saw unexpected violence break out.

Current reporting from the New York Post puts the total number of arrests at 25 in that city alone, and crimes committed range from vandalism – broken windows on buildings and spray painted graffiti – to breaking and entering into Republican establishments and dousing them with unknown liquids.

#Breaking#Protest supporters storm the gates of #FoxNews and tear the place up over @TuckerCarlson. He only made it out because he was impersonating a journalist. #RoeVsWade #SupremeCourt pic.twitter.com/eszGAhTDmk

Protesters stopped outside the Fox News headquarters, then broke the window at the Women’s National Republican Club and poured “an unknown liquid” on the floor once inside.

The Post reports at least a dozen were detained by police after the crowd of abortion fanatics reached Bryant Park.

JUST IN: A large number of people were arrested for disorderly conduct during a pro-choice protest in New York City's Bryant Park. pic.twitter.com/TgKtdHAwkc

On the opposite coast in Los Angeles, protesters blocked a highway from traffic and were seen on video attempting to stop traffic by force if it did not obey the mob’s demand to stop voluntarily.

The Los Angeles Times reports that “No arrests were made after the freeway was cleared,” quoting local police.

Police ultimately declared an unlawful assembly at around 9 p.m. and the crowd dispersed by 11 p.m., but said that “smaller group of individuals took to the streets with the intention of creation chaos and destruction.”

It’s not clear how many arrests were made in Los Angeles.

Left-wing activist @Tinadesireeberg clashed with police in Los Angeles at the violent pro-abortion protest & was pushed to the ground. pic.twitter.com/B7lbssxU2H

In nearby Seattle local media reported that “thousands” of pro-abortion protesters descended into the city’s streets, and while the demonstrations largely remained peaceful, there were isolated pockets of violence that resulted in at least two arrests.

One moment captured on video appears to show a group of Antifa members physically assaulting and restraining a street preacher who attempted to enter the scene of the protest.

ANOTHER ANGLE: Seattle street preacher hanging on to construction sign, being carried out by Antifa thugs, then dropped to ground. As he tried to read from the Bible, they prevented him from entering area abortion rights rally was happening. #RoeVsWade #RoeVWade #SeattleProtests pic.twitter.com/Srgd33XHSC

Valiant News reporter Andrew White was on the ground in Washington, D.C. in the late afternoon, and captured video of protesters chanting “America was never great” as they followed the lead of an elderly woman.

Later, a smaller group of protesters and hurling vulgar insults toward a Christian street preacher.

Pro-abortion protester shouts "I want sex, I want to come, I want to orgasm!" pic.twitter.com/YIcJgssqPk

Later, a protester began shaking while confronting a pro life demonstrator who urged that it was “time for logic, not emotion” while dressed in reggae attire and standing in front of a keyboard.

“Are you prejudiced against me? You’re assuming I’m a white, prejudiced, a white supremacist,” the pro-life demonstrator said, confronting pro-abortion protester. “You don’t even know me.”

“I have adrenaline in my body” pic.twitter.com/F1MfmQ0JAy

While protesters were caught on video handing out the home address of Justice Clarence Thomas, and police assembled in large numbers to protect churches and government buildings, The Washington Post reports that no arrests were made by the end of Friday night.

Large numbers of riot police are being mobilized in Washington, DC in response to and anticipation of mass violence by the left over Roe v Wade. pic.twitter.com/kmMOyPdqq9

The crowd eventually overwhelmed police in some areas of the city, but police generally did not engage with the protesters.

#Antifa & far-left protesters force their way through a police line in Washington DC at a pro-abortion protest over #RoeVWade. Video by @Julio_Rosas11: pic.twitter.com/WhcB7d98oD

Protestors just burned an American flag in the middle of the streets in Washington DC in protest of the #RoeVsWade decision @TPUSA pic.twitter.com/ROwh4dqVH3

Apparently a male demonstrator wearing a “Don’t treat on my uterus” shirt stopped traffic for at least half a day after climbing “to the top of the 70-foot archway over the Frederick Douglass Memorial Bridge” and refusing to come down. He was still on the bridge by 10 p.m.

Video from Cedar Rapids, Iowa shows a mob of protesters swarming a truck in what some claim was an unprovoked attack against the motor vehicle.

A woman who claims to have been involved in the incident says the truck drove into the crowd and ran over her foot.

“The truck got impatient for whatever reason and charged into the crowd,” said the woman. “There was at least three people, I look over, I see people trying to push the truck back.”

“I just instantly got mad and came over, tried to stop the truck, tried to stop him. He grabbed, ripped my sign, and pushed me down, drove off, and that was it.”

Here's the woman who said the truck ran over her foot at protests today in Cedar Rapids. She says the driver "charged into the crowd" and she went over to try and stop the truck.

Yesterday the Supreme Court overturned Roe v. Wade in a landmark 5-4 decision backed by the court’s conservative majority. Some have reported the decision as 6-3, as Chief Justice John Roberts offered concurring opinion that would have stopped short of overturning the precedent set by Roe, but agreed with the majority’s premises.

Experts say the decision could open the door to reexamining other controversial court cases, which as Valiant News reported include “Griswold v. Connecticut, the right for married people to obtain contraceptives, Lawrence v. Texas, which protects homosexual relationships, and Obergefell v. Hodges, which legalized gay marriage across the country.”

Tom Pappert is the Editor-in-Chief of Valiant News. He has worked in political news and commentary since 2015, when he began supporting Trump on a left wing college campus. You can follow him on Twitter @realTomPappert, on Gab @realGodEmperorTrump, on Facebook at Tom Pappert, or see his other social media by visiting tompappert.com. Tips can be sent securely to [email protected]il.com.