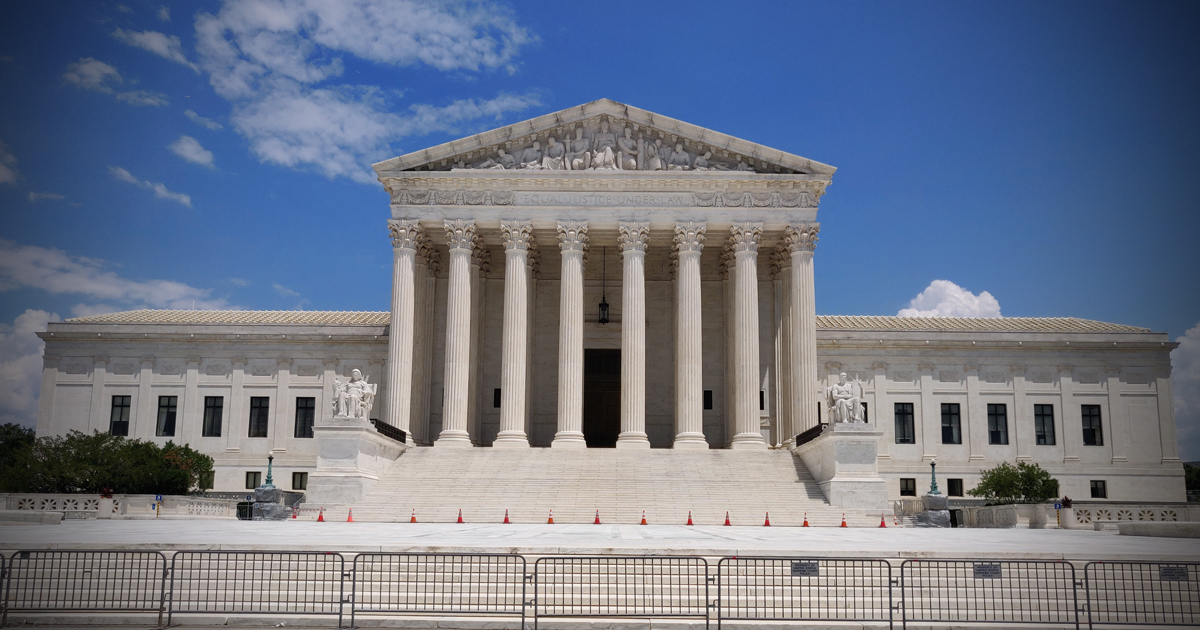 The Supreme Court has overturned Roe v. Wade in a 5-4 ruling, paving the way for abortion bans across the country.

“We hold that Roe and Casey must be overruled,” Alito wrote in the majority opinion. “The Constitution makes no reference to abortion, and no such right is implicitly protected by any constitutional provision, including the one on which the defenders of Roe and Casey now chiefly rely—the Due Process Clause of the Fourteenth Amendment.”

In section VI, part A, Alito confirmed that “the States may regulate abortion for legitimate reasons, and when such regulations are challenged  under the Constitution, courts cannot ‘substitute their social and economic beliefs for the judgment of legislative bodies.'”

“Abortion presents a profound moral question,” Alito concluded. “The Constitution does not prohibit the citizens of each State from regulating or prohibiting abortion. Roe and Casey arrogated that authority.”

In his concurring opinion, Justice Thomas argued that the Due Process Clause, which Roe is based upon, does not “forbid the government to infringe certain ‘fundamental’ liberty interests,” and as such, the Court should, in future, reconsider other major rulings based on the same logic.

These include Griswold v. Connecticut, the right for married people to obtain contraceptives, Lawrence v. Texas, which protects homosexual relationships, and Obergefell v. Hodges, which legalised gay marriage across the country.

Related  Nikki Haley Hints She'll Challenge Trump in 2024: 'I Think I Can Be That Leader'

Justice Kavanaugh, in his concurring opinion, specifically argued that because the Constitution “is neutral on the issue of abortion, this Court almost must be scrupulously neutral”:

“The nine unelected Members of this Court do not possess the constitutional authority to override the democratic process and to decree either a pro-life or a pro-choice abortion policy for all 330 million people in the United States… The Court’s decision today properly returns the Court to a position of neutrality and restores the people’s authority to address the issue of abortion through the processes of democratic self-government established by the Constitution.”

Dissenting, Justices Breyer, Sotomayor, and Kagan, argued that the court has discarded a “balance” that was created by Roe in regards to abortion, and that a woman now “has no rights to speak of” from the moment of fertilization. “Across a vast array of circumstances, a State will be able to impose its moral choice on a woman and coerce her to give birth to a child,” they wrote.

“Whatever the exact scope of the coming laws, one result of today’s decision is certain: the curtailment of women’s rights, and of their status as free and equal citizens,” they continued, noting that the only reason that Roe was overturned is because “the composition of this Court has changed,” thanks to appointees from President Donald Trump.

The decision had been prepared for well over a month, with a draft opinion of the decision being leaked to Politico in May.

“Roe was egregiously wrong from the start,” Justice Alito wrote in the original leaked draft opinion that Politico described as a “full-throated, unflinching repudiation of the 1973 decision which guaranteed federal constitutional protections of abortion rights and a subsequent 1992 decision – Planned Parenthood v. Casey – that largely maintained the right.”

Following the leak of the draft, the Supreme Court ordered an investigation to find out who was behind it, ordering clerks to hand over cell phone records to the court, and sign an affidavit when doing so.

The leak thrust the abortion debate back into the public discourse, which included serious threats and actions from radical pro-abortion activists. Multiple pro-life pregnancy centres and groups were vandalised, or faced arson attacks, across the country, from violent groups.

An assassin even attempted to kill Justice Kavanaugh, something the Department of Homeland Security had warned about in a memo reported by Axios.

Abortion may now become illegal in around 26 states in the union, with 13 states having “trigger laws” on the books, ready to ban abortion as soon as Roe v. Wade was repealed. These 13 states are: Arkansas, Idaho, Kentucky, Louisiana, Mississippi, Missouri, North Dakota, Oklahoma, South Dakota, Tennessee, Texas, Utah and Wyoming.