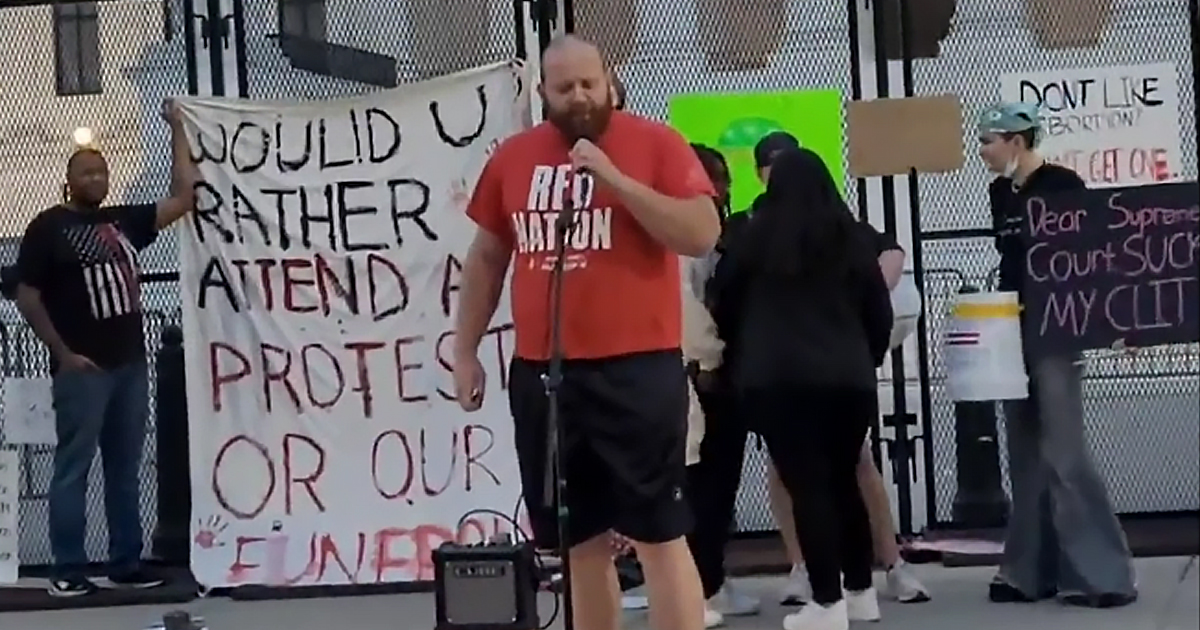 Pro-abortion protesters outside the Supreme Court were apparently trolled by a biological male who told the crowd he was a female-to-male transgender, and was disappointed that the Supreme Court was preventing men from aborting their pregnancies.

YouTuber Alex Rosen posted the video to Twitter, showing him with a small number of protesters outside the recently constructed security barriers erected to protect the Supreme Court.

For over a minute, Rosen had the crowd on his side while describing himself as a female-to-male transgender who was upset that men could no longer have abortions.

“I am a transgender female-to-male and I too can get pregnant,” shouted Rosen after introducing himself as Gardenia. “Roe v Wade did not only take away women’s rights to abortion, it took away men’s rights too.”

“The only Roe that should be revoked is death row for innocent minorities in prison due to these white males!”

MINDLESS #RoeVWade protesters get TROLLED AND HAVE THEIR RALLY CRASHED IN #WashingtonDC
Full video on the YouTube channel puggy pug pic.twitter.com/GrspOkitDY

Rosen seemed to draw confusion when he then pivoted to his fictional story of oppression.

“I wanted to appear pregnant. Next thing you know Roe v. Wade has ended, and now I can’t get an abortion!” He continued, with the crowd no longer on his side, “It seems like the only thing terminated is my hopes and dreams.”

Before he could explain what he would do if he “were a Make a Wish kid,” Rosen was finally interrupted by a masked woman who asked him to return the microphone.

At this point the protest organizers quickly return to a pro-abortion chant.

On Monday, a leaked Supreme Court draft opinion revealed that a majority of judges had voted to overturn Roe v. Wade, the landmark 1973 abortion law, after Politico published the document.

Many conservatives have noted that Democrat messaging around abortion has conspicuously focused on “women” and their reproductive health, despite the Biden administration’s own messaging that referred to “birthing people” rather than gender, because according to gender theorists, women who are transgender and decide to live as men and be called men can also get pregnant.