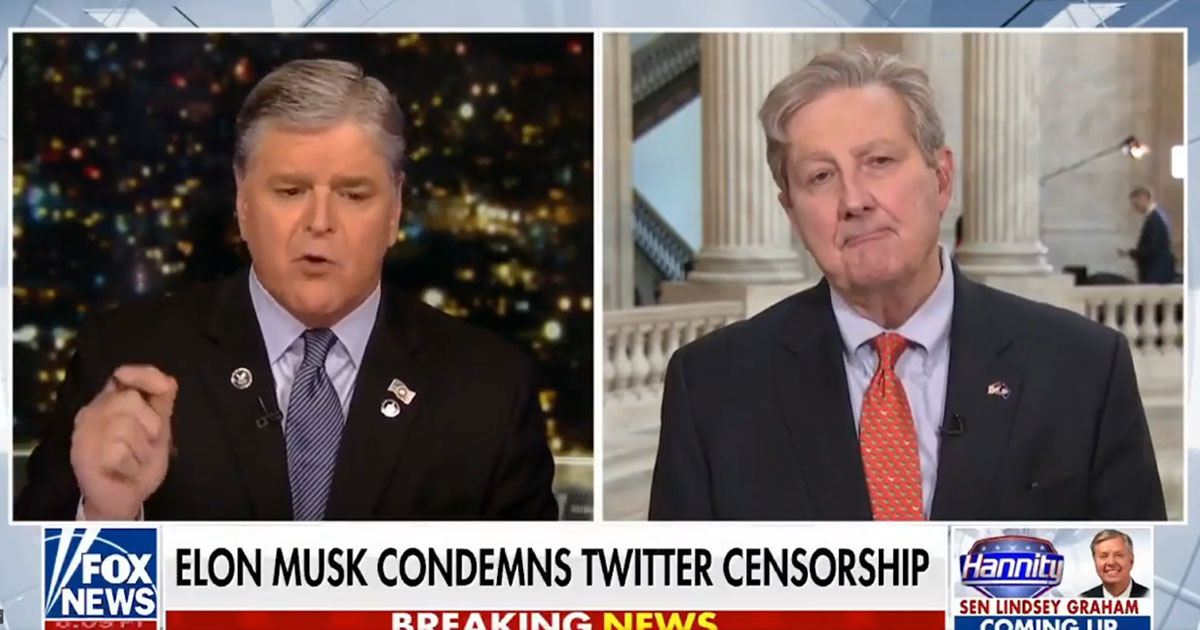 Fox News TV host Sean Hannity and Sen. John Kennedy (R-LA) bonded over a shared belief that “hate speech” should not be allowed on Twitter within moments of claiming to support free speech.

“Let me ask you, should there be – obviously you gotta have a limit, nobody should be able make a physical threat against somebody – ” Hannity said.

Here we see braindead @seanhannity and dopey @SenJohnKennedy in one sentence talk about how important free speech is and in the next say that "hate speech" must be banned because muh waycisms and muh andy-zemidisms!

“The question is, if you really want to have a freedom of speech platform, I mean any reasonable person with a conscience and a soul deplores real racism and deplores, um, real antisemitism,” Hannity said, prompting Kennedy to agree with an “Mhm.”

Hannity asked, “Uh, do you let those people say what they want and assume that the free market will weed them out and people won’t pay attention to them, or should there be some standards? That gets a little more complicated.”

Hannity has previously called for the U.S. to blow Russian president Vladimir Putin “off the face of the Earth” with nuclear weapons if the Russians used chemical weapons in Ukraine.

“If Vladimir Putin wanted to negotiate, he would have done it a long time ago,” Hannity said. “He’s not willing to, and if he wants to use chemical, biological, or nuclear weapons, he’s got to know that his entire country is going to get blown off the face of the Earth.”

“I pray to God we never get to that point, but it’s always been a threat,” the Fox News host continued. “And it remains a threat here, and we can’t cower in fear based on fact that we’ve had Mutually Assured Destruction pretty much for all our lifetime.”