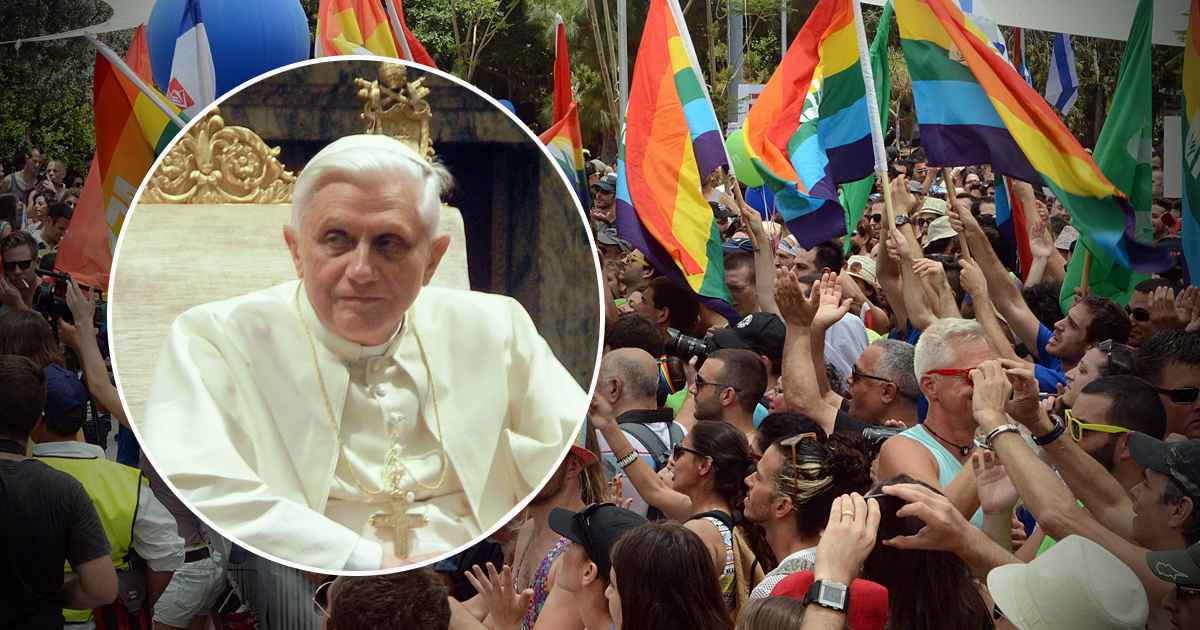 A new book from Pope Benedict XVI has been released posthumously, where the former Pope Emeritus claimed the clergy is betraying Catholicism to create a new, modern “catholicism,” and symptoms of the behavior include gay “clubs” operating openly in seminaries, and traditional Catholic values being rejected by bishops.

“What Christianity Is,” a collection of essays from Pope Benedict, born Joseph Ratzinger, was released following his death on New Year’s Eve last year. Some essays had been published previously, but the newly released ones included what appeared to be an attack on just how liberal the Catholic Church has become under the direction of his successor, Pope Francis.

Benedict wrote that bishops across the world, not just in America, have “rejected the Catholic tradition as a whole, aiming in their dioceses to develop a kind of new, modern catholicity.” As one example, Pope Francis endorsed Fr James Martin, New York-based Jesuit who has repeatedly challenged traditional teachings to fit the modern liberal world-view.

The former Pope, who retired in 2013, said that in seminaries, priest training schools, “students caught reading my books were considered unfit for the priesthood. My books were concealed as harmful literature and were read only in secret, so to speak.”

Benedict added that the “fury” from liberal sections of the Church, such as the progressive circles in Germany, “is so strong that the appearance of my every word immediately causes a murderous shouting from them. I want to spare myself and Christendom this.”

"For my part, in life, I no longer want to publish anything. The fury of the circles against me in Germany is so strong that the appearance of every my word immediately causes a murderous shouting from them. I want to spare myself and Christendom this." pic.twitter.com/ucenPcWSNX

In fact, the seminaries as a whole were suffering a “vast collapse” under Francis. “In various seminaries homosexual ‘clubs’ were formed which acted more or less openly and which clearly transformed the atmosphere in seminaries,” Benedict wrote.

The Pope claimed that he had even heard of one bishop who had allowed “seminarians to be shown pornographic films,” which Benedict ironically quipped was done “presumably with the intention of thereby enabling them to resist against behaviour contrary to the faith.”

Whenever there were challenges brought up by Benedict and others against the existence of the gay clubs, and the increase in progressive activity in the Church, he claimed that high-ranking Church officials “had joined forces in order to hide the real situation.”

When brought to Rome to discuss these issues, bishops conspired together to lie. pic.twitter.com/gVCyRXUBtO

The book from the late Pope Benedict is one of a number that have been published in the wake of his death at the end of last year. “Virtually all of these books have made waves, contributing to impressions of a mounting civil war in the church,” wrote John Allen Jr of the Catholic news outlet Crux.

“We are witnessing a monumental event in the history of the Churhc, the beginning of an outright civil war in the Church,” agreed Twitter commentator Pope Head. “If what is occurring right now in the Vatican occurred 400 years ago, Europe would undoubtably be dragged into outright war.”

If what is occurring right now in the Vatican occurred 400 years ago, Europe would undoubtably be dragged into outright war. The question at the heart of the conflict, is Francis a legitimate Pope?