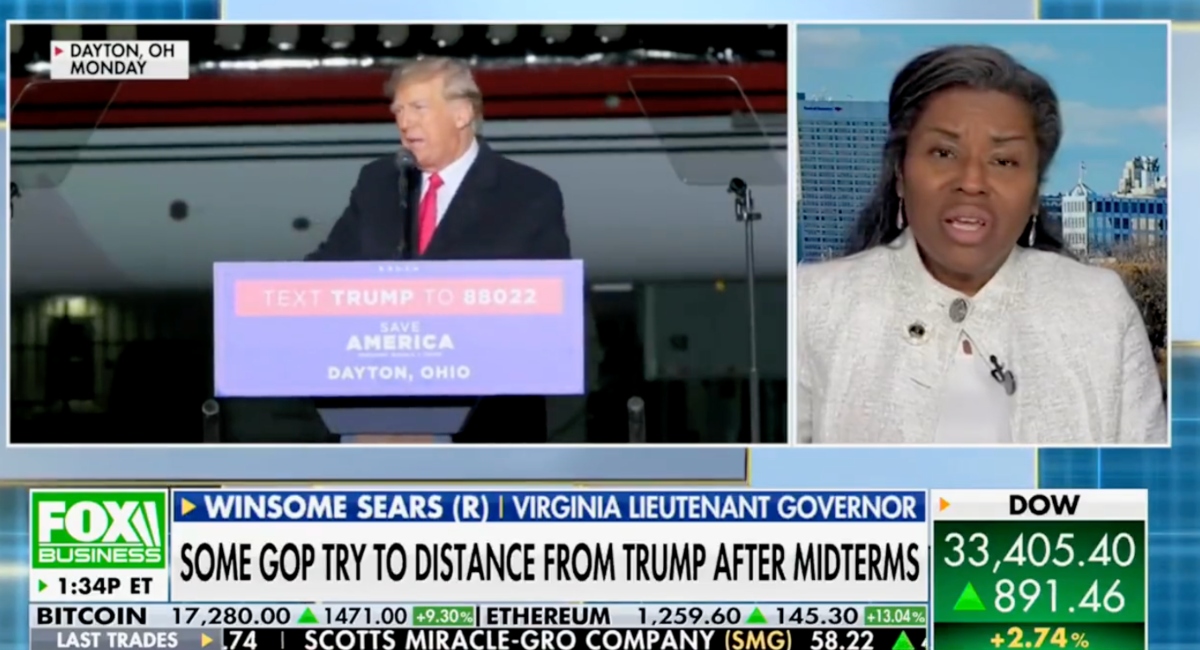 Virginia Republican Lt. Governor Winsome Sears blamed 45th President Donald Trump for the Republican Party’s underperformance in the midterm elections and stated that she will not support him if he decides to seek reelection in 2024.

Sears referred to President Trump as a “liability” to Republicans and claimed that voters sent him a message this week by voting for Democrats during a Thursday appearance on Fox Business with anti-Trump host Neil Cavuto.

While Sears casts the blame on President Trump for the Republican Party’s lack of a “red wave” across the country, it should be noted that most of Governor Glenn Youngkin’s endorsees in Virginia lost what were previously considered to be competitive congressional elections.

Despite having endorsements from the Youngkin administration, which would include Sears, Republicans were victorious in only one of three key House races — with Virginia Republican State Senator Jen Kiggans being the sole Youngkin endorsee to win her race against incumbent Democrat Congresswoman and January 6 Committee member Elaine Luria for Virginia’s 2nd Congressional District.

Nationwide, of the 15 states where Youngkin traveled in support of GOP candidates, only four saw clear Republican victories.

Some Democrat critics online have even gone so far as to brand Youngkin endorsements as the “curse of the red vest,” pointing out that most of his endorsees lost their elections.

“Good morning to everyone except the candidates who received a visit from @GlennYoungkin and suffered the #curseoftheredvest,” tweeted Democrat Virginia State House member Marcus Simon.

By comparison, the former president’s midterm endorsement success rate far exceeds that of Governor Youngkin, so it remains unclear how or why Sears views President Trump as a “liability,” given that over 90% of the candidates he endorsed reigned victorious.

“So many of the people I Endorsed went on to victory on Tuesday Night, nobody was even close,” President Trump wrote in a Truth Social post on Wednesday. “Almost all of the people I endorsed WON,” he added.

“219 WINS against 16 LOSSES IN THE GENERAL ELECTION, and yet the Fake News writes only unrecognizable junk. No wonder they are all doing sooo badly!” he wrote in a seperate post.

Some of those wins included Trump-endorsed Senator-elects JD Vance of Ohio and Eric Schmidt in Missouri, along with incumbents Marco Rubio, Chuck Grassley, and Ron Johnson.