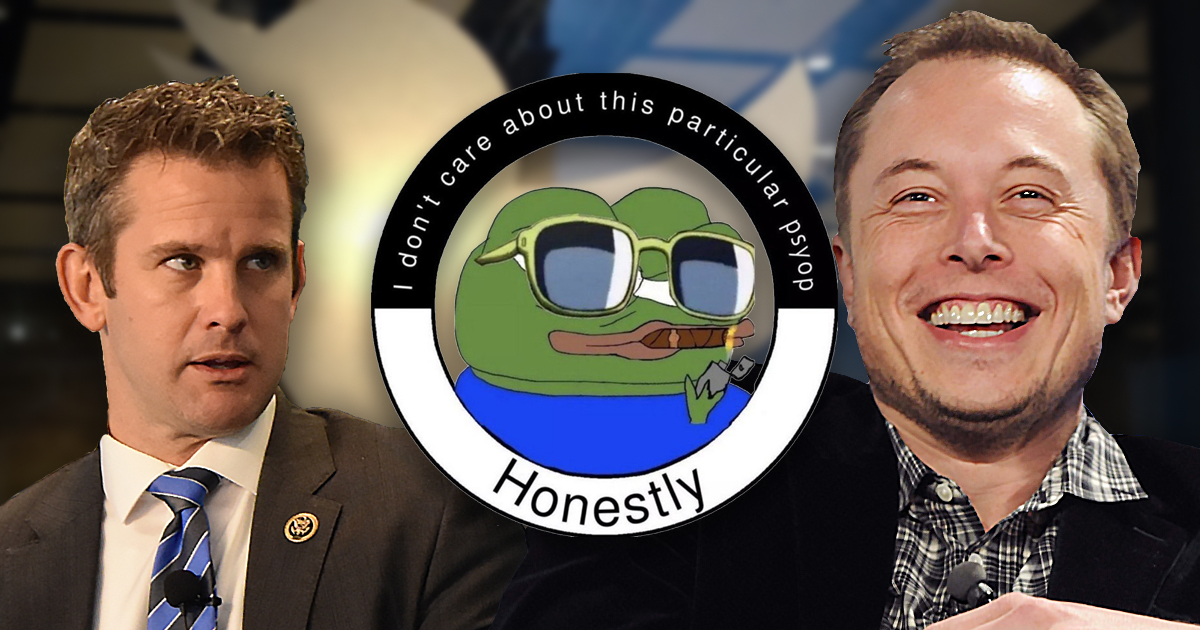 Outgoing US Rep Adam Kinzinger (R-IL) was the subject of widespread mockery on social media this week after having a meltdown over an image of a cartoon frog posted by Elon Musk.

On Monday, Twitter owner and African-American billionaire Elon Musk posted a meme featuring one of the derivative variants of Pepe the Frog, captioned “I don’t care about this particular psyop, honestly.”

The image itself was a derivative of the “I support the current thing” meme.

Rep. Kinzinger, known for emotional outbursts both during Congressional hearings and on his Twitter account, quote tweeted Musk’s post with the caption “Google Pepe the Frog. You’ll see that this is an alt right meme since 2016, with links to anti semetism and authoritarianism. Cool Elon.”

Google Pepe the Frog. You’ll see that this is an alt right meme since 2016, with links to anti semetism and authoritarianism.

The idea that the cartoon frog possesses an innate political agenda has been debunked since 2016, when left-wing activist organization ADL attempted to claim the frog was a “hate symbol.”

Over six years later, it is unclear why Kinzinger, a public figure who seemingly lives on social media, is not historically literate about one of the most popular internet memes of all time.

Yes, we all know you're an absolute moron, Adam…

Kinzinger was ridiculed earlier this year after falling for a meme that depicted popular comedian Sam Hyde as the “Ghost of Kiev,” a fictional Ukraininan fighter pilot.

Earlier this month, Kinzinger (R-IL) launched a political attack via Twitter on a decorated Green Beret and Gold Star husband over the weekend, but the tables were turned after he was called out on his own lack of combat service.

“Losing sucks I’m sure. I’ve never lost but I’m sure it does, loser,” Kinzinger tweeted at special forces veteran and U.S. House candidate Joe Kent. “White supremacy just doesnt [sic] win races like it did in 1921. Enjoy never being in congress.”

Kent is a former Army Ranger who went on to join the Fifth Special Forces where he logged eleven combat tours in the Middle East, rising to the rank of Chief Warrant officer.

Kinzinger served in the Air National Guard as a fuel tanker pilot and never saw combat, a fact Kent referenced in his response on Twitter.

“You speak like someone who has always had the privilege of being protected by a title,” Kent wrote. “Now that you quit congress, will you travel to Ukraine to finally experience combat without crew rest & within range of the enemy? Or is that too much for a fella?”