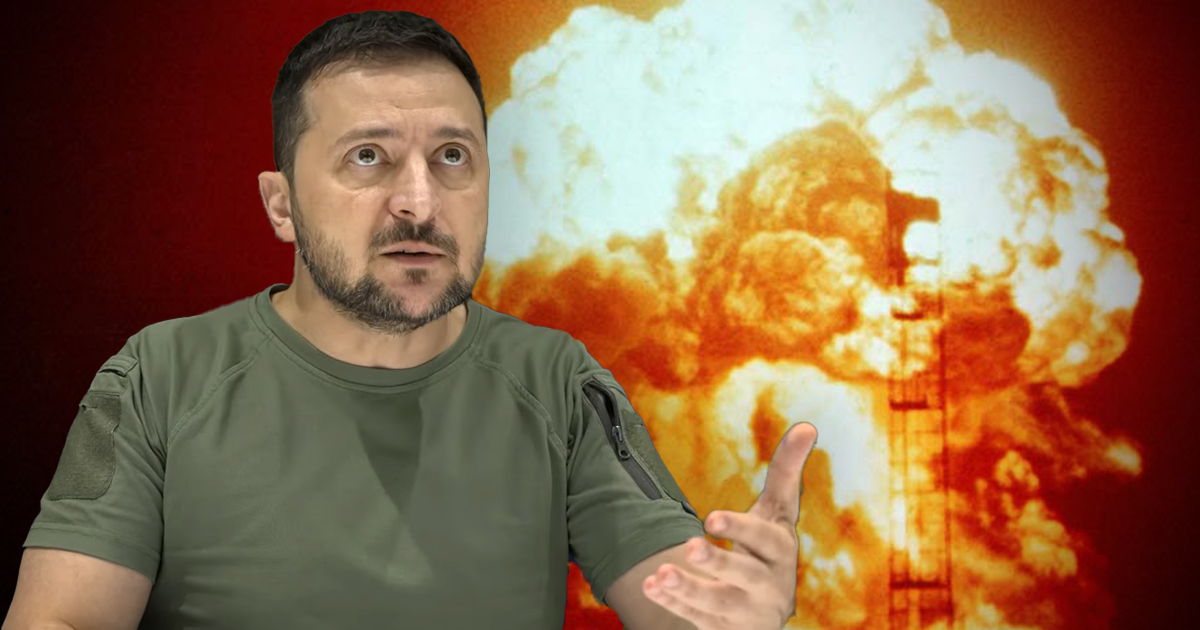 Ukrainian President Volodmyr Zelensky said that NATO must use preemptive “strikes” against Russia to prevent their use of nuclear weapons.

Speaking to Australia’s Lowy Institute via a live video link on Thursday morning, Zelensky called on the international community to “show strength” against Russia, and called on them put an end to “the aggressor’s ability to escalate.”

Michael Fullilove, the Executive Director of the Lowy Institute, asked Zelensky about the problem of “nuclear blackmail” from Russia. “Mr Putin told us the other day that he’s not bluffing,” Fullilove noted. “Do you believe that the likelihood of the use of Russian nuclear weapons has risen, and what more do you want NATO to do to deter Russia from using nuclear weapons?”

In response, according to translations from two different outlets, Zelensky said that NATO should “eliminate” the possibility of Russia using nuclear weapons on Ukraine, and use “pre-emptive/preventive strikes” so that Russia will “know what will happen to them” if they used nukes:

“What should NATO do? Eliminate the possibility of Russia using nuclear weapons. But what is important, I once again appeal to the international community, as I did before February 24: we need pre-emptive strikes, so that they’ll know what will happen to them if they use nukes, and not the other way around. Don’t wait for Russia’s nuclear strikes, and then say, ‘oh, since you did this, take that from us!’ Reconsider the way you apply pressure. This is what NATO should do: reconsider the order in which it applies pressure [on Russia].”

The translation matched a software-aided translation of Zelensky’s full remarks that were reported by a Ukrainian outlet. The reaction from many online was one of shock, with commentators arguing that what Zelensky has said was tantamount to a call to start World War Three, or bullying “globalist Americans” into kicking off a “nuclear holocaust.”

‘When I’m not posing for Vogue, I’m trying to bully globalist Americans into WW3’

Hollywood Zelensky can go F himself.

Turns out Zelensky's call for preemptive nuclear holocaust isn't Russian propaganda. But it doesn't matter does it, there will be no consequences for Zelensky. Plenty of respectable types in the West have been braying for Armageddon for months now.https://t.co/LEbCVBPycm

The corrupt puppet, Zelensky, is calling for NATO to “preemptively strike” Russia.

AKA he is begging NATO to start World War 3.

He would rather that the entire world burn than Ukraine lose its Eastern territories. 🚨 pic.twitter.com/zs25dn2BtH

Pedro Gonzalez, the independent conservative journalist, argued that Zelensky was now “worse than Putin,” because Zelensky “is a thug and a lunatic pretending to be a paragon of democracy.”

“Putin has again and again said that nuclear war would be a disaster for everyone,” Gonzalez added. “Zelensky has again and again tried to bait America into a nuclear intervention and is now openly calling for that. Which one of the two is more insane?”

Every Republican and Democrat who bent the knee to Zelensky betrayed the American interest. Zelensky is worse than Putin because at least Putin doesn't pretend to be something he's not. Zelensky is a thug and a lunatic pretending to be a paragon of democracy. https://t.co/mzvbjIfzIV

However, after the comments from Zelensky went viral, Ukranian officials attempted to pour water on the flames.  Sergii Nykyforov, Zelensky’s press secretary, wrote in a post on Facebook that people had “gone too far” with “nuclear hysteria,” and that people were discussing “nuclear strikes when there are none.”

Nykyforov noted that Zelensky referenced previous action taken against Russia before February 24, which was intended to prevent them from invading. “Let me remind you that the only measures that were about then were preventive sanctions,” he added. “To hint at the use of nuclear weapons is afforded only by the terrorist state Russia. You will never hear such calls from Ukraine.”

Mykhailo Podolyak, a top Zelensky advisor, said on Twitter that the circulating video was somehow “faked” by Russia. “Zelensky said nothing about a preventative nuclear strike on [Russia],” Podolyak tweeted.

“Zelensky reminded about Russian nuclear blackmail and suggested to preemptively outline the consequences for Russia and intensify strikes against it – sanctions and armed assistance to [Ukraine],” he concluded.

Another ru-fake.
1. @ZelenskyyUa said nothing about a preventive nuclear strike on RF.
2. Zelensky reminded about Russian nuclear blackmail and suggested to preemptively outline the consequences for Russia and intensify strikes against it – sanctions and armed assistance to UA.

Before the “clarifications” from Nykyforov and Podolyak were published, Illia Ponomarenko, a defense reporter at the Kyiv Independent, a pro-Ukraine outlet, tweeted that Zelensky had in fact been talking about preemptive nuclear strikes, and not “sanctions and armed assistance.”

To that: Zelensky said NATO should make it very clear to the Kremlin that a pre-emptive strike will follow a Russian attempt to nuke Ukraine.

As noted by Alex Rubinstein of The Grayzone, Zelensky is currently the bookmaker’s favourite to win the Nobel Peace Prize, the winner of which will be announced on Friday, “as he calls for a full-blown act of war from a 30-country alliance against a nuclear superpower.”

Time Magazine places Zelensky in the top slot of its list of "favorites to win the Nobel Peace Prize" as he calls for a full-blown act of war from a 30-country alliance against a nuclear superpower https://t.co/d2iaGg5Bdd https://t.co/j6cNdS72Kf