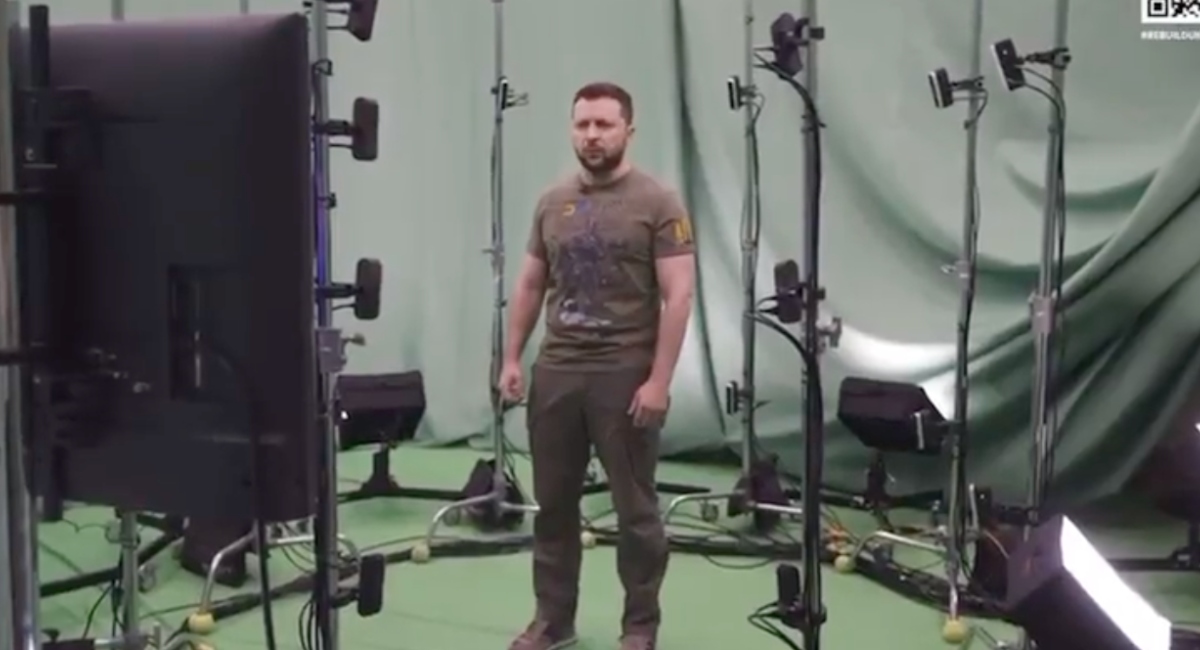 Video from roughly three months ago has resurfaced online purportedly showing Ukrainian President Volodimir Zelensky taking a break from managing his war with Russia on the front lines to hang out with a fashion designer and play with his green screen “hologram” technology.

Through the use of Talesmith & Hologram Director Martin William’s green screen “holograms,” Zelensky can apparantly be artificially placed at virtually any location he pleases to “make it feel like he’s more in the room.”

In the video clip posted to Twitter, Zelensky can be observed standing before what appears to be an elaborate green screen setup. In the next scene, Zelensky’s likeness can be seen in some sort of editing software, where he is then placed in another location.

Singer Oleksandr Balabanov makes an appearance in the Zelensky video and says “I don’t think I’ve ever seen this technology before.”

What a crazy stupid world we live in! pic.twitter.com/Ow0Es35T0B

The video clip appears to be a behind-the-scenes look at how Zelensky’s hologram was produced for the Paris Vivatech Conference in France, where the Ukrainian president pleaded for “aid from big tech firms” in June.

In his France remarks, Zelensky invoked Star Wars and the Second World War, pleading on listeners to assist him in countering Russian “tyranny.”

More recently, Zelensky called upon NATO countries to launch “preemptive strikes” against Russia, ostensibly through the use of nuclear weapons.

Every Republican and Democrat who bent the knee to Zelensky betrayed the American interest. Zelensky is worse than Putin because at least Putin doesn't pretend to be something he's not. Zelensky is a thug and a lunatic pretending to be a paragon of democracy. https://t.co/mzvbjIfzIV

“What should NATO do? Eliminate the possibility of Russia using nuclear weapons. But what is important, I once again appeal to the international community, as I did before February 24: we need pre-emptive strikes, so that they’ll know what will happen to them if they use nukes, and not the other way around,” the Ukrainian president urged NATO while speaking to Australia’s Lowy Institute.

The very next day, U.S. President Joe Biden warned attendees of a Democratic fundraiser that nuclear “Armageddon” was back on the table for the first time since the Cold War.

“We have not faced the prospect of Armageddon since Kennedy and the Cuban Missile Crisis,” he said, offering his bluntest comments about the use of nuclear weapons since Russia invaded Ukraine in February.