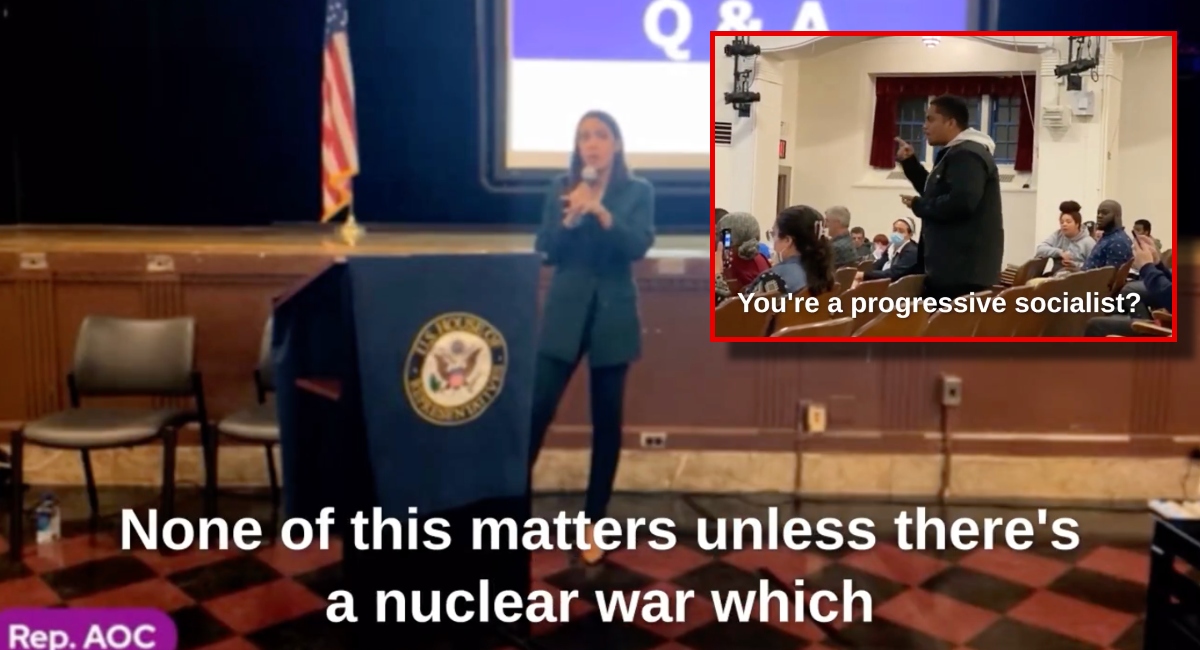 Rep. Alexandria Ocasio Cortez (D-NY) was called out by activists at a town hall over her support for “Ukrainian nazis” and continuing to vote in favor of funding their conflict with Russia, which they noted could lead to “nuclear war.”

The anti-war activists, Jose Vega and a Twitter user that goes by “Noggatone, ” interrupted the far left Democrat during a town hall meeting to inform her that none of her talking points truly matter if the U.S. faces a nuclear war with Russia over Ukraine.

“Congresswoman, none of this matters if there’s a nuclear war, which you voted to send arms and weapons to Ukraine,” Noggatone yelled at Cortez. “Tulsi Gabbard, she’s left the Democratic Party because they are war hawks!”

“Okay? You originally voted — you ran as an outsider. Yet, you’ve been voting to start this war in Ukraine. You’re voting to start a third nuclear war with Russia and China. Why are you playing with the lives of American citizens? You are playing with our lives,” the activist continued.

My friend @Noggatone and I confronted Congresswoman @AOC on her support for Nuclear War and Ukrainian Nazis. I call her out for being a coward in the face of the party that will push us all into Nuclear war right now. Will she stand up like @TulsiGabbard and fight for peace? pic.twitter.com/aQiQvQSWIN

Then, Vega chimed in to express his concerns with a potential global nuclear conflict and accused Cortez of sending money to Nazis in Ukraine, presumably referring to the controversial Azov Battalion.

“There will be no neighbors if there’s a nuclear bomb. You voted to mobilize and send money to Ukrainian nazis. You’re a coward. You’re a progressive socialist? Where are you against the war mobilization?” Vega said.

“He’s telling the right truth,” Vega said of his activist companion. “You have done nothing. Tulsi Gabbard has shown guts, where you’ve shown cowardice. I believed in you and you became the very thing you sought to fight against. That’s what you’ve become.”

“You are the establishment, and you are the reason why everybody will end up in a nuclear war unless you choose to stand up right now and denounce the Democratic Party,” Vega said. “Will you do that? Yes or no?” 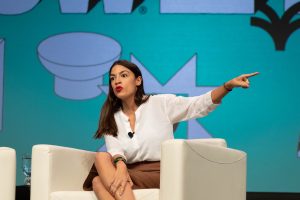 Cortez responded by claiming she couldn’t “hear” the activists, to which Vega retorted, “Okay, simple. Are you going to stop nuclear war? Yes or no?”

The leftist Congresswoman then asked the activists to “get in line.”

“There is no line,” Vega said. “Because this is bullshit. None of this matters if we’re all dead. None of it. You know that!” He added, “This is the only thing that matters right now. We could be in a nuclear war at any minute and you continue to fund it. That’s what’s going on.”

Cortez then attempted to brush the issue of nuclear war aside, claiming that she would address the activists concerns later on during the town hall and accused them of being “rude.”

“You’re the liar here!” Vega said. “Nobody has held you accountable. That’s what’s happening. And it is time for you to stand up and realize that what you’ve been saying has been lies. Let your conscience come through for once!”