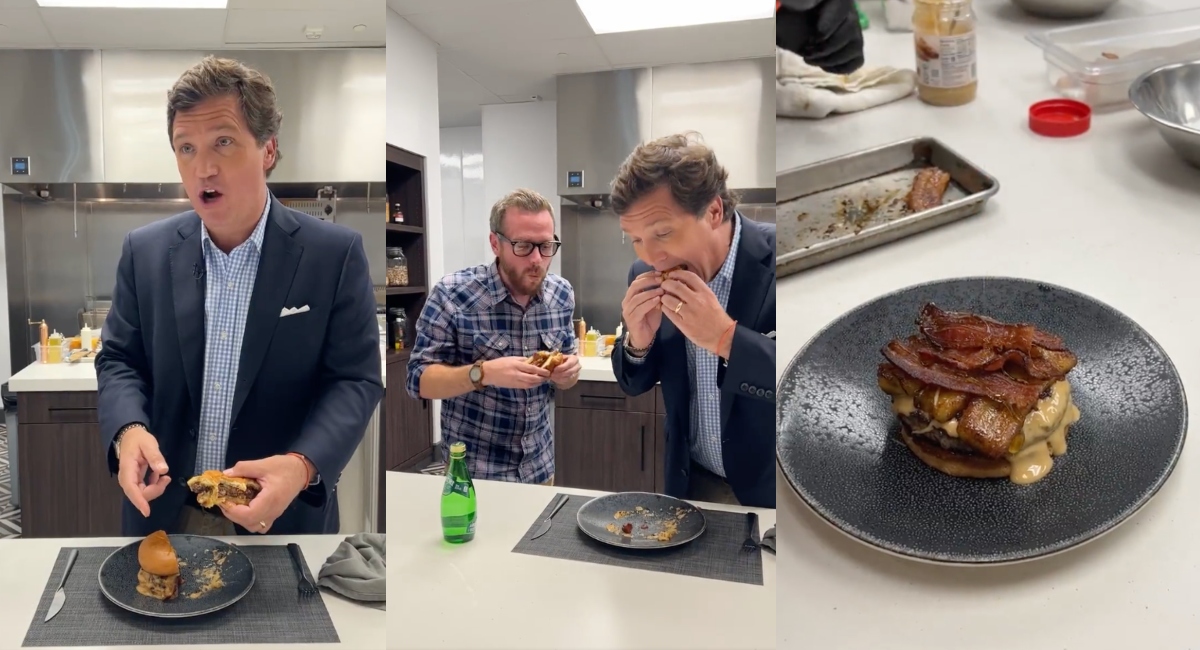 The Elvis burger, inspired by the late rock star Elvis Presley, is a burger style that consists of peanut butter, fried banana slices, and bacon.

“I’m Tucker Carlson. I’m at UFC headquarters. It is ‘Fuck It Friday,’ and in honor of that, we are about to have the Elvis burger,” Carlson proudly proclaimed in a video posted by White with the caption “The Elvis Burger with my guest, @TuckerCarlson #FuckItFriday.”

Carlson then instructed viewers on how to create the Elvis burger, listing off various ingredients, which included a splash of Howler Head Kentucky banana bourbon whiskey, which the Fox News host called “America’s greatest brown drink.”

“Toss slice bananas in sugar and fry it in some Howler Head, America’s greatest brown drink. Build your burger with peanut butter on the bun, a burger patty, more peanut butter, and fried bananas, and cooked bacon! Needless to say, then, drizzle some honey on top,” he said in the video.

After taking his first bite of the Elvis burger, a visibly surprised Carlson pondered on why people never thought to put bananas and Howler Head whiskey on a burger before.

“Why did no one, even Elvis himself, think to throw sliced bananas and Howler Head into a burger, it’s like unbelievable. That’s incredible,” Carlson said.

Carlson then invited his producer Tom Fox to enjoy the other half of the burger alongside him.

Related  Elon Musk Won't Reinstate Alex Jones To Twitter, 'Trump Decision Has Not Yet Been Made'