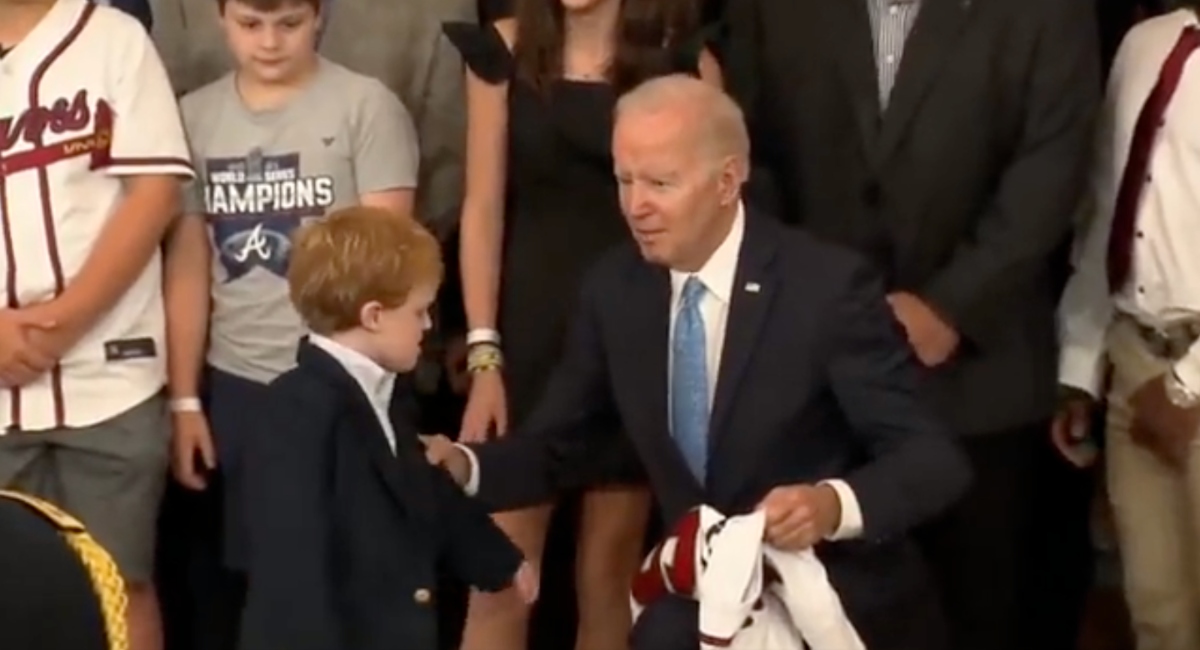 A little boy appeared to nervously flee the clutches of Joe Biden today following a nervous exchange during a photo-op with members on the Atlanta Braves baseball team, the winners of the World Series.

During the event, Biden eagerly urged “everybody under 15” to “come here” for a photo. Many young children assembled with their parents obliged, though several did so with trepidation and appeared eager to get away from the 79-year-old man.

After asking a few of the children for their names, Biden proceeded to grab their arms and yank them closer. Then, the president’s attention shifted to one small boy, with Biden kneeling on one knee and flashing a Braves jersey at the child, ostensibly to convince him to come closer.

Biden then grabbed the boy, pulled him close, and apparently posed for a photo as members of the crowd cooed and applauded the generational bridge. The boy, however, seemed less convinced.

“He’s not too sure,” Biden said of the small child, who quickly scurried away from the president when released from his grasp.

Biden: “Everybody under 15, come here”

The strange interaction is far from the first time Biden behaved strangely around young children.

Last month, Biden shared a moment with a 9-year-old girl that made many uncomfortable as he spoke at a campaign event for stroke survivor John Fetterman and gubernatorial candidate Josh Shapiro.

Biden, himself a survivor of brain surgery, spotted the preteen girl in the crowd and asked her age.

President Biden to child in Pennsylvania crowd: "How are you baby? How old are you? […] Almost double figures!"

At a separate event in May, Biden told a young child, “I love those barrettes in your hair” before adding, “she looks like she’s 19 years old sitting there like a little lady with her legs crossed.”

Joe Biden looks at a little girl in the audience, the daughter of a veteran, and says "I love those barrettes in your hair. Man I’ll tell you what, look at her she looks like she's 19 years old sitting there like a little lady with her legs crossed." pic.twitter.com/DbH8ihG2Mj

Biden’s behavior appears to be of concern among members of the White House, as one member of his staff, while dressed like the Easter Bunny, seemed to forcefully redirect Biden away from a group of little kids during an Easter event at the White House in April.

The Easter bunny retrieves Joe Biden after he wanders off to talk to some children pic.twitter.com/Wrd5L8p68B

Breitbart News White House reporter Charlie Spiering at the time posted video of the incident to Twitter, saying that the “Easter Bunny retrieves Joe Biden after he wanders off to talk to some children.”