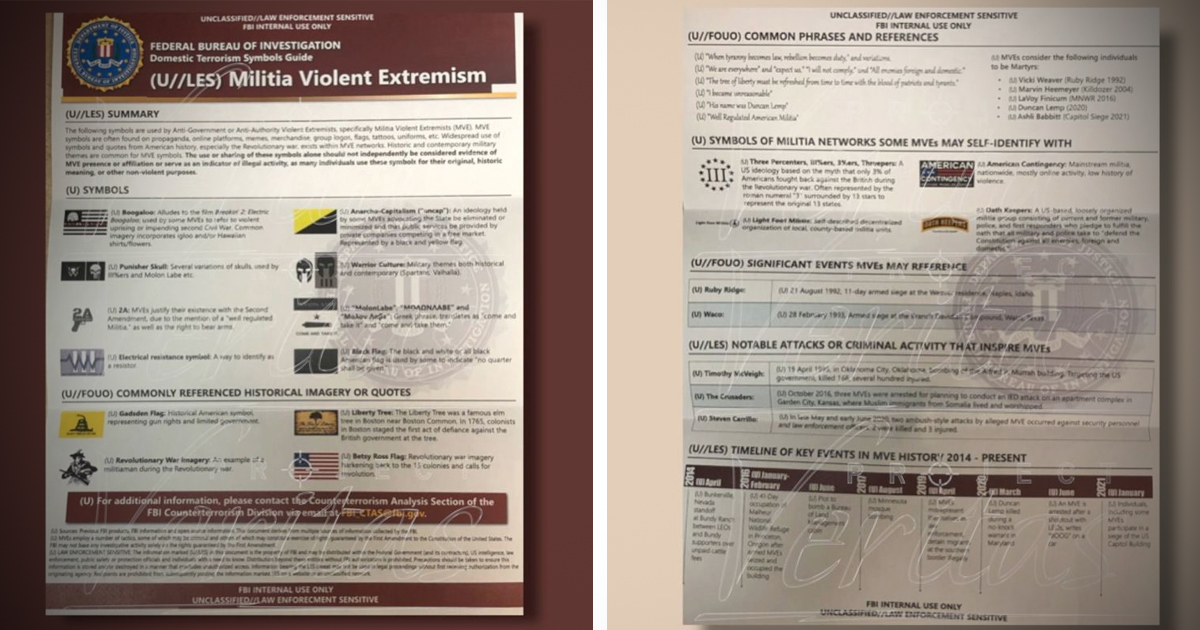 The FBI has declared that revolutionary imagery, such as the Gadsden and Betsy Ross flags, are domestic terrorist symbols, and that Ashli Babbitt was a “martyr” for “violent extremists.”

According to internal documents from the FBI leaked to Project Veritas by a whistleblower, the agency is focusing on how to identify and classify American citizens as “Militia Violent Extremists,” such as members of the Oath Keepers or Three Percenters.

The FBI warns that general imagery related to the American Revolutionary War, and symbols such as the Gadsden Flag, the Betsy Ross Flag, and the Liberty Tree, all point to potential domestic extremists:

A warning to those reading the document acknowledges that the use or sharing of these symbols alone should not independently be considered evidence of MVE presence or affiliation or serve as an indicator of illegal activity, as many individuals use these symbols for their original, historic meaning, or other non-violent purposes.”

As highlighted by Project Veritas, the Second Amendment itself is seen among the “symbols” section of MVEs, which they claim the groups use to “justify their existence… due to the mention of a ‘well regulated militia’, as well as the right to bear arms.” Other symbols include the idea of a “boogaloo,” Molon Labe, and the flag of the non-violent anarcho-capitalist ideology.

A section on “martyrs” includes a mention to Ashli Babbitt, the former USAF member who was unjustly shot and killed by Capitol Police during the 2021 Capitol protests. The document further links to radical terrorist activity, such as Oklahoma bomber Timothy McVeigh.

Phrases supposedly linked to domestic terrorists include one from 3rd President Thomas Jefferson, who once said that “the tree of Liberty must be refreshed from time to time with the blood of patriots and tyrants.”