The Biden White House is set to send another $4.5 billion to Ukraine to aid their defense against Russia, even as the United States economy continues to face unprecedented inflation, rising prices, and a widespread labor shortage.

According to the US Agency for International Development, the multi-billion dollar aid package would be sent to the Ukrainian government in parts, with a $3 billion payout expected to be sent to the Zelensky administration this month.

This new funding is designed to assist the Ukrainian government in maintaining their “essential functions” during the Russian invasion. This includes “social and financial assistance” for the poor and disabled, as well as supporting those fleeing from conflict who remained in the country itself.

USAID argued that this budget support has helped kept the flow of gas and electricity to schools and hospitals switched on, and paid for those necessary workers. 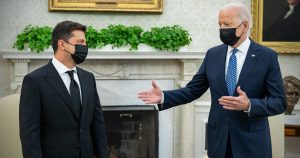 Estimates from the World Bank suggest that just over half of all Ukrainians will be in poverty by next year, as economists state that their annual deficit will grow to the 25% of GDP, far up from the pre-conflict 3.5%.

Together with the most recent package, America will have sent $8.5 billion in budgetary aid to Ukraine since Russia first invaded them in February of this year.

With $1.7 billion being sent in July, and $1.3 billion in June, the amount of money sent to embattled nation continues to grow.

On Monday, the Pentagon announced that Ukraine would receive an arms package worth $1 billion. When counting the amount contributed to arms and other tangible resources, Ukraine will have received over $18 billion from the US this year alone.

Unsurprisingly, many conservatives were angry at the decision from the Biden administration to send billions overseas during a time of severe economic crisis.

“Americans are struggling and oligarchs in Ukraine are laughing,” wrote Gavin Wax, president of the New York Young Republicans Club. “Congress is a loathsome institution.”

This is infuriating me. How much more of OUR money are we going to just send to this corrupt country that will probably not exist in a year?

Americans are struggling and oligarchs in Ukraine are laughing.

Congress is a loathsome institution. https://t.co/mhz3m2bXR7

Now I can afford steak again. Thank you Biden https://t.co/pVbVMN4W6Z

While they send endless BILLIONS over to Ukraine for "budget needs" and their border, they raised your taxes and printed more money that will result in more inflation. It’d be nice if they cared about our budget and our border half as much as they "care" about Ukraine’s. https://t.co/Lh3cJHzvlA

I guess I never knew walking around money for corrupt oligarchs who are busy filling their suitcases with cash before they leave the country forever was a "budget need." Learn something new every day. https://t.co/fUWgUmgypF

The White House continues to insist that the country is not experiencing a recession, which is traditionally defined as two consecutive quarters of GDP growth, but instead simply a “transition.”

“We had this strong economic growth because of the work that this president has done in the past 18 months,” said White House Press Secretary Karine Jean-Pierre. “And now what we’re seeing is a transition into stable and steady growth,” she added. “But we get it. We get that people are still feeling a little bit more pain.”

The United States and its allies have sent tens of billions to Ukraine, both in direct payments of cash and in military equipment provided to the war torn country.