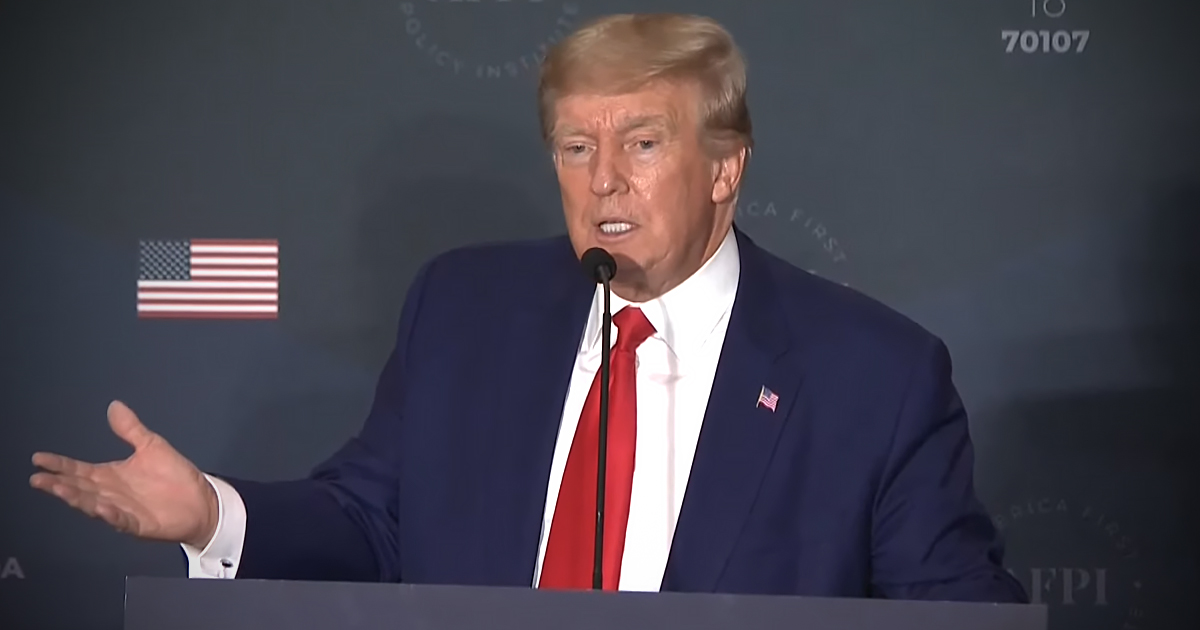 During a speech today in Washington, D.C. at the America First Policy Institute, 45th President Donald Trump laid out his vision to save America, which he stated is becoming a “failing nation” due to the policies of the Biden administration.

In his speech, Trump suggested that drug dealers should be executed, and added that doing so would save “500 lives” in each instance.

“It doesn’t take 15 years in court, it goes quickly, and absolutely, you execute a drug dealer and you’ll save 500 lives, because they kill on average 500 people,” Trump said.

The former Republican president then drew a comparison to countries that “don’t have any problem” with drugs due to their laws that allow for drug dealers to be executed.

Adding on the subject of crime, Trump reportedly stated that the National Guard should be deployed to high-crime American cities to restore order and stated that “politically correct” governors overseeing high-crime areas shouldn’t be allowed to interfere.

“Where there is a true and total breakdown of law and order, where citizens rights most basic rights have been violated, then the federal government can and should send the National Guard to restore order and secure the peace without having to wait for the approval of some governor that thinks it’s political correct,” Trump said.

“We’ve tried the soft approach for too long,” he reportedly added.

Among other remarks Trump made during the speech included a strong rebuttal against LGBT child grooming in American schools.

Related  Politico: We Might Not Know Midterm Results On Election Day

“A society that cannot protect its children is a society that will not be able to protect anybody. This is a hallmark of cultural and social decay against which we must fight back,” Trump said, condemning “the sickos pushing sexual content in kindergarten and puberty blockers to children.”

[Child transition supporters] are not just engaging in acts of depravity, in many cases they are breaking the law and they should be held fully accountable,” Trump concluded.

"A society that cannot protect its children is a society that will not be able to protect anybody. This is a hallmark of cultural and social decay against which we must fight back," Trump says of "the sickos pushing sexual content in kindergarten and puberty blockers to children" pic.twitter.com/0sToBfJNI1

Trump added that “we need to get political correctness and left-wing race and gender theories out of our military so that America can once again fight and win wars.”

“We have to abolish all COVID mandates and rehire every patriot who was fired from the military with an apology to them and give them their back pay that they’ve been waiting for,” Trump said.

“Just two years ago…we had a booming economic recovery like nobody has seen before, the strongest and most secure border in U.S. history, energy independence and even energy dominance, historically low gas prices, as you know, no inflation, a fully rebuilt military and a country that was highly respected all over the world,” Trump said.

“Very simply we had made America great again. We made it great again and we did it by putting workers first, by putting families first, and above all, by putting America First,” he added.

“There is time for us to bring America back from the brink,” Trump said. “We gather today on the verge of a historic midterm election.”