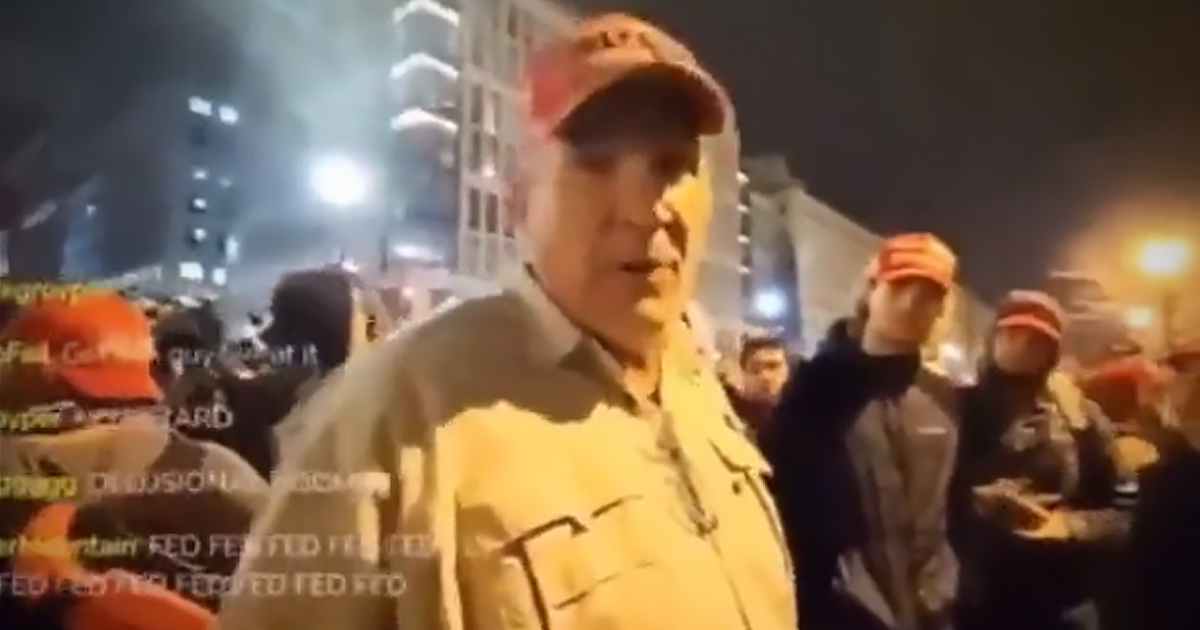 Screen grab from a video showing Ray Epps urge the crowd to enter the U.S. Capitol on January 6

Dr. Darren J. Beattie of Revolver News warns that Twitter appears to be allowing a “disinfo campaign” designed to discredit credible questions about Ray Epps, “the only individual caught on camera repeatedly urging people to go into the Capitol as early as January 5th” who has been portrayed sympathetically by the media.

Epps was recorded on video by right wing provocateur Tim Gionet, better known by his stage name Baked Alaska, urging a crowd of people to enter the U.S. Capitol as protesters gathered at a social function on January 5. Gionet urged the crowd to begin chanting “Fed” to drown out Epps’ words.

The next day, reported a  bombshell Revolver News article, Epps was recorded near the front of the crowd of protesters who first entered the U.S. Capitol building.

Now, Beattie warns that “blatant falsehoods regarding Epps began to emerge from various accounts on Twitter, generating a tremendous amount of views and engagement.”

The reporter highlighted two tweets which each have thousands of likes and retweets on Twitter, and seem to offer completely baseless theories about Epps and his wife.

In response to a tweet claiming “Freedom of Information Act requests” show Pelosi’s office had contact with Epps before January 6, Beattie wrote that it is “Enticing but there is zero evidence for this claim,” and urged conservatives not to “muddy the waters” with claims in the absence of evidence.

Enticing but there is zero evidence for this claim

Let’s not muddy the waters with bullshit https://t.co/48cWC7XqPV

Another tweet similarly went viral claiming, falsely, that Epps was tied to a company that creates voter machines used in American elections.

Related  DeSantis Raises $218 Million, More Than Any Governor Candidate In US History

“Dominion Voting Enterprises is a media and info services company based in Virginia, its parent company is Landmark Media LLC,” wrote Beattie. “Dominion Voting sells electronic voting hardware and software, and is based in Toronto and Denver. Different companies, zero evidence of any link,” he added.

“Just like the nonsense story that FOIA requests reveal calls from Epps to Pelosi, there is zero evidence that Dominion Enterprises has anything to do with Dominion Voting Systems,” the former White House official explained.

Dominion Enterprises is a media and info services company based in Virginia, its parent company is Landmark Media LLC

Dominion Voting sells electronic voting hardware and software, and is based in Toronto and Denver

Revolver News points out that this apparent disinformation surfaced shortly after the New York Times ran a sympathetic article featuring Epps, essentially claiming that the mysterious man became subject to a targeted harassment campaign due to conservative reports mentioning him.

“With the New York Times piece having utterly failed to do its job of damage control,” Revolver News explained, “it looks like the next phase in the effort to silence inconvenient discussion about Ray Epps is to flood the zone with false stories regarding Epps, and for the Regime to then use those stories to silence the genuine, legitimate, and critical questions regarding Epps that are making the powers that be sweat ‘big league.'”