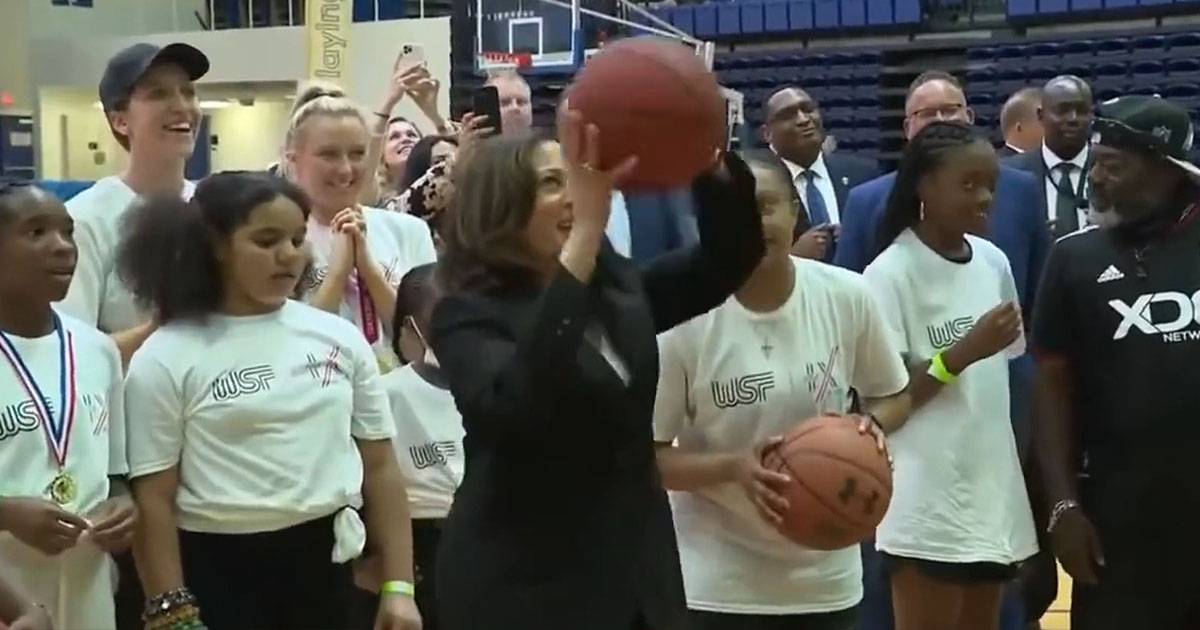 Vice President Kamala Harris missed five straight basketball shots from inside the three-point line during an event marking the 50th anniversary of Title IX at the American University sports center.

Viewers who viewed the four second clip posted to Twitter by Harris aide Opal Vadhan, however, were led to believe Harris sank her first shot.

In actuality, Harris labored on the court for nearly two minutes, missing shot after shot. Eventually, husband Dough Emhoff stepped in to show her how to properly shoot, and she made a bucket on her sixth attempt, which was then posted by Vadhan with a caption of three basketball emojis.

Many of Harris’ shots were “airballed,” making no contact with the backboard or rim. The vice president’s shooting average was an abysmal .17%.

Harris chose not to don a face mask for a photo op with masked young black students at Neville Thomas Elementary School in Washington, D.C. in April, drawing criticism on social media.

She announced $500 million in school grants to increase energy efficiency and promote progressive causes such as  “better health and educational outcomes” in “low-income communities of color that face under-investment and high pollution.”

“For decades, our country has chronically under-invested in our public schools and far too many of our school districts have gone without important repairs and upgrades to buildings and to classrooms,” Harris stated.

Following her prepared remarks, Harris invited young black students – all masked per compulsory guidelines supported by the Biden administration –  up onto the stage for a photo session.

Harris, who is of half-Indian and half-Jamaican descent, did not don a mask for the photo op.

Spread the love
In this article:Basketball, Commentary, Featured, Kamala Harris