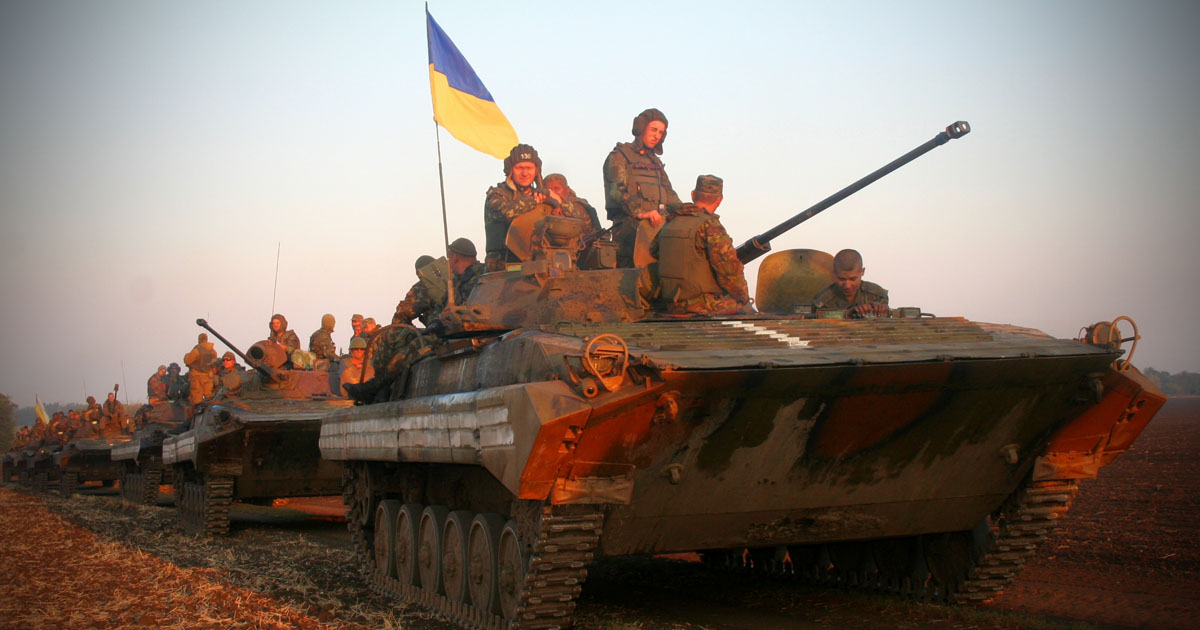 Ukrainian soldiers operating in the Donbass in 2014 (State photo)

Ukrainian forces fighting against Russian troops in the key eastern city of Sievierodonetsk “appeared on the cusp of retreat” on Wednesday, according to report by the AP.

While the city’s governor insisted that Ukrainian forces will continue to fight for “every centimeter” of the territory, the battle signifies a potential defeat for Ukraine amid a massive advance by Russian forces who aim to take control of the entirety of the eastern Donbass region, as set forth in their self-proclaimed “special military operation” that began in February.

According to the report, Russian forces are set to “close in on control of the entire Luhansk region,” marking a significant milestone in capturing one of two regions that make up the Donbass. Separatists in the area declared themselves to be the breakaway republics of Luhansk and Donetsk, and Putin became the only world leader to acknowledge their sovereignty days before the invasion began.

In the early days of the military conflict, Russian forces appeared to make an attempt to overrun Ukraine’s capital city of Kiev, but some have claimed that the advance in the north was part of a diversion maneuver by the Russian military to cause Ukrainian forces to dedicate fewer resources and manpower in the east.

Russia has since shifted its concentration to the eastern part of the country, where they seek to “liberate” ethnic Russians from what the Kremlin has described as “genocide” taking place by “Nazi” forces in Ukraine. The AP explains that Russia has since “shifted its focus to the region of coal mines and factories,” according to the report.

The Donbass region has partially been under the control of the Luhansk and Donetsk People’s Republics since 2014, thus “making supply lines shorter and allowing Moscow to tap those separatist forces in its offensive there.”

Luhansk Gov. Serhiy Haidai told the AP that “maybe we will have to retreat, but right now battles are ongoing in the city.”

“Everything the Russian army has — artillery, mortars, tanks, aviation — all of that, they’re using in Sievierodonetsk in order to wipe the city off the face of the Earth and capture it completely,” he said.

Valiant News reported last week that the Ministry of Defence for the United Kingdom acknowledged that Russia is winning the Ukraine war in the Donbass region.

“Russian forces have generated and maintained momentum and currently appear to hold the initiative over Ukrainian opposition,” said the MOD in an intelligence update.”Russia controls over 90% of Luhansk Oblast and is likely to complete control in the next two weeks.”

Ukraine struggles to hold its ground in bloody street-to-street fighting in the eastern frontline city of Sievierodonetsk as President Zelenskyy vows to retake Russia's gains in fighting, now in its 105th day

Western analysts have increasingly said that Ukraine appears to be losing the war, even as Ukrainian President Volodymyr Zelensky congratulated his country for withstanding 100 days of Russian advances and pledged to continue fighting.

Zelensky, who once said that the war could not end until Ukraine reclaimed all of its lost territory including Crimea, which was annexed by Russia in 2014, also recently acknowledged that the war must reach a “diplomatic” solution.

Still, Zelensky’s top advisor said those who support Henry Kissinger’s suggestion to end the war by ceding lands to Russia should “go f**k” themselves.

Russia attacked Ukraine on February 24 after a years long standoff over disputed territories in eastern Ukraine. Moscow claims it launched a “special military operation” to protect ethnic Russians in the breakaway republics Luhansk and Donetsk from Ukrainian state violence, while Kiev and its allies maintain the invasion was unprovoked.