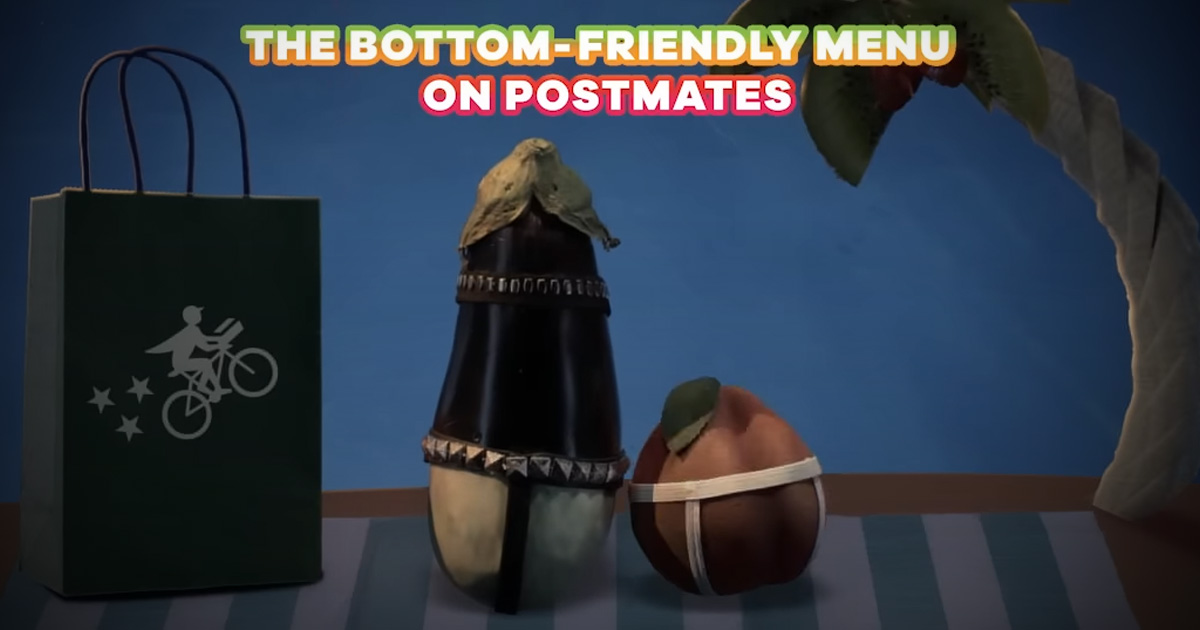 In the ad, featuring eggplants with harnesses representing tops, and peaches with jockstraps representing bottoms, comedian Rob Anderson recommended that bottoms should avoid “insoluble fibres” like grains or potatoes, as “the problem with these foods is that they don’t dissolve in water, which could cause a traffic jam in your digestive system, making a mess of your evening.”

You shouldn't miss a good meal for a good time. That’s why this Pride, we've teamed up with @DrEvanGoldstein and @smartthrob to create the world’s first Bottom-Friendly Menu (yup, it’s real). #EatWithPride pic.twitter.com/03Fm8YJlAP

“Soluble fibres and protein are the key to having some good clean fun. These all digest easily and slowly while feeding your good gut bacteria,” the advert noted.

“There’s no right or wrong way to bottom, but if you’re planning on getting peachy this Pride, the Bottom Friendly Menu on Postmates has the kinds of foods that could keep you feeling good.”

Postmates has partnered with a number of restaurants in New York and San Francisco to serve the menu to their customers during LGBT Pride month. The Uber-owned company also made a donation to the Okra Project, “a black woman-led collective that addresses food insecurity, mental health, and financial barriers faced by the trans community.

As noted in the credits, the advert was designed and produced at least in part by Psyop, a company dedicated to “capturing hearts and minds with iconic visual storytelling and design.”

According to Adage, the team behind the campaign was mostly LGBTQ+ themselves.

Postmates appears to have one-upped the competition, as as Burger King Austria recently assured its consumers that its LGBT advertising was not referencing sex acts.

Valiant News reported on Wednesday that Burger King Austria had launched the new LGBT Pride Whopper to celebrate gay pride month, where users could order a Whopper with either two top or two bottom buns. Those who viewed the advertising initially thought the burger company referenced the sexual positions of gay men, “tops” and “bottoms,” but Burger King clarified that this was not the case.