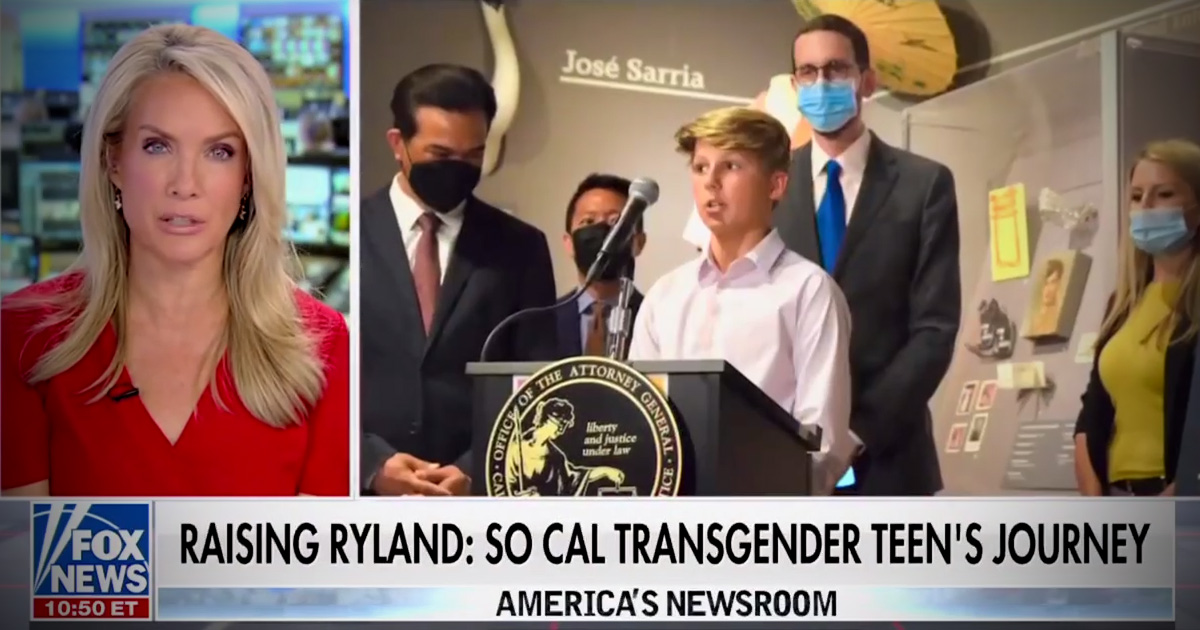 In a segment on Friday, Fox News uncritically promoted the story of a transgender teenager who transitioned to a boy at age 5, as part of their LGBTQ+ Pride Month coverage.

The segment on America’s Newsroom, hosted by Dana Perino, focused on the story of Ryland Whittington, a biological girl who started her “journey of transitioning” at the young age of 5, supported by their parents.

“14-year-old Ryan Whittington is a typical southern Californian teenager,” Fox News reporter Bryan Llenas claimed, apart from being transgender. According to the Whittington family, even before she could speak, Ryland “managed to tell his parents that he is a boy,” with mother Hillary recounting that Ryland felt “painful” wearing feminine clothing.

I’m stunned that Fox News ran a segment celebrating a girl whose parents “transitioned” her into a boy when she was 5 because she apparently told them she was a boy “before [she] could talk.” Absolutely maddening & heartbreaking. https://t.co/T8k1QQS6uH pic.twitter.com/kCvacbtY3X

(Part 2)
Fox should be telling the stories of detransitioners! The ones who get shut out — the people who were transitioned too young before they could make a true decision. Trans gets enough exposure on all the other networks! pic.twitter.com/0sbnkaOGhn

“Unlike some trans kids, when Ryland came out at 5 a few years later, he had the full support of his parents,” Llenas reported. A YouTube video posted in May 2014, when Ryland was just 7, discussed her transition story, and reached national news, with a short film, “Raising Ryland,” featuring on CNN.

The mother also wrote a book with the same title in 2016.

The story from Fox News, which is being broadcast as part of the network’s “America Together” programming for LGBTQ+ Pride Month continued, noting an uncritical quote from Ryland’s mother that gender and sexuality are different things, “and that children do recognise their gender identity very young.”

The trans flag and everything pic.twitter.com/f8tnIp7rZN

A second quote noted that the family had “listened” to Ryland, and that their decision was based on the mother’s “conservative” faith. “For me, it’s just a deep spiritual belief that we believe in God, and that He created us the way he wanted us, so then yes, He created Ryland just the way he is,” she said.

The Whittington family recounted that in transgender support groups, one father said that they were “lucky” to have supported Ryland so earlier, as their child had started self-harming.

“I’d rather have a living son than a dead daughter,” Hillary said. “I guarantee that if we had pushed back and done what a lot of parents do, I don’t think we would have one of the kids that you see before you here today.”

Following Ryland’s transition, the family had become active in campaigning on transgender issues. In 2021, he spoke at a press conference in favour of a travel ban by California state employees to other states that were not LGBTQ-friendly enough.

A still image from the event was included in the Fox News report, which clearly shows Californian state senator Scott Weiner standing behind Ryland. Weiner last week proposed “Drag Queen 101” should be part of the K-12 curriculum, successfully pushed a 2020 bill that that relaxed sex offender registry requirements, and stopped knowingly spreading HIV from being a felony in the state.

"To all of the leaders who are attacking trans kids like me around the country: We just want the same rights as everyone else." #LetThemPlay pic.twitter.com/KzcOv5yXGB

“The Whittingtons believe sharing their story could make a difference in another child’s life,” Llenas concluded in his report, saying that the family displayed “extraordinary courage.” He claimed that transgender issues had been “politicised,” and that “people are afraid of what they do not understand.”

Related  Biden Shouts ‘Everybody Under 15, Come Here’ Then Clutches Small Boy For Photo

“This family hopes their story will lead to more understanding, more acceptance, and ultimately, more love,” he said.

Valiant News reported earlier this month that the Florida Health Department was looking to ban “gender affirming” treatment for transgender youth, saying that evidence for their effectiveness was severely lacking. While in Arizona, the state’s Department of Education pushed preteens to secretive, pro-transgender chat-rooms run by Planned Parenthood and others.