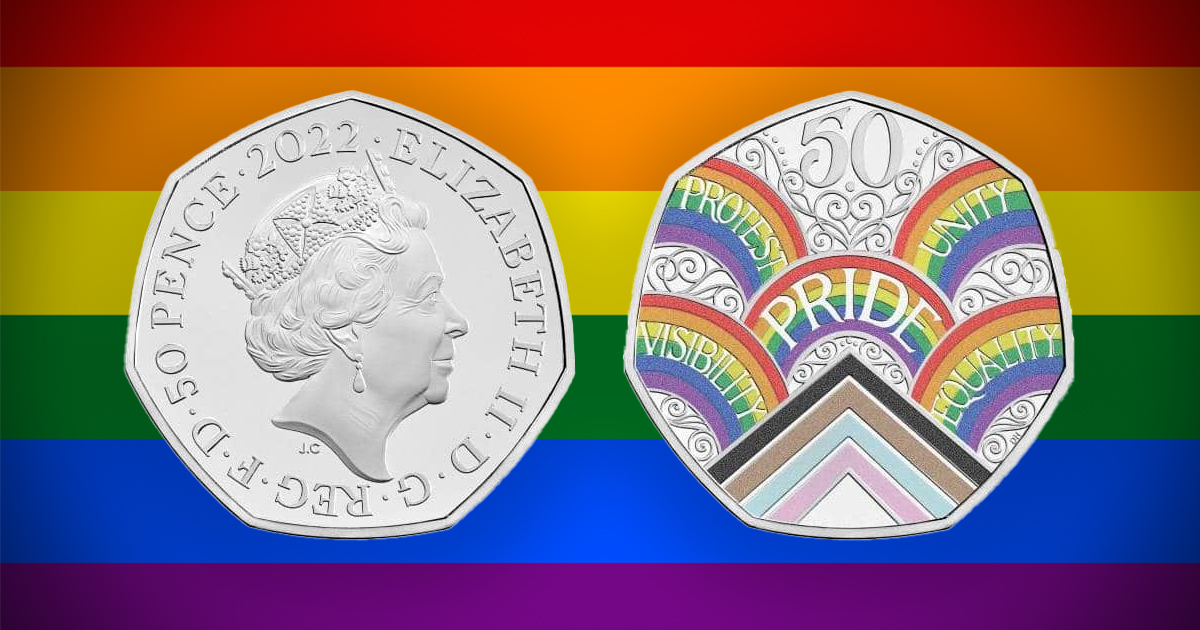 The Royal Mint has announced a new 50 pence coin, emblazoned with gay and transgender pride symbols, to celebrate half a century of LGBTQ+ Pride in the United Kingdom.

The new coin produced by the Royal Mint was designed by London-based tattoo artist Dominique Holmes, and features five rainbow flags, and a blue and pink transgender pride triangle, which also features two black and brown stripes to represent gay people of colour.

The coin was created to mark the 50th anniversary of the first LGBTQ+ Pride parade in the UK, which was organised by the Gay Liberation Front and took place in London in 1972. Clare Maclennan, the Director of Commemorative Coin at the Royal Mint said in a statement it was “a privilege” to mark the “milestone celebration” of gay pride.

“This is the first ever UK coin dedicated to Britain’s LGBTQ+ community, with colour printing technology capturing the spirit of Pride UK with its iconic rainbow colours,” Maclennan said.

Pride in London, the group that currently hosts the gay pride event, was invited by the Royal Mint to strike their own coins as part of the launch.

“It was a privilege to visit The Royal Mint as part of our partnership and see our coin being made,” said Asad Shaykh, the Director of Marketing and Communications at Pride in London.

“It humbles me greatly that the words that I coined for the brand, PROTEST, VISIBILITY, UNITY & EQUALITY – will be on an actual coin, opposite the Queen,” Shaykh said.

“This queer brown immigrant has come a long way, powered by hope, love and this city. Nowhere in the world had this been possible, except the UK. Pride in London feels very proud today.”

The press release from the Royal Mint confirmed that the government-owned private company has also created a network of “Diversity and Inclusion champions,” and forced all staff to undergo diversity and inclusion training.

An LGBTQ+ society for employees that holds regular sessions has been created, in order to ensure staff show “allyship” with the community.

The 50p coin will not enter widespread circulation, but will instead be available to buy via the Royal Mint website in the summer, alongside such other coins as the “DIVERSITY BUILT BRITAIN” 50p coin, which was designed to celebrate the “contribution of ethnic minority communities” to British history and culture.