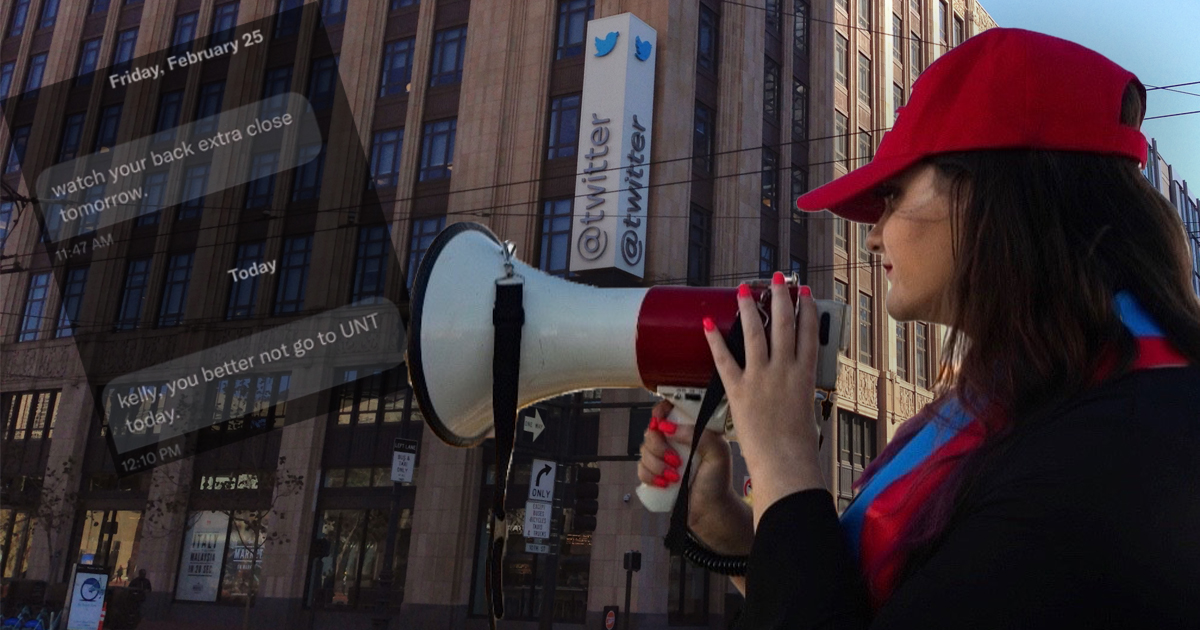 Twitter has temporarily suspended the account of college conservative Kelly Neidert, after she stood up to repeated harassment from violent Antifa activists.

Neidert, who graduated from the University of North Texas last week, has faced vicious harassment, for daring to stand up for conservative values on campus.

An event hosted by Neidert in March featuring then Texas gubernatorial hopeful Jeff Younger, was heavily protested by leftist activists, and she had to be escorted home by police.

After reviving the local chapter of the Young Conservatives of Texas, Neidert has experienced various threats of violence online but offline as well – in April, her front door was spray-painted with the phrase “stay home Nazi c**t.” Another shocking example included a leftist account sending Neidert a satellite image on Twitter of her own parents’ home.

Antifa is now resorting to stalking and intimidating college girls for being conservative. pic.twitter.com/Nqh5deIfuI

Speaking to Valiant News, Neidert said that she had “just had enough” of the harassment, and decided to fight back by exposing Antifa activists on Twitter.

“I’ve been going to local Antifa meet-ups where I can get good pictures of them, and I’ve been identifying them,” Neidert said. “If I can’t find the person myself, I’ll ask my followers for help.”

While she does name and shame these activists, Neidert makes sure to never post identifying details such as home addresses, and condemned doxing. Unsurprisingly, Neidert has had her account suspended for one week by Twitter, for allegedly breaking community standards on “violence” and hatred.”

Twitter did not inform Neidert which tweets allegedly broke their rules.

BREAKING: TX college conservative @kelly_neidert has been SUSPENDED by @Twitter for exposing leftists on Univ of Northern Texas campus who vandalized her apartment, threatened/stalked her & demanded she be expelled for standing up to alphabet mafia /woke mob. @elonmusk @GovAbbott https://t.co/gYB2ikwZGQ pic.twitter.com/5FWhVLRZui

She told Valiant News that this was just another example of Big Tech bias against conservatives, and suspects that it is purely down to mass reporting from “local Antifa” groups. “They got my TikTok account banned, I was banned from Instagram at one point,” she added.

Neidert pointed out that the posts that were removed from Instagram was either footage of her getting attacked by Antifa, or screenshots of violent threats that she has received. T”hey were getting removed for all sorts of things, like hate speech and violence, even though all of that was directed at me,” she said.

“I get comments taken down… but the people who are making way worse comments at me never get theirs removed,” Neidert added.

Last night I was mobbed by about 50 people on campus, some who were waving a black nationalist flag. They were hitting, shoving, and pouring water on me.

This was just 5 days after my appointment door was spray painted and vandalized by antifa. pic.twitter.com/qQn5n9J9ye

Neidert is set to enter into politics, after starting up a new grassroots organisation, Protect Texas Kids, where she will be fighting against “leftist indoctrination of children, so hopefully by the time they get to college they have a little more sense” than some of the “crazy” students she has gone up against at university.

“I want to work in politics because everything in the world is so messed up right now, and there don’t seem to be many conservatives who are willing to stand up for themselves and others and fight for conservative values,” she added.

Valiant News reached out to Twitter for comment on this story, but did not receive a response before publication.