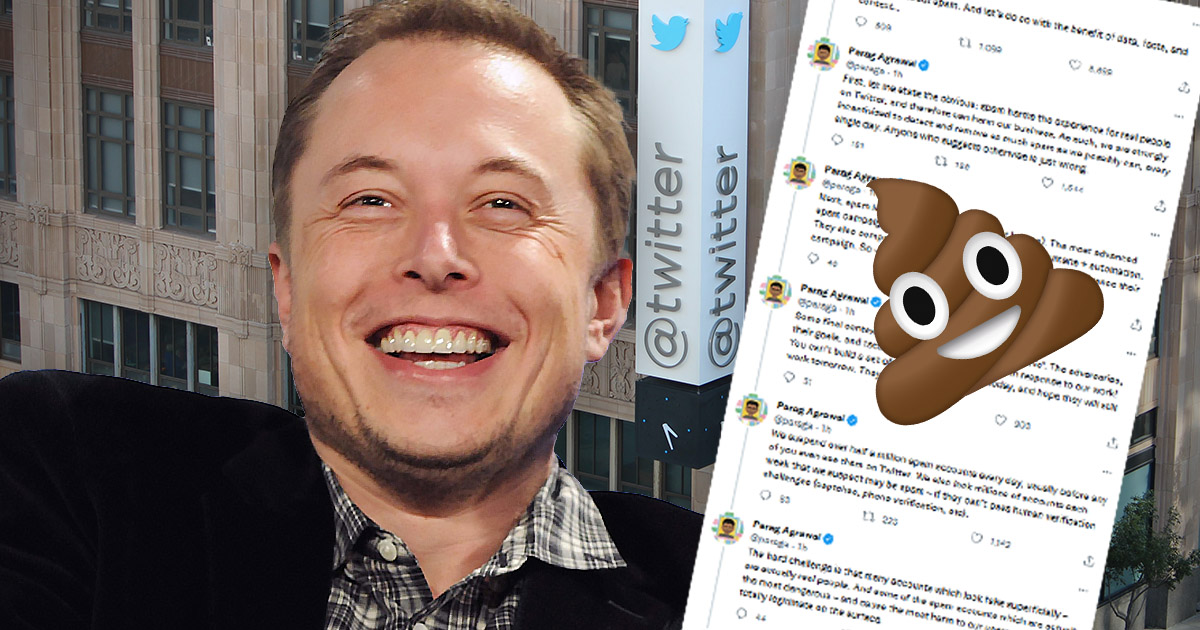 Tesla and Space X CEO Elon Musk was unimpressed with Twitter CEO Parag Agrawal’s lengthy explanation for how the big tech platform fights spam, with the South African billionaire responding with an unflattering emoji and a probing question about Twitter’s advertising practices.

Agrawal wrote a 13-tweet thread about how his platform fights spam bots after Elon Musk expressed doubt in the company’s claim that only 5% of its users are bots and put his acquisition of the company on hold.

The Twitter CEO claimed that Twitter uses a variety of internal metrics to determine which users are real or fake, and bans more than 500,000 spam accounts each day. Still, Agrawal admitted, the platform’s internal policies are not perfect, and Twitter spammers frequently change their tactics, which leads to their estimate of a 5% presence on Twitter.

Agrawal also claimed that no external estimate – like the one Musk ordered before his purchase continues – could account for Twitter’s vast knowledge of its own users.

“Unfortunately, we don’t believe that this specific estimation can be performed externally,” wrote Agrawal. “Externally, it’s not even possible to know which accounts are counted as” real users “on any given day.”

Unfortunately, we don’t believe that this specific estimation can be performed externally, given the critical need to use both public and private information (which we can’t share). Externally, it’s not even possible to know which accounts are counted as mDAUs on any given day.

Musk replied with a poop emoji and asked how this lack of transparency impacts Twitter’s advertisers.

“So how do advertisers know what they’re getting for their money?” Musk added, “This is fundamental to the financial health of Twitter.”

So how do advertisers know what they’re getting for their money? This is fundamental to the financial health of Twitter.

Musk announced his plan to buy Twitter earlier this year after the platform banned or suspended a series of high profile conservative accounts for referring to transgender Four Star Admiral Rachel Levine as a man.

Twitter’s board ultimately accepted Musk’s offer to buy the company for $54.20 per share, about $44 billion total, after Musk hinted that he was planning a direct offer to the company’s shareholders.

Some have suggested Musk is attempting to back out of the Twitter deal without having to pay the $1 billion required to break the contract, while others have insinuated that Musk is attempting to lower the purchase price – which he insisted was his best and final offer – before the deal closes.