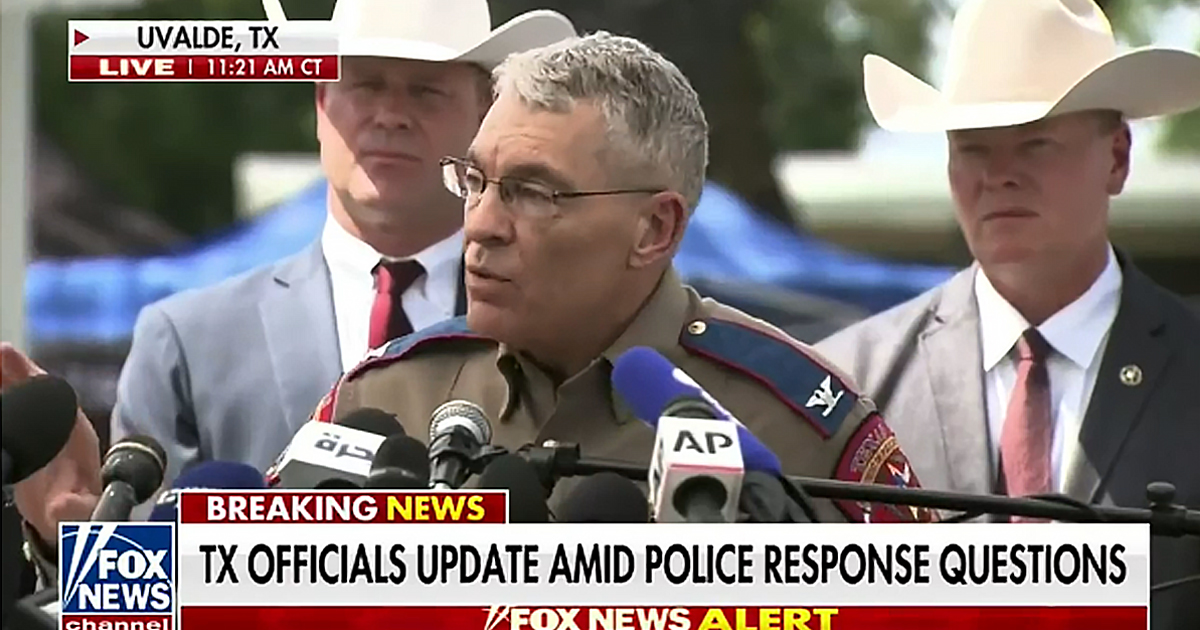 Texas Department of Public Safety Director Steven McCraw admitted the law enforcement made an incorrect decision when waiting outside the Uvalde elementary school where a horrifying shooting took the lives of more than 20 people, including 19 children.

Apparently the severity of the mass casualty event was exacerbated by police officers who waited outside the building for reinforcements rather than storming it immediately, and was potentially made possible by a teacher propping a door open.

McCraw admitted that officers made a mistake by not immediately entering the building to incapacitate the shooter before he could cause more damage, an allegation that was raised as reports of parents being handcuffed and detained while the shooter rampaged inside surfaced.

“There were plenty of officers to do whatever needed to be done with one exception,” McCraw admitted. “The incident commander inside believed they needed more equipment, or more officers to do a tactical breach at that point.”

This statement prompted a chorus of excited interruptions from reporters asking McCraw to explain. “With the benefit of hindsight,” he began before being overwhelmed by the crowd.

NOW – Texas official says "it was not the right decision" to delay sending in law enforcement into the school.pic.twitter.com/YUTKDIJBOm

“From the benefit from where I’m sitting now, of course it was not the right decision. It was the wrong decision, period. There’s no excuse for that,” said McCraw.

“When there’s an active shooter, the rules change,” he added. “It’s no longer a barricaded subject. We don’t have time, you don’t worry about outer perimeters.”

In what may amount to a full disavowal of the officers’ actions, McCraw said that all Texas law enforcement is trained to race toward an active shooter.

“We don’t care what agency you’re from, you don’t have to have a leader on the scene,” said McCraw. “Every officer lines up, stacks up, goes and finds where those rounds are being fired at and keeps shooting until the subject is dead. Period.”

McCraw explained that the Chief of Police “was convinced” there was no more threat from the shooter, who he believed was barricaded. Thus, the delayed police response was attributed to the false belief officers “had time to organize with the proper equipment to go in.”

"[The Chief of Police] was convinced at that time that there was no more threat to the children and that the subject was barricaded and that they had time to organize with the proper equipment to go in." pic.twitter.com/BFzn1h0daX

McCraw also offered a complete timeline of the shooting, as reported by The Post Millennial.

The incident began at 11:30 a.m. when the shooter began shooting between vehicles. McCraw says the shooter, identified as Salvador Romas by police, entered the school through a side entrance that was propped open by a teacher.

Three police officers entered the school using the same entrance as the shooter, and received “grazing” gunshot wounds. The suspect then entered a classroom and locked the door.

Students continued to dial 911 and beg for police to respond until as late as 12:46.

Related  Trump Predicts 'Big Problems' If Biden Indicts Him: 'I Just Don't Think' America 'Would Stand For It'

McCraw says that by 12:50, over one hour after the incident began, officers had shot the suspect and were clearing the classrooms of survivors.