Russia has lifted the mine warning for the Mariupol port and reopened it to civilian traffic the week after the controversial Azov battalion surrendered from its entrenched position in the Azovstal steel mill to the east of the city.

The Russian defense ministry said today that civil vessels may again use the Azov Sea port in Mariupol, Reuters reported.

According to Reuters, the development came after Russia took full control of the city last week following the surrender of more than 2,400 Ukrainian fighters. Most reports indicate these were overwhelmingly fighters in the controversial Azov battalion. 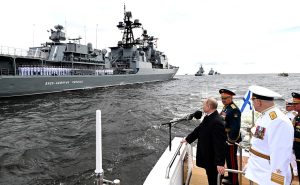 The Azov battalion had been deeply embedded in the Azovstal steel mill, a gargantuan facility that had been in continuous operation since it was reactivated by the Soviet Union after Ukraine was recaptured from Nazi Germany during World War II.

Fighters were strewn throughout Cold War-era bunkers beneath the steelworks that were created to allow the factory to continue production in the event of nuclear war.

The video reveals some of the surrendering fighters have neo-Nazi tattoos.

Neo-Nazi iconography has long been associated with the Azov battalion, though international media claims the presence of far right extremists in the military unite has been over exaggerated. Around the beginning of the conflict, the BBC claimed only around 10% of the fighters harbored neo-Nazi beliefs.

Russia invaded Ukraine on February 24 with the goals of “denazifying” Ukraine and forcing it to adopt a neutral posture regarding NATO and the European Union following a years long standoff over disputed territories in eastern Ukraine.

Moscow claims it launched a “special military operation” to protect ethnic Russians from Ukrainian state violence in the breakaway republics Luhansk and Donetsk, while Kiev and its allies maintain that the invasion was unprovoked.