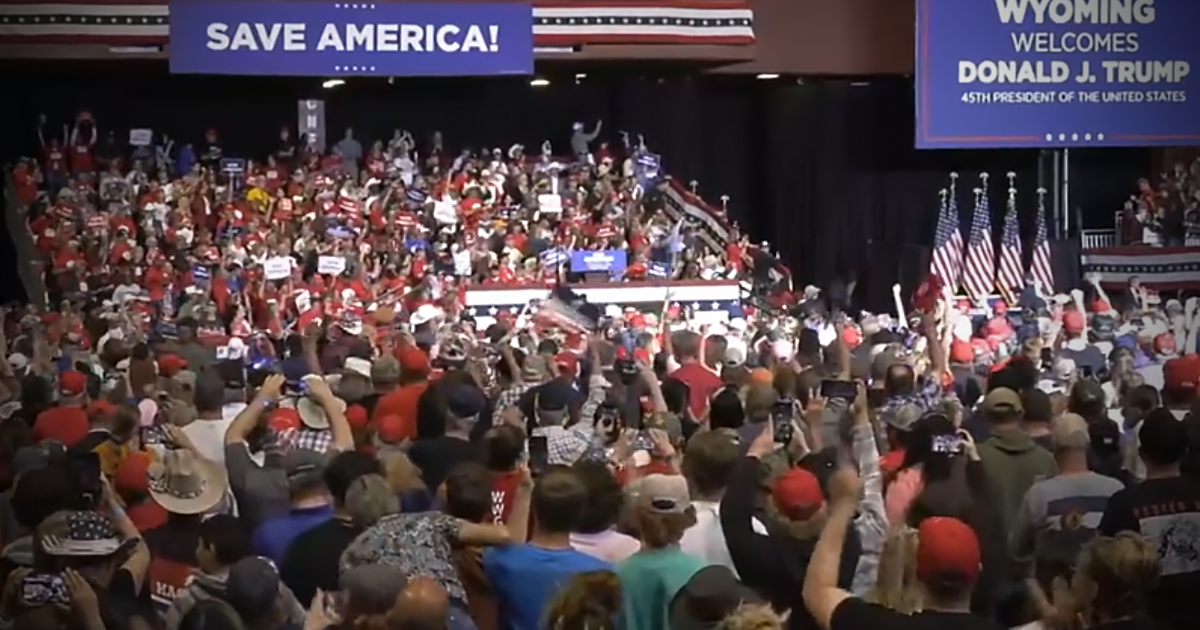 Leftist ‘junk news’ site Raw Story was forced to issue a retraction after they claimed President Donald Trump could not fill up a stadium in Wyoming for his rally, when in fact it was considered one of the largest crowds for a political event in the state’s history.

On Saturday, Raw Story’s Bob Brigham wrote for the leftist news site that President Trump “fail[ed] to fill Wyoming arena at rally against Liz Cheney.” Before President Trump arrived on stage at the rally in Casper, Wyoming, Raw Story leapt on to a couple of tweets from reporters, declaring that the rally as a dead loss.

We are about 30 minutes from showtime at the Trump rally in Casper and there are A LOT of empty seats in the arena.

There’s still a line outside, but I’m not sure how many people are waiting to get in #utpol pic.twitter.com/XPCXHSfyxy

Donald Trump was due onstage in Casper, Wyoming ten minutes ago. Arena is still not at capacity. pic.twitter.com/rYLs1wkVG6

However, as President Trump came on stage, the arena was packed with his supporters from Wyoming and surrounding areas. The announcer at the stadium even claimed that the rally was the biggest in the state’s history, something President Trump echoed in a Truth Social post following the event.

Don’t believe the fake news about the Casper rally yesterday. It was absolutely packed— many longtime employees from the Events Center expressed how they’ve never seen a crowd like this before. Wyoming loves Donald Trump! 🤠🇺🇸 #ULTRAMAGA #FireCheney pic.twitter.com/YxOVXz8G52

Earlier this year he drew the LARGEST political event crowd in Texas history.

The MAGA movement is just getting started! pic.twitter.com/ef7JjRaW8H

Raw Story was forced to issue a correction, noting that, by the time the former president spoke, the stadium was filled,” adding that “Raw Story regrets the error.”

The headline was also changed to suggest that President Trump had “finally” filled the arena, suggesting that he was having trouble doing so to begin with.

However, at the time of writing, the original tweet from Raw Story which contains the previous headline, remains up on their official Twitter account, with no tweet either put out independently or linked to the first that corrects the glaring error. The tweet is the 7th result when “Trump Wyoming” is searched on Twitter.

Following the initial blunder from Raw Story, the site published five more articles on the Wyoming rally, including an article that attacked Trump for making a joke about his hair, another that criticised him for talking about the plight of January 6 defendants, and three write-ups of leftist political analysis of the rally from Politico, the Washington Post, and CNN.

Raw Story itself is not only known as a hyper-partisan, left-wing media outlet, but also considered by some researchers to be “junk news,” with multiple instances of Raw Story refusing to fact check or correct stories that were verifiably proven to be false after publication.