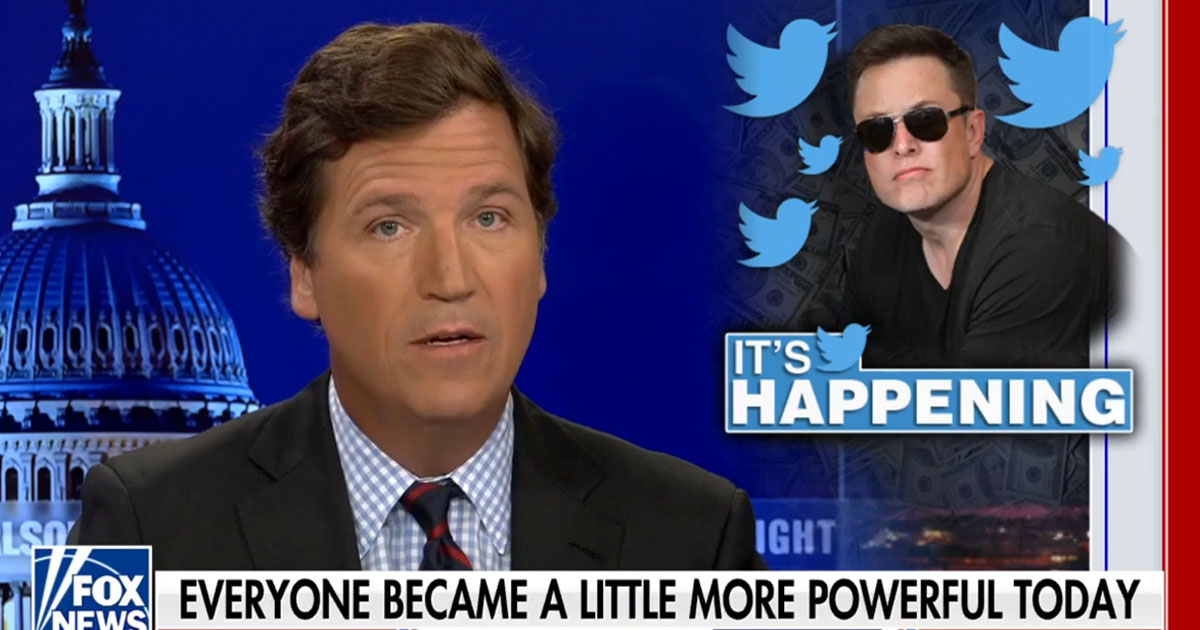 Fox News television host Tucker Carlson praised the acquisition of left-wing social media platform Twitter by African-American tech entrepreneur Elon Musk this week, calling it “the most threatening challenge to the corrupt and incompetent leadership of this country.”

“At this point, you have no choice but to put your hopes in the good intentions of an eccentric billionaire,” Carlson said. “There’s no other option because no one else is coming to the rescue.”

“So, in the case of Elon Musk, we will see how this turns out, but for now, Musk’s purchase of Twitter is the single biggest political development since Donald Trump’s election in 2016,” Carlson continued. “It is certainly the most threatening challenge to the corrupt and incompetent leadership of this country.”

The Fox News host noted that “the scene inside Twitter’s San Francisco headquarters when the Musk deal was announced was akin to the scene when Hillary Clinton lost the 2016 election.”

"Musk's purchase of Twitter is the single biggest political development since Donald Trump's election in 2016. It is certainly the most threatening challenge to the corrupt & incompetent leadership of this country." pic.twitter.com/AAfWw3zBhS

“It is the collective grief of people who thought they were going to be fully in charge, who totally believed they’d be able to rule without limit,’ Carlson said. “Those people learned that actually other people get to talk too and that realization is crushing to them. It’s the one thing they fear and that tells you everything about why those people should never be near power.”

Carlson added, “Who are the tyrants? They’re anyone who is bothered by the idea that other people might get to talk. That is an unfailing test. It’s 100% accurate. Would you allow people who disagree with you to talk? If you wouldn’t, you were a tyrant and tonight the tyrants are grieving.”

“Why are they so mad? Because their monopoly on speech and information, the ability to control what you believe, has been broken,” Carlson said. “So once again, they’re resorting to force to get you to shut up. This is not an attack on Elon Musk … This is an attack on you and your right to speak freely, to express your conscience in public. But for once, it’s not working and the media are infuriated. They’re profoundly threatened by a free internet and so they’re panicked.”

“So Elon Musk is a threat to the weak, say the most privileged and powerful people in our society,” Carlson concluded.