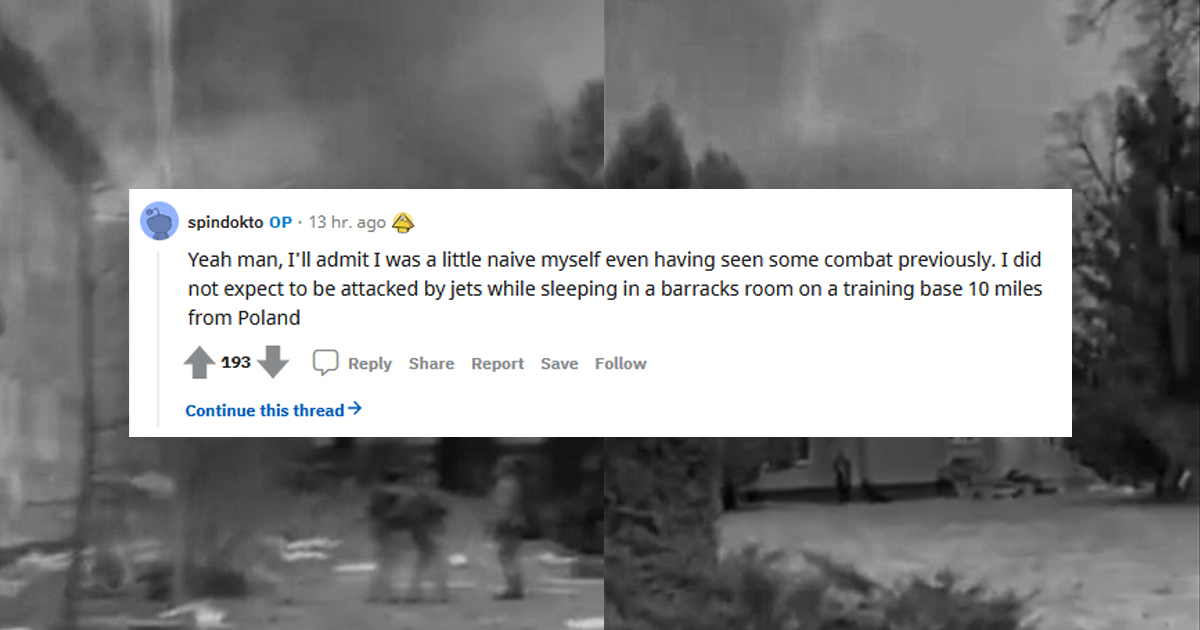 A man claiming to be a member of the Ukrainian Foreign Legion has reportedly left, alongside many new recruits to the legion, following a Russian airstrike on a military base housing the foreign troops near the Polish border.

Yesterday a barrage of Russian missiles struck a large Ukrainian military base near its border with Poland, killing 35 people and injuring another 134.

One American who claims to have joined the Ukrainian Foreign Legion took to Reddit after the strike to explain why he decided to pack his bags and call it a day following the strike. He included a video and photo as evidence he was actually in Ukraine.

Aftermath footage from the missile attack on barracks of some of the volunteers.

Looks like some Redditors got made into chutney pic.twitter.com/DK4EvZCmVP

“Left the Legion,” wrote Reddit user Spindokto after a brief absence from the platform. Spindokto’s previous posts detailed the user’s efforts to get to Ukraine and join the Foreign Legion, and explained that he had experience as a medic serving in the United States Armed Forces.

“It is clear that going to Kyiv with the legion is nearly a f**king death sentence.”

“A medic died the day after he got to the front, another guy tried shooting an AK at an APC and was killed immediately, a 10 man team was nearly wiped out – 8 killed and 2 crawled away.” Spindokto added, “Your body will not be retrieved from the frontlines either.”

The Redditor explained that morale was higher before the missile strike on the Ukrainian base near Poland, but the experience sent many foreigners packing with fingers pointed at the Ukrainian military.

“There were rumors of Russian paratroopers who were outside of the base following the attack,” wrote Spindokto, “and they still wouldn’t give people rifles [or] ammo.”

The Redditor claims the situation became so dire that “A group of SF guys broke into the armory and took what was left” fearing the base would be overrun.

“No one wants to die in an unfair fight,” the Redditor explained. “I kind of want people to think twice before turning their life upside down to go and volunteer.”

Like come on, if you have the Afghanistan mindset in a actual conventional war and think you're 100% safe in a base situated in a country vs. country war you're more than stupid. And why did you volunteer if you're not ready to die? This is why volunteers should be fanatics. pic.twitter.com/ZaKzckNBZt

Ukraine, Russia and the Donbass breakaway republics have all recruited foreign nationals to fight in the ongoing conflict in Ukraine.

Russians have, at the same time, condemned Ukraine’s foreign volunteers as “foreign mercenaries” and has stated that foreign nationals will not be considered legal participants in the conflict.

Russia invaded Ukraine last month after years of disputes regarding the Donbass region. Moscow claims it launched a military offensive against its neighbor to protect ethnic Russians from Ukrainian state violence, while Ukraine and most of the international community say the attack was completely unprovoked.